J-Law demands wage parity for women in Hollywood, while ignoring the role she plays in sidelining older actresses 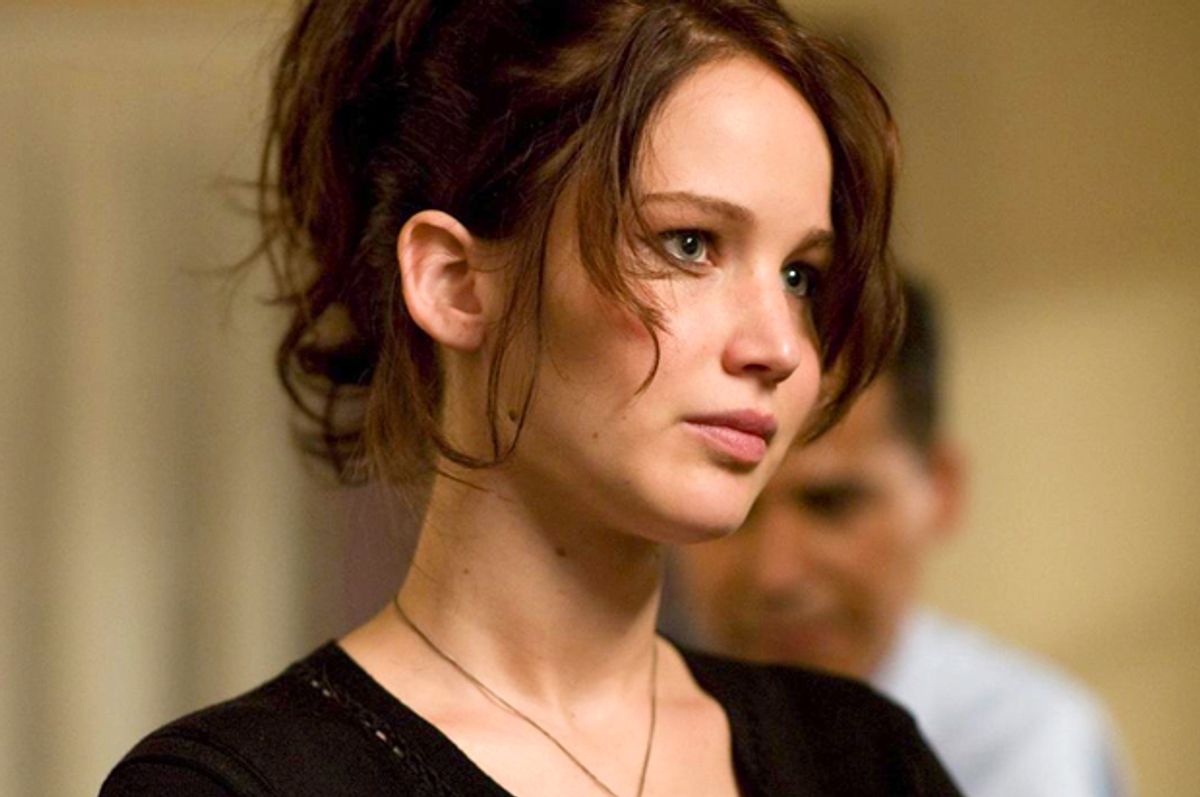 In a recent Op-Ed for Lena Dunham’s Lenny Letter, Jennifer Lawrence took an important stand for equal pay in Hollywood. The actress told Reuters yesterday that she was inspired by her "Hunger Games" character, revolutionary heroine Katniss Everdeen, to take a stand against a system that that treats women who demand fair wages as “bratty” and “spoiled,” while men who negotiate for better pay are applauded for it. In the essay, Lawrence wrote, “I’m over trying to find the ‘adorable’ way to state my opinion and still be likable. ... I don’t think I’ve ever worked for a man in charge who spent time contemplating what angle he should use to have his voice heard.“

While Jennifer Lawrence has joined a Greek chorus of actresses calling out unfair treatment in Tinseltown, there’s one major thing missing from her rally cry: Lawrence's politics seem to ignore many of the intersectional issues that face her peers, particularly those who aren’t 25-year-old white ingenues. She's dismissed claims that she’s too young to be cast in many of the high-profile parts she’s been playing, including the upcoming "Joy," in which her character ages up to 40. “Those kinds of silly questions [about age] don’t really matter to him,” she bragged of David O. Russell, her frequent collaborator. “It’s not like I was old enough for 'American Hustle.' And I was way too young for 'Silver Linings Playbook.'”

At least on the latter note, Lawrence is right: To say she was miscast in these movies is an understatement. While Lawrence was electric in "American Hustle," do you really buy her as an unsatisfied New Jersey housewife and mother — Peggy Bundy meets Betty Draper? After all, Lawrence was just 23 when the movie was released, while the actor who plays her love interest (Christian Bale) was 16 years her senior. And J-Law’s Academy Award-winning role in "Silver Linings Playbook" was written for Zooey Deschanel, who is a full decade older than Lawrence. Her upcoming performance in "Joy" is a similar head-scratcher: Joy Mangano, the inventor of the Miracle Mop, patented the idea when she was in her 30s.

Considering that she’s been so vocal about gender inequality, it’s ridiculous for Lawrence to dismiss ageism as “silly,” primarily because it’s such a pervasive issue in the industry. For instance, when Lawrence was cast as a middle-aged woman in "American Hustle," the Film Experience’s Matthew Eng suggested actresses like Marisa Tomei and Maria Bello for the part. However, Tomei isn’t getting wife/girlfriend roles these days. She’s getting cast as old ladies: In the upcoming "Spider-Man" reboot, the 51-year-old will be playing Aunt May, a part whose previous two occupants—Rosemary Harris and Sally Field—are a combined 156 years of age.

While Lawrence might think age is just a number, it’s one that’s very real for women in Hollywood. Liv Tyler recently referred to being a 38-year-old actress as “like being a second-class citizen,” while Anne Hathaway told Glamour magazine she was losing out on roles to younger actresses. “When I was in my early 20s, parts would be written for women in their 50s and I would get them,” Hathaway said. ”And now I’m in my early 30s and I’m like, ‘Why did that 24-year-old get that part?’” Oscar-nominee Maggie Gyllenhaal likewise reported that casting agents told her she was “too old” to play the love interest of a 55-year-old man. Gyllenhaal is turning 38 this month. Amy Schumer's "Last Fuckable Day" sketch resonates all too well in this landscape.

This illustrates the real problem with Lawrence’s stand on pay inequality: It affects women differently based on intersectional issues of age and race. On Forbes’ 2015 list of the highest paid actresses in Hollywood, only two were women of color. Those were "X-Men: Days of Future Past’s" Fan Bingbing, who is a major star in her native China, and Cameron Diaz, who owes her Latina heritage to her Cuban father. Not a single black actress made the list, let alone a black woman over 40. In a New York Times Magazine profile from last September, Viola Davis said the reality for such actresses is even worse than you think: “You’re going to get your little bitty paycheck, and then you’re going to be hungry for your next role, which is going to be absolutely the same.”

And in a recent speech at the Emmys, when she collected her history-making statue, Davis hammered the point home: “The only thing that separates women of color from anyone else is opportunity.” Viola Davis was speaking about winning the first-ever trophy handed to a black woman for best drama, but the statement rings true here: You can’t get cast as an aging black actress if studios are unwilling to even consider you. While Davis might be one of the biggest stars on TV, the 50-year-old is struggling to get her due at the movies: Her last film role was in a barely released Jennifer Lopez movie, "Lila & Eve." That’s at least better than "Scandal’s" Kerry Washington: Washington doesn’t have a single theatrical release in development. Like Liv Tyler, she’s just 38 and already struggling for a seat at the big-screen table.

As I argued in an Op-Ed about equal pay in the industry, it really sucks to not get paid as much as your male costars, but it’s even worse for the actresses who will never be considered. When it comes to Hollywood’s ageism problem, Anne Hathaway claimed she “can’t complain about it because I benefited from it.” But that’s exactly what actresses should do —especially those with Lawrence's and Hathaway’s clout: Call out a system that benefits some at the continued expense of others who lack the same privileges. Jennifer Lawrence might think it’s stupid to worry about taking roles from older actresses, but I highly doubt she’ll feel the same way in 10 years, when she’s the one told she’s “too old” to play someone her own age.