Ronda Rousey gives terrible sex advice: "If you need lube, then you're being lazy" shows she has no business telling other people how to get off 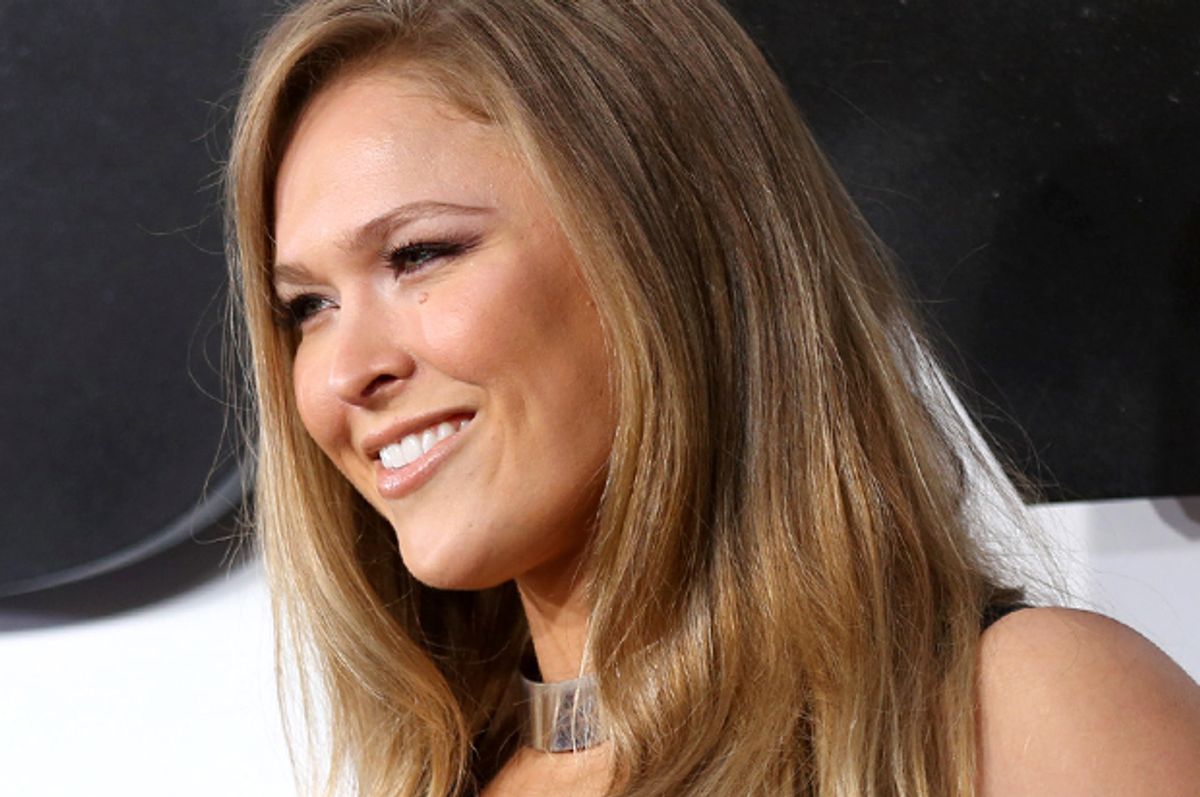 I’m going to start with a personal confession: I’m 39, and I use lube every single time I have sex. I haven’t always felt the need for lube, but as I’ve gotten older, I’ve found it necessary. And guess what? It works wonders. There’s no stigma, drama or delay; when my partner and I move past foreplay, one of us reaches for the bottle of lube, applies it our bodies, and we’re good to go.

You wouldn’t know that there are plenty of other women (and men) of various ages who swear by lube from reading UFC Women’s Bantamweight Champion Ronda Rousey’s advice to Maxim readers. In response to a 36-year-old male reader asking “What should a guy ALWAYS do in bed?” she wrote, in part: “What should a guy always do? Take his time. In general, a girl takes a minute. He needs to get her ready. You should never need lube in your life. If you need lube, then you’re being lazy...and you’re not taking your time.”

A whole book could likely be written about why Rousey is deeply mistaken, but I’ll keep this succinct: Lube is not the enemy. In fact, I’d venture to say that whatever your gender or sexual orientation, lube is probably your friend. Yes, take your time…but take your time and don’t be afraid of using lube to aid you along.

But don’t just take my word for it. Sex educators were unanimous in their responses to me that Rousey is dead wrong. Sex and relationship educator Reid Mihalko said her advice is akin to “telling massage therapists that using massage oil is being lazy.” Aida Manduley, a social worker and sex educator, said, “Depending on the kind of sex being had, lube can be essential because not all our orifices produce the necessary fluids to ensure adequate slipperiness, especially for anal play. If someone is undergoing cancer treatments, going through menopause, or even taking certain medications, their natural lubrication production can dramatically change and decrease. For survivors of sexual trauma, even when emotionally feeling ready to have consensual sex, their bodies may be so dissociated that lubrication production is compromised. None of these things are about people being ‘lazy.’”

There’s even a term for this: “lube shaming.” Because our culture is somehow obsessed with telling everyone else how to live, a simple step toward sexual enhancement like lube can become a minefield—but only if you listen to people who have no business dispensing sex advice, like Rousey.

Want proof that lube isn’t just about aging? Look no further than sex writer Ella Dawson, 23, who started having sex at age 18 but didn’t start using lube until she turned 20. “The only sex advice I would give to my younger self would be to always use lube,” she said. “I thought it was something people used when they weren't aroused, and I'd never had any trouble getting wet. I didn't realize that lube could be used in addition, as opposed to instead of, your own arousal. But then I started sleeping with someone who swore by it because his penis was on the larger side and penetrative sex wasn't always feasible without lube. We broke up years ago now, but I still almost never have sex without it. My vagina is easily irritated by friction, so I can have sex for a longer period of time if we take breaks to apply more lube.”

Another personal experience with lube comes from Jaiya, a sex coach and author of "Red Hot Touch." “After the birth of my son I experienced dryness due to hormonal changes. While I would get very turned on, my body didn’t respond to the turn-on like it did prior to my son being born. We could have for play for hours and still I wouldn’t lubricate. So we addressed the situation with lubricants. Dry sex was painful and left me with tears a few times. But using lubricants helped immensely; no more pain, no more tearing. Eventually my body kicked in and I started to lubricate again.” Hear that, Rousey?

San Antonio-based sex and intimacy coach DeAnn Cope says lube is her first recommendation for many clients. “One of the most common things I see are heterosexual couples who just need lube,” said Cope. “They'll put up big money for doctors and professional help trying to solve vaginal pain during sex, when a $13-$20 bottle of lube is sometimes the answer. I'm shocked when physicians don't start with lube in vaginal pain conditions. If a good silicone lube doesn't fix it, then move forward with other treatment.”

Another sex coach, Dawn Serra, Tweeted that Rousey’s comments were a “sex ed fail.” Why? “Lube is a critical part of sex for many, if not most, people. By claiming lube is only for lazy folks, Rousey is sending two incredibly sex-negative messages: if you need lube, something is wrong with your body, and lube is shameful. It's completely unacceptable,” she told Salon.

Furthermore, lube can be an essential part of safer sex. Serra said one of the primary reasons condoms break is due to lack of lubrication. She touted other benefits of lube as well. “One of the primary reasons condoms break is a lack of lubrication. Medication (even over-the-counter seasonal allergy pills) frequently causes vaginal dryness. Plus, despite common myths that say otherwise, some vaginas don't ever get really wet, even when fully aroused. All of this also assumes a very narrow definition of sex: vaginal intercourse.”

Anne Hodder, a sex educator who’s taught classes such as Sex Toys 101, was frustrated with the framing of Rousey’s comments, which simply compound the pressure men feel to be good in bed. “They make female pleasure and arousal the man’s responsibility. If he and she don’t see the kinds of slippery effects that are expected after a round of oral or manual stimulation, then he’s somehow failing in his abilities while her body is malfunctioning. It doesn’t make her broken if a bottle of lube enters the situation.”

As Sarah Tomchesson, Head of Business Operations of sex toy store The Pleasure Chest, explained, “Women’s arousal cycles do take longer than men's, so taking time to build arousal for your female partner is a great approach along with using lube. Most women need lube at least some of the time because factors like stress, hydration levels and where we are at in our monthly cycle can cause our bodies to create less lubrication.”

To put it more bluntly, “He can lick and suck for days, but that still may not result in the kind of dripping vulva that Rousey has deemed the ultimate goal, but a squirt of a quality lubricant can be an incredibly reliable game changer,” according to Hodder.

Sex educator JoEllen Notte, who teaches a class called “Superhero Sex Shopping: Stocking Your Nightstand For Your Best Sex Ever,” said she often encounters students who defensively dismiss lube by saying, “Oh, I don’t need that!” She believes that for these students it’s often a matter of pride. “They think lube means one's body isn't working correctly,” and correspondingly, that if they don’t need lube, it’s something to celebrate, a mindset only furthered by Rousey’s inflammatory advice. “Statements like Rousey's serve to cement the notion that lube is a mark of flawed sex and in this case it's particularly damaging because she’s telling everyone who needs lube that they are failing,” said Notte.

I’m not arguing that everyone needs to use lube, but I’m willing to say that everyone should not be taking sex advice from Rousey, who clearly has some weird anti-lube agenda. Rousey has already proven that she’s not a role model; maybe Maxim should heed that and hire someone to give sex advice whose responses are actually grounded in science, not opinions that promote misinformation.