Who is Ben Carson trying to fool with his bizarre, insincere rap ad?: "He’s a more refined version of Sarah Palin" 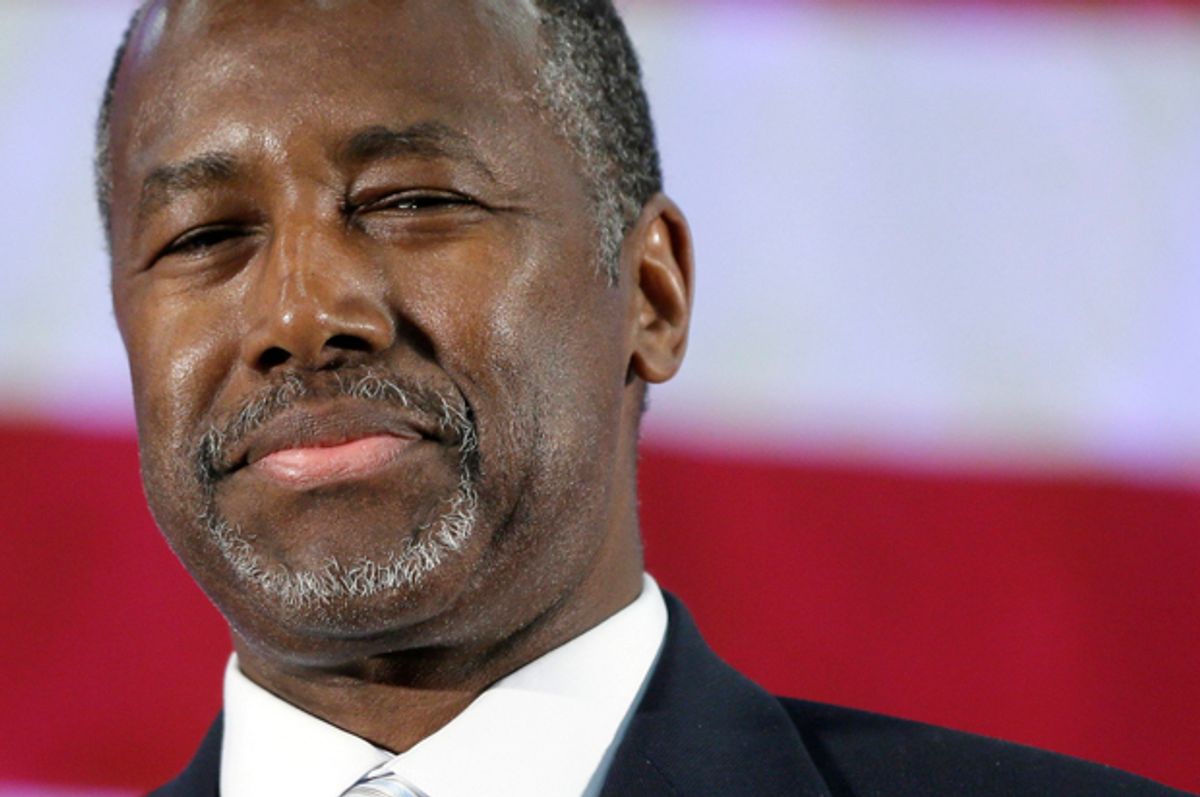 Who knew that “Ben Carson” rhymed with “awesome”? That’s one of the things we learn in a new radio advertisement, complete with rap song, aimed at getting young black voters behind the surgeon’s presidential run.

The ad, which will broadcast primarily in Southern cities starting Friday, also offers Carson ringing traditional Republican ideas. “I’m very hopeful that I'm not the only one that’s willing to pick up the baton to freedom. Because freedom is not free and we must fight for it every day. Every one of us must fight for us because we are fighting for our children and the next generation."

It's a confusing move. So Salon spoke to Marsha Barrett, a historian at Mississippi State University who specializes in political and African-American history. The interview has been lightly edited for clarity.

Let’s start with the ad the Carson campaign has put together. It seems to me some blend of inevitable and bizarre – how does it strike you?

I think it’s bizarre. To me, this idea that you can create a rap ad and then connect with the black community is short-sighted and confused. It’s not much different than if John Kasich or Jeb Bush said, “Let’s put out a rap ad and see what happens?”

Is there anything different because of the fact that Carson is black? I guess the problem is that Carson isn’t someone we think of as going home and firing up Public Enemy after work – he doesn’t seem to be a natural rap listener.

But I did look to see who this rapper – by the name of Aspiring Mogul – is. He describes himself as “the first and only Christian Republican rapper, with a message far different from anything else in music.”

You’re kind of admitting that you’re chasing a niche audience.

Aspiring Mogul has a song on SoundCloud called “The Black Republican.” He says, “I don’t watch the tube, CNN or Fox News. I’m too busy trying to get Rolls Royce red coupe.” And then, “Ain’t got no time to picket march cuz it don’t make no money. I’m trying to get my son and daughter up in Harvard, honey.”

Now, I can criticize this because I do listen to rap music, and part of me is offended by what are supposed to be rhymes. But more important: Ben Carson has chosen a young black man to get his message out, [who’s] talking about not being socially aware because he’s only focused on economic advancement? In a moment when young black people are talking about social activism, and the Black Lives Matter movement, he’s put himself on the outside of the conversations young black people are having today.

Let’s talk more broadly about Carson’s appeal to black voters. The point of this ad is to reach young black rap fans who will presumably vote for Carson if they like what they hear. What kind of following does he have among the black electorate? I know I’m asking you to generalize wildly.

In terms of his appeal to black people. Among my own friends and family, people I went to college with and are now lawyers and doctors, et cetera — the socially aware black people I know, when they talk about Ben Carson, they really only express horror over his comparison of Obamacare to slavery, or the Holocaust, or Noah’s Ark.

My black circle debates why a certain group of white people, or Republicans, gravitate toward Ben Carson. There’s some confusion. There’s a sense that he may seem like the anti-Barack Obama.

There’s an element that’s anti-politician… Maybe he’s a more refined version of Sarah Palin. He may seem safer than some of the other candidates who are outside the establishment.

Some of Carson’s support is with black conservatives. How does this group – which again, ranges a lot – tend to view rap? Two decades ago, rap was politically dangerous for conservatives of all kinds.

Rap holds a central place in American culture among a variety of people in their 20s and 30s. So you can find black conservatives who listen to rap.

The Carson campaign spent a lot of money on this. Does it seem likely to persuade the kind of young voters the campaign is after?

My first inclination would be to say this is going to fail spectacularly. But what if Black Twitter hears this ad; I could imagine commentary going in a lot of different directions. Maybe the attention will cause people to take another look at Ben Carson. I can’t say they’ll find his message appealing at all.

I immediately thought, It was also flooded with slaves! Maybe some people will want to take another look – but I’m skeptical.

Well, I’m baffled -- the continued dominance of Trump and Carson seem to defy every known political law from the past.

A candidate [used to] say one offensive thing, and the campaign is tanked. Now it doesn’t matter anymore. Are we in another universe? It’s very strange.