Before Amy Schumer and her "160 pounds and can catch a d*ck" swagger, this sex-positive iconoclast made her art-world mark

"Peggy Guggenheim: Art Addict" is a compelling portrait of one of the art world's most intriguing players 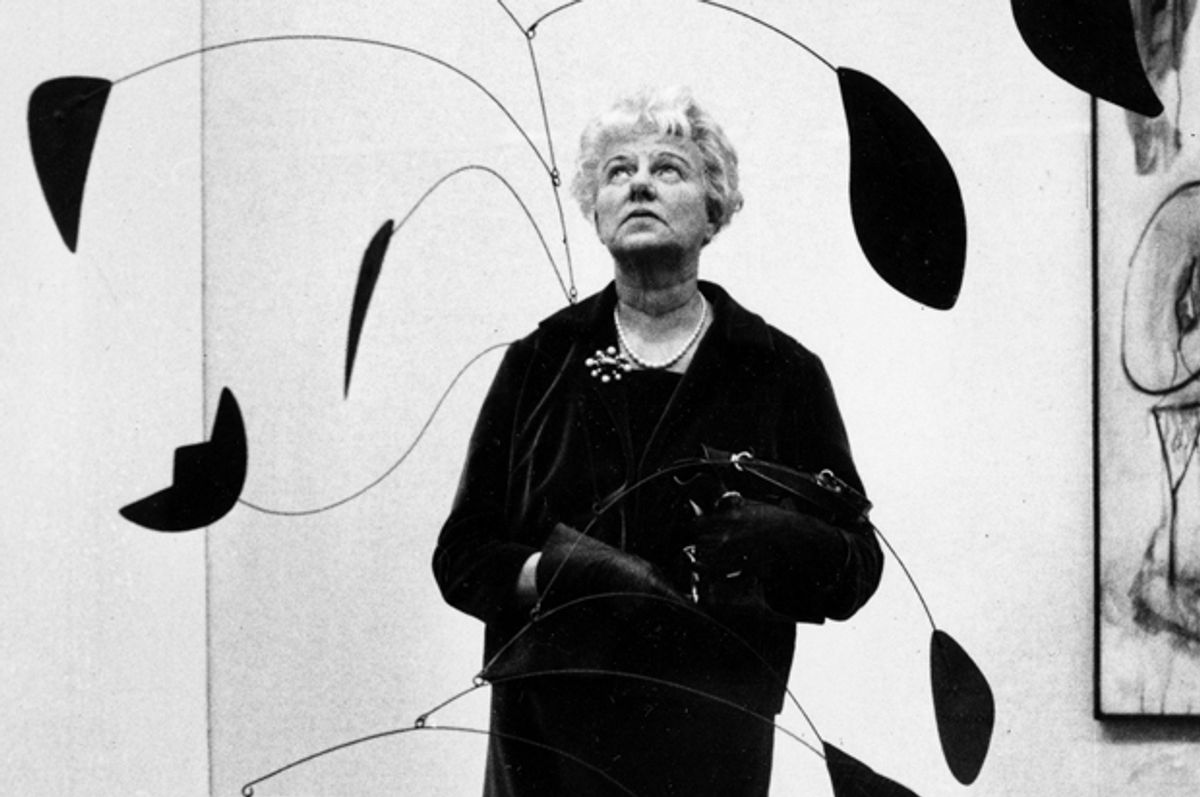 “I’ve lived a life of art and love,” reflects Peggy Guggenheim near the end of her life—a statement that sounds far more sentimental on the page than from her frank late ‘70s audio recordings with biographer Jacqueline Bograd Weld. These recordings, like so many lost cassettes, were excavated from a Manhattan basement decades later, a time by which many had Peggy “pegged” immemorially as the lady art collector with a zest for sex on par with her passion for art.

Put to good use by director Lisa Immordino Vreeland, whose "Peggy Guggenheim: Art Addict" opens nationally this week, these tapes lend a nuanced sense of a complicated woman who can be easily cast aside (eccentric!) or in unflattering caricature (her nose!). Or maybe it’s not that she was so complicated, but that her audacity comes across as complexity given its comparative rarity for women of her time. As the tapes make patently clear, she knew what she wanted—men and art—and that remained, throughout her life, audaciously simple. When asked what pains her most about getting older, Guggenheim bluntly retorts: “I resent that I’m not younger so that I could take lovers.”

Guggenheim’s sexual history has been fodder for psychologists for years, but the candor of the Weld tapes challenge popular assumptions that her promiscuity necessarily derived from low self-esteem and vice versa. “I was sort of a nymphomaniac," Guggenheim admits, with little elaboration. When condescendingly asked to comment upon her 1960 tell-all memoir, "Confessions of an Art Addict," a 76-year-old Peggy dryly responds, "My book was all about fucking."

No explanation follows, leaving one questioning theories that she took so many lovers due to her dead dad, aristo-crazy mother, or because she felt bad about her face. The film instead paints her exploits as resulting in part from brazen confidence. Assessing a series of Man Ray portraits taken in 1924 Paris, the aged Peggy asserts of her younger self, “So beautiful.” And she was.

Perhaps she took her lovers because she took pleasure in the taking, a pleasure not altogether unlike that experienced in amassing one of the preeminent art collections of the 20th century. It is this collection that dominates the film’s visual field: a smorgasbord of surrealism and abstract expressionism. Few moving images of Guggenheim herself are included, and given her ubiquity in creative circles, it’s hard to believe that this is entirely due to lack of availability. Instead, a truer portrait of the woman develops through the iconic canvases and objects she collected, intermixed with stills of the many important men in her life—many, but not all, with whom she was at some point romantically linked.

"Art Addict" can at times be a frustrating film—relying too heavily on white-guy art figures puffily mansplaining her behavior and motives—exposing the fact that as a serious female collector she had few contemporaries. But in the context of the lost recordings, Vreeland never suggests that Guggenheim was not her own agent when it came to what she bought, whom she bedded, and why. If anything, the film imparts a sense of the woman’s abiding self-acceptance, body positive long before there was even a word for it. She may have been one of the first in the country to seek rhinoplasty, but even after it was botched, she was striking a pose for the next half-century. From this vantage, Peggy’s attitude towards her appearance and sex life proves prescient of Amy Schumer’s 2015 “I can catch a dick…” speech. Says Pace Gallery founder Arne Glimcher, forty years younger than Guggenheim, “I found her attractive…there’s something really beautiful about an older woman who knows who she is, who has a great accomplishment. That already is sexy.”

An era before nationwide “Slut Walks,” sociological studies on the isolating effects of promiscuity, or the books of Leora Tanenbaum, an elderly Guggenheim championed her conquests, and didn't let the fact that she wasn't conventionally attractive (a "siren," as one balding talking head puts it) keep her from pursuing art-world hotties young and old. Bohemian exceptionalism aside, such shamelessness would scandalize many today (and it’s no accident that the ad preceding "Art Addict"’s trailer is for a new Hulu sex comedy called “Casual”). Simply Google “promiscuity in older women” and some of the first entries are “Women Have Become Too Easy” and “Why Are Women More Promiscuous than Ever?” Society continues to be much more forgiving of promiscuous women who look a certain way, but Peggy clearly didn't care.

And yet even her 1979 New York Times obituary was nothing if not dismissive:

"Peggy Guggenheim picked herself up from the trials of luxury, a New York bourgeois childhood that she found stifling, and threw herself into wild Bohemian life abroad, going through husbands and lovers as though lots more were in the wings.

Her collection is now worth billions and even her critics have come to admit that she had an incredible eye for art—along with a tenacity for collecting it, saving many paintings from an untimely end by shipping them from Europe around the beginning of World War II. Says Vreeland in a recent interview with Vanity Fair, “As time goes on, Peggy’s place in the art world is taken more seriously. And for good reason: there are few figures in art history who played such a pivotal role in the lives of artists in so many countries…[S]he was revolutionary at that time because she was picking people out of obscurity, before they were known as successful artists, and she believed in them and she did it on her own terms.”

"Art Addict" is at its most powerful when letting Peggy Guggenheim speak for herself, her utter lack of apologia for her personal life raising the question: why would we expect one in the first place? Sure, she was silly and extravagant, stubborn and narcissistic, but the sin of which she was found guilty was arguably more cardinal than any of Kandinsky’s brushstrokes or Pollock’s paint drips: behaving like countless men did at the time.