EXCLUSIVE: Did Vitter miss a 2001 vote honoring fallen soldiers while he arranged a dalliance with a prostitute? 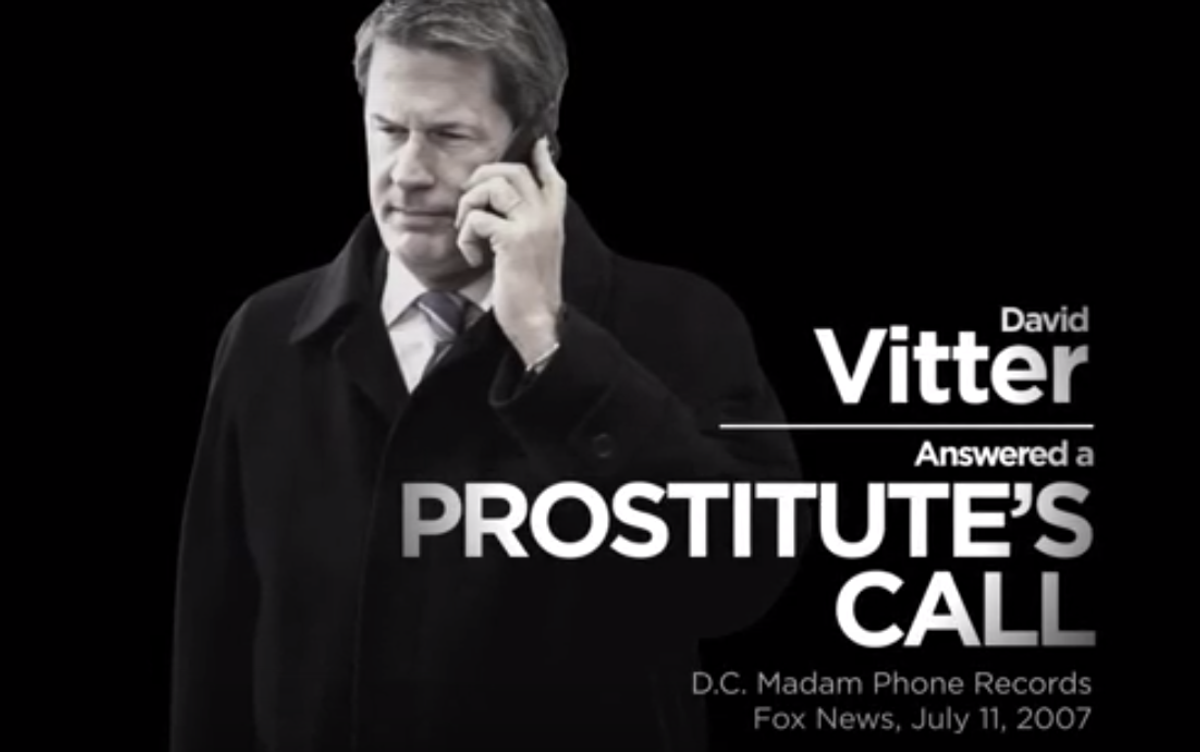 On the evening of Monday, Feb. 25, 1991, only five hours before Baghdad Radio would tell Iraqi troops to begin withdrawing from Kuwait, all hell rained down on a U.S. Army barracks in Dhahran, Saudi Arabia. It was, as the New York Times described it the next day, “the most devastating Iraqi stroke of the Persian Gulf war.” An Iraqi Scud missile struck the barracks, killing 28 Americans and wounding 100 more.

The barracks had been home to the 475th Quartermaster Group, an Army Reserve unit from the small western Pennsylvania town of Farrell.

Reading the grisly details of that night’s events still evokes horror and grief. Here is how New York Times reporter R.W. Apple, Jr., described the aftermath in his Feb. 26, 1991, story, “This morning, under the pitiless glare of portable floodlights, excavating equipment began plowing through the blackened remains of the building. Servicemen joined in the search for the missing, using picks and shovels, as some of the survivors milled about. Many wept.”

Fast-forward ten years to February 27, 2001: On the floor of the U.S. House of Representatives members were preparing to host President George W. Bush, who would deliver his State of the Union address that evening.

Before hearing from Bush, however, the House had some business to conclude – considering a resolution “honoring the ultimate sacrifice” made by those killed and wounded that horrible day 10 years earlier. When the votes were tallied at 5:27 p.m., the resolution passed overwhelmingly, 395-0.

Thirty-five members, however, did not vote that afternoon. Among them was U.S. Rep. David Vitter, a Republican from suburban New Orleans serving his second term.

Vitter may have missed this vote because he waiting on a return call from an escort service based in California that sold the services of women in the Washington, D.C., area. As his colleagues and constituents would later learn, Vitter was a regular customer of the escort service. In July 2007, the New Orleans Times-Picayune would report:

A phone number for Sen. David Vitter, R-La., appears at least five times in the billing records of what federal authorities say was a Washington call-girl operation, the first just four months after he was sworn in to the U.S. House in 1999 and the last on Mardi Gras of 2001.

Under pressure earlier this week, Vitter acknowledged committing a "very serious sin" and that his number showed up in the records of Deborah Jeane Palfrey, who has come to be known as the "Washington, D.C. Madam." An attorney for Palfrey earlier said that Vitter's number was found once in the records, but a search of the documents by The Times-Picayune turned up four more calls to a number once registered to Vitter. The attorney said that clients also used phones in hotel rooms, so that not all the numbers can be traced to individual callers.

The records show that Vitter number was called by Palfrey's service beginning Oct. 12, 1999 and ending Feb. 27, 2001, which was Mardi Gras. Palfrey has said she was running an escort service that her employees were instructed not to engage in sex acts. But federal prosecutors say she was running a prostitution ring that netted more than $2 million in assets.

Where, exactly, was Vitter when the House voted that afternoon to honor these fallen soldiers? That’s not clear and Vitter and his staff steadfastly refuse to respond to questions about his 2007 prostitution scandal. During his run for Louisiana governor this year (he’s in a Nov. 21 runoff with Democratic state Rep. John Bel Edwards), Vitter has been asked about the scandal only one time by a journalist. He refused to answer the question and the Baton Rouge station that employed the reporter promptly fired him.

Palfrey cannot answer questions about her Feb. 27 phone call to Vitter. She committed suicide in 2008 after her conviction in federal court on charges of money laundering, using the mail for illegal purposes and racketeering.

However, what is generally known about Palfrey’s calls to Vitter and her other clients is this: They were return calls, usually lasting no more than a minute or two. In other words, customers like Vitter would phone Palfrey, request the services of one of her escorts and wait for a call back with the agreed-upon rendezvous location. As described in an affidavit filed in federal court in 2006 by an IRS agent, Palfrey’s customers would meet her women at various residences and hotels in the Washington area.

When Palfrey’s cell phone records became public in 2007 and Vitter’s phone number was found among them, Vitter political career almost ended. But he persevered by refusing to answer questions about the matter, referring only to “a serious sin” in a July 2007 press conference.

After months of ignoring questions from reporters, Vitter seemed to have weathered the storm. The questions eventually ended and, in 2010, Louisiana voters overwhelmingly re-elected Vitter to the Senate.

When he launched his campaign for governor last year, some observers speculated that his prostitution scandal would become an issue. They believed Democrats would not let another Vitter campaign pass without forcing the state’s senator to answer tough questions about his relationship with Palfrey’s prostitution ring.

The problem, of course, has been that little or nothing has emerged this year to give the story new legs. In mid-October, a New Orleans-based blogger released video of an interview with a former New Orleans prostitute, Wendy Ellis, who claimed that Vitter was not only her frequent customer in the 1990s, but became his mistress eventually and that she became pregnant by him. She claims Vitter then asked her to abort the child. Ellis claims she gave up the child for adoption.

The problem with Ellis’ story is that she offers no proof of her relationship with Vitter and the Louisiana news media generally ignored the story. It simply did not meet the journalistic standards of most major news organizations in the state.

Now, however, Vitter faces new charges involving the D.C. Madam. Edwards, Vitter’s runoff opponent, will begin running a television spot on Saturday outlining the facts of the Feb. 27, 2001, missed vote and the fact that Vitter took a phone call from Palfrey less than 40 minutes later. (The Edwards’ campaign released the spot to the press late Friday afternoon.)

“The choice for governor couldn’t be more clear,” the female announcer says, with images of Edwards in uniform on the screen. “John Bel Edwards, who answered our country’s call and served as a ranger in the 82 Airborne Division.”

Next, Vitter appears on the screen with a cell phone to his ear and the image of a national cemetery in the background. “Or David Vitter, who answered a prostitute’s call minutes after he skipped a vote honoring 28 soldiers, who gave their lives in defense of our freedoms. David Vitter chose prostitutes over patriots. Now the choice is yours.”

Did David Vitter, as the ad suggests, choose “prostitutes over patriots?” We don’t know and Vitter, of course, will not say.

Whatever he was doing between 5:27 p.m. and 9 p.m. that night, it appears that he was in Washington that day. A review of C-SPAN’s coverage of Bush’s State of the Union speech that evening clearly shows Vitter sitting in the House chamber later that evening.

For years, many journalists and others have given Vitter a pass on the prostitution charges, explaining that there is no evidence that his involvement with Palfrey’s escort service had any effect on the public performance of his duties. Now, with the release of this new spot, it appears that assumption may no longer be valid.

Did David Vitter skip a vote on the House floor that honored dead American soldiers because he was too busy arranging a liaison with a hooker? Given the timing of the call he took from Palfrey and the missed vote, it’s an important question.

Will the spot and the new questions keep Vitter from winning the governorship? Perhaps.

He’s already behind in the polls. Questions about Vitter’s character, raised by two former GOP opponents and in TV spots aired by a super PAC supporting Edwards, have kept his prostitution scandal in voters’ minds, unlike in 2010, when the issue was only briefly mentioned. That year, Vitter was running against an underfunded opponent and Obama was toxic in Louisiana. Vitter effortlessly tied his opponent to Obama. The election was over before it got started.

This time, however, Vitter had to wage a vicious fight with two Republican opponents – Lt. Gov. Jay Dardenne and Public Service Commissioner Scott Angelle – who were unafraid to question his integrity and moral standing. While the news media generally failed to raise the issue, Dardenne and Angelle attacked Vitter for his moral failings with relish.

Now, he’s wounded, trying to reassemble a fractured party. The last thing he needs is a new development that brings his prostitution scandal to the forefront.

With these new revelations and this new powerful spot from his opponent, Vitter may finally be forced to answer questions that he has avoided and dodged for eight years.

The question for Vitter is this and it is simple: Did he miss a House vote honoring 28 fallen American heroes because he was busy preparing his rendezvous with a prostitute?