My sister did not pass away: This is the secret I need to share

"We don't do suicides," the obituary editor told me. If we can't even say the word, how can we begin to stop them? 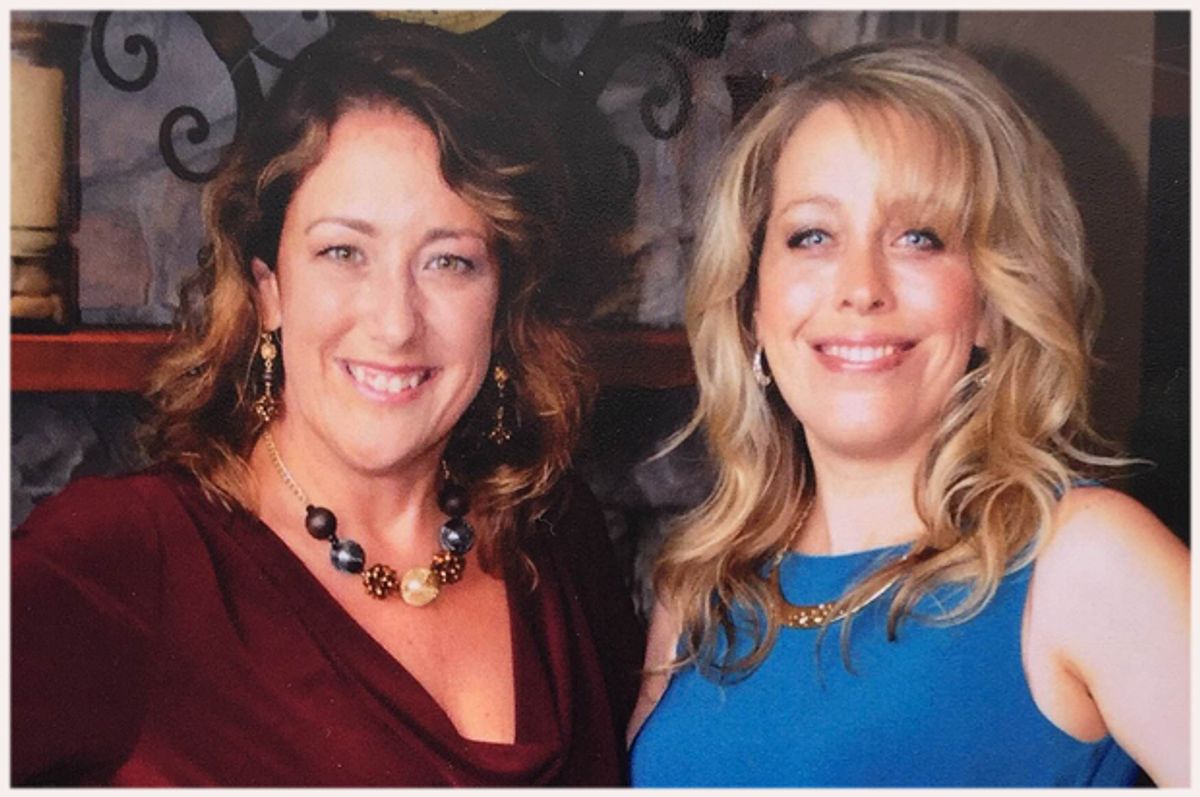 One night a year ago, the week of her birthday, with no warning, my beautiful, vibrant, funny 37-year-old sister took a computer cord, went into her closet in the middle of the night, and hung herself. She had been married exactly two months to the day when her husband found her the next morning. He had been sleeping about 10 feet from where she took her own life. She left behind a son who had not yet turned 18, who had just received a college scholarship. In the spring she would have finished her master’s degree in counseling psychology.

Yesterday I wore my sister’s brown Uggs to my daughter’s band competition.

The oldest sibling in my family of six kids, I pulled my car over when my mom asked where I was. That question never means something good, and my dad had just survived a stroke a few months before. I was sure she was calling to report the news of his death. My brain couldn’t even wrap itself around what she was saying. It kept trying to re-order the information: you mean she’s upset that dad died?

My 11- and 9-year-old kids were in the car, so there was no time to make decisions about how to tell them. No time to create softer phrases about death: she passed away, there was an accident, something terrible has happened and Aunt Beth won’t be with us anymore. I’d rather my kids know the truth, which is how it worked out that day, how they heard it, in cold, hard reality on the side of the road: Aunt Beth took her own life. She is dead.

We all cried as I shakily made arrangements for my husband to fly home from a business trip, their grandmother to drive the 90 minutes so I could get home to my parents who were still in shock, police officers at the house were on the way to my nephew’s high school, about to destroy his senior year and change his life forever.

The scene in a family living room when there is a sudden, tragic death is beyond any imaginable horror. There is nothing to say or do. There are angry phone call demands for information, investigations. Shocked silence shattered by the agonizing wails of a mother who has lost her child are unnatural, horrifying sounds no humans are meant to hear and at first they made me mind-numbingly angry at my sister. My recent stroke-victim father’s blood pressure skyrocketed and we all worried he faced a second life-threatening stroke. How dare she put our parents through this?

Once again, though I hadn’t used it for a career, I found myself thankful for the psychology degree I completed in college. Though I didn’t remember them verbatim, I remembered denial and anger as stages of grief, let them wash over me, couldn’t even imagine how far away the “acceptance” stage must be in the future, couldn’t recall what the middle stages were. There were things to be done, and her husband who’d found her and the understandably grief-stricken parents weren’t able to do them, so I found temporary comfort in action. Calls to coroners and funeral homes had to be made by someone, to-do lists were started.

I researched suicide awareness and prevention websites to choose the language for her obituary and her eulogy. The funeral would be held only four days after her death; the fears of continued stress on my dad’s health were paramount. The extreme-grief stage was so awful, I thought, why would anyone prolong it? She died in the middle of the night on a Tuesday, the funeral was held Saturday, and everyone would be back to work and school on Monday; my retired parents left to grieve and mourn in their tiny one-bedroom apartment. Oddly, I remember thinking that my own mourning would have to be scheduled for a later time.

All summer, my mom wore the purple flip-flops my sister bought in Costa Rica to match a sundress.

Our family will never have answers about why my sister died. There wasn’t a note. If you ever encounter a family struggling with suicide, please don’t ask them if there was a note. I can’t believe it’s comforting even if there is one. Beth struggled with depression, as so many people do. Our lives are carefully balanced silver trays. Things go on and off the trays every day. Sometimes the things on the tray are heavy, sometimes they are light. She was on medications, she was off them. She was on one that she learned was bad for you,  she worried the dose was too high, she tried to wean off. She moved, she got married, she was finishing school – too many things on the tray. She took pain pills for a back injury, got a bad cold, took some cold medicine. Would things have gotten better the next day? Of course. But in one moment for her, in the middle of the night, her tray just got too heavy, and it flipped over. No one was to blame. And as difficult as suicide is to accept, there are no answers. I know that in that moment my loving sister, the brilliant student, the amazing mother would have balanced that tray if she could have, just like she always had.

A the same time that I was trying to get my mind around what had happened, to balance my own pain and grief, I was disgusted to learn that the Philadelphia newspaper, a paper for which she had written a number of opinion columns, would not print my carefully worded obituary that told the truth about my sister’s death. Though the suicide awareness and prevention websites recommend “died by suicide,” I’d asked her husband and son, and the family had agreed to obit language reading “took her own life,” agreeing with me that Beth as a mental health advocate and journalist would have told the truth. The gruff editor I spoke to on the phone told me, “Newspaper policy. We don’t print suicides.”

As a lifelong journalist myself, during the week of my sister’s death, one of the things that was the most disappointing and sad to me was the fact that the newspaper, an institution dedicated to telling the truth, perpetuates mental illness stigma and refuses to tell the truth about suicide as policy.

Suicide is the tenth leading cause of death in the United States; the second leading cause of death among 15-24-year-olds. More than 38,000 Americans die by suicide every year. But adding to the horror of these statistics is the epidemic of shame and the unfortunate stigma we attach to the act of taking one’s own life. How do we, as a society, even begin to come close to solving a problem when we can’t even call it by its name and talk about it openly with our children?

This summer my middle daughter wore my sister’s black boots in a play.

So at the funeral there were no lies or shame or bullshit when it was my turn to deliver the eulogy. My sister did not “pass away.” She did not mysteriously “die at home.” She sure as crap wouldn’t want me standing up there talking about how she was “with Jesus and the angels now.” The only thing that got me through that shit show of a funeral at the wrong-religion church (it damn well wasn’t at the church where we spent our childhoods because the Catholics have the same opinions on suicide as the newspapers) was hearing my sister’s delightfully cackly laughter echoing in my head at how uncomfortable everyone was, squirming in their seats at the hellfire-and-damnation speech of the near-Jehovah’s-witness-level recruiting by the used-car-salesman of a preacher.

Though writing the obituary and the eulogy were horrible, the worst thing I had to do in the first week after my sister died was to pack up the clothes in her closet; the closet where she ended her life. I didn’t even know how I was going to turn the doorknob to that place, but I wanted to pack up her things so that her husband wouldn't have to see them. My sister loved shoes; she had at least 100 pair.

One of my daughters works in a consignment shop, so the plan was that we’d bring some of her nicer items there to earn money for my nephew’s college fund. Some of her things, seemingly too personal to give away, we kept, including some formal dresses (my daughter wore one to homecoming this fall), jewelry, hats and shoes.

I wore a pair of her black flip-flops every time I went kayaking this summer.

When I first entered the closet, it sucked all the air from my chest, I collapsed onto my knees and I cried. Just the smell of her, to be surrounded by her perfectly organized things, to be in the space where she was in so much pain, to feel the guilt and shame of having not been able to be there for her, it was too much. But then I gathered myself (my mom was in the other room, and this was no time to fall apart; I had literally written “cryaking” on my calendar for Monday, which meant if I made it through this hellish ordeal, I planned to take my kayak out and cry for an entire day). I gathered the boxes and bags and I let myself be comforted by action. I folded and sorted and organized to still my grief.

My first instinct had been to consign everything of my sister’s. I didn't think I wanted anything of hers, because I thought it would hurt too much to be reminded of her, but now I find comfort in carrying her purse or wearing a pair of her earrings because it's like she’s there at so many times when I miss her. Instead of seeming morbid as I initially worried it would, it's actually very comforting and helps me continue to hear her voice. Grief is such an awful thing—it comes unexpectedly and sometimes punches you so hard that if you’re driving a car, you have to actually pull the seat belt away from your body to allow for the space it takes up inside of you.

So no, we will not pack up my sister’s things, quietly consign away her life and speak about her in hushed, embarrassed tones. Tut-tut, taken away too soon, so tragic. We will walk proudly down the street, sometimes in more outrageous heels than it ever would have occurred to us to choose, and we will celebrate her life. We talk. We will take care of each other. We will ask each other if we’re OK. We will go to therapy appointments, and take our medicine every day because mental health is just as important as physical health.

It's a striking coincidence, but for some reason my mom, my three daughters and I all wear my sister’s shoe size. Beth would’ve loved seeing two of my daughters and me fighting the other day over who was going to wear a pair of her boots to the haunted hayride -- she loved those places every fall. She is with us when we wear her shoes, but of course none of us will ever fill them.