According to this guy, Starbucks went too far when they debuted a plain red cup this season 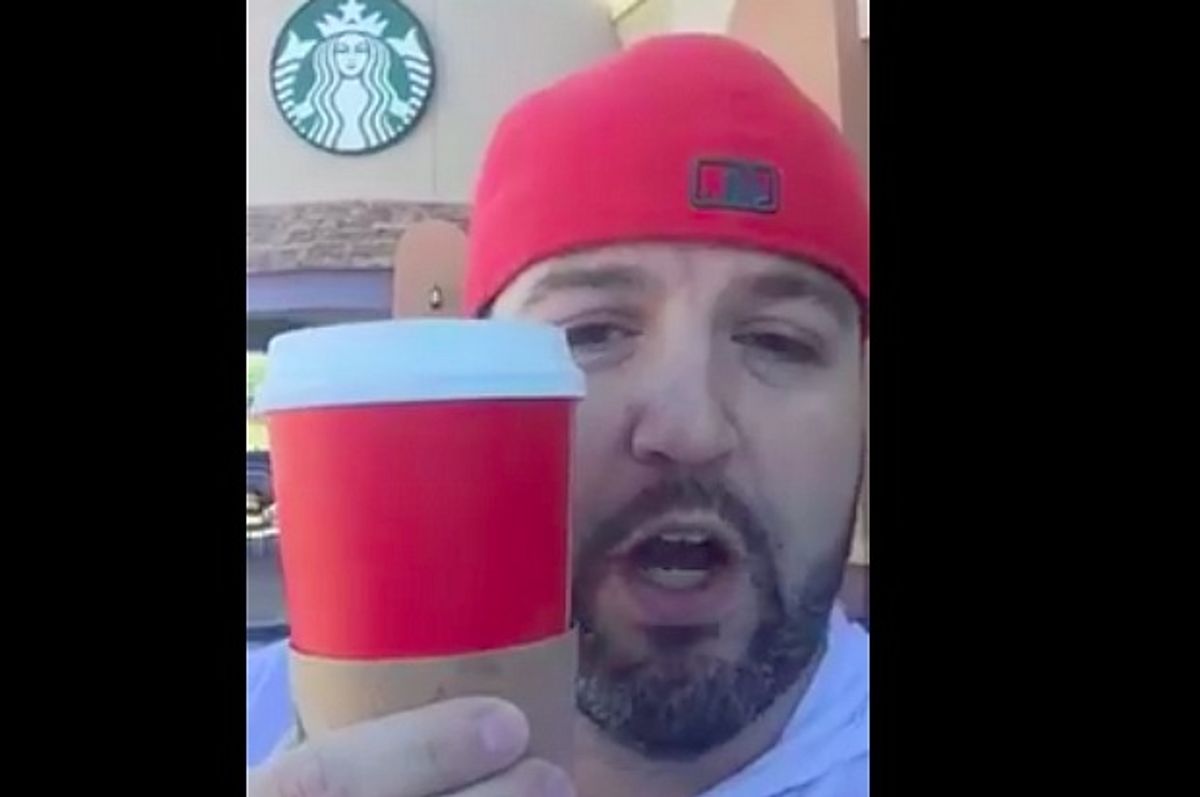 The War on Christmas Season starts earlier every year. Days after Starbucks announced the ritual switch from white cups to red that signals the traditional end of Pumpkin Spice season — complete with custom emoji and everything —  the paranoid culture warriors found this season’s cause célèbre. This year’s #redcups are just that — red cups, vaguely reminiscent of the lowly Solo cup, even, stripped of decoration other than the ubiquitous Starbucks logo. And people are pissed.

Not just any people, of course, but the people who readily share videos on Facebook posted by a guy named Joshua Feuerstein. If you were thinking that it was time the Christian right found its very own Guy Fieri, wait no longer. Feuerstein’s a professional fundamentalist Christian social media evangelist — sure, that’s a thing — specializing in carefully-orchestrated videos designed to go viral like “Dear Mr. Atheist … allow me to destroy evolution in 3 minutes!” Feuerstein, who is quite a bit rougher around the edges than your average Duggar, sports a kind of Fred Durstian throwback bro-aesthetic to go with his incredibly shallow sense of where faith and public life should and could intersect.  And now he’s taking Starbucks down, because the coffee chain had the audacity to eschew the “winter seasonal” graphic designs that decorated red cups in previous years in favor of a simpler look.

Where have the snowmen and reindeer of yesteryear gone? Why does Starbucks hate Jesus?!

In a video that has been viewed more than 7 million times at this time, Feuerstein opens with a little joke that he’s hoping will get him a job on the Trump campaign: “I think in the age of political correctness we’ve become so open minded our brains have literally fallen out of our head. Did you realize Starbucks wanted to take CHRIST and Christmas off of their brand new cups? That’s why they’re just plain red.”

Feuerstein continues: “In fact, do you realize that Starbucks isn’t allowed to say Merry Christmas to customers?" Shots. Fired. “I decided instead of boycotting, why don’t we start a movement?” St. Paul would be proud, bro.

Here's the plan: He went into Starbucks and placed his order, and when the cashier asked his name, he gave them the Fake Starbucks Name to end all — “I told them my name … is Merry Christmas.” DUN-DUN.

“So guess what, Starbucks: I tricked you,” he continues with all the emphatic gravitas of one of George W. Bush’s less lucid moments, “into putting ‘Merry Christmas’ on your cup.”

Feuerstein wants “all great Americans and Christians” to do the same and “take your own coffee selfie” — Jesus, take the wheel — and post with the hashtag #merrychristmasstarbucks, and while the terms "great Americans" and even "Christians" are up for debate here, there are people who are taking him up on this asinine prank. This is why Hobby Lobby should just open a coffee shop and a pharmacy inside every store so the people who follow this guy won’t ever have to be offended by the secular world they live in ever again.

And then (I am not making this up) he pulls out a gun. America! “Starbucks, guess what — just to offend you, I made sure to wear my Jesus Christ shirt into your store AND since you hate the Second Amendment, I even carried my gun.”

Starbucks REMOVED CHRISTMAS from their cups because they hate Jesus ... SO I PRANKED THEM ... and they HATE IT!!!! #shareUse #MERRYCHRISTMASSTARBUCKSFollow --> Joshua Feuerstein