The scary lessons of Matt Bevin: What we can learn about American politics from the right wing's destructive anti-Medicaid crusade

Kentucky has a new GOP governor who promises to end the expansion of Medicaid in his state. Here's what it means 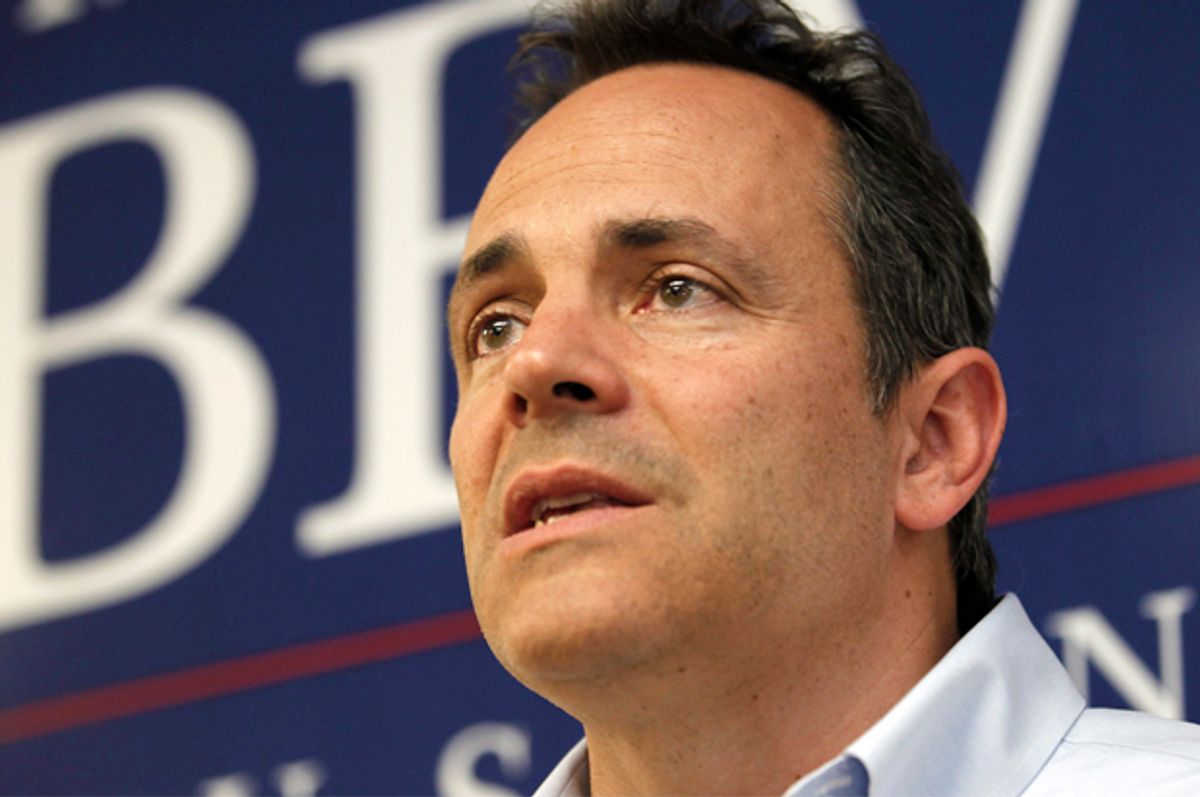 Conservative opposition to the Medicaid expansion is killing Americans and costing states money.

Carter Price, a mathematician at RAND Corp. found in a study of Pennsylvania that expanding Medicaid would add $3 billion to state GDP and support 35,000 jobs. In an early study (from 2013) with Christine Eibner, a senior economist at Rand, examining the 14 states that had at that time refused to expand Medicaid, Price and Eibner find that, “we project that fully expanding Medicaid eligibility could reduce mortality by 90,000 lives per year. The mortality reduction would be only 71,000 lives per year if fourteen states opted out of the expansion.” Research by Samuel Dickman and colleagues at Harvard and CUNY suggests that the failure to expand Medicaid will lead to 7,115 to 17,104 deaths, 712,037 additional people suffering from depression and 240,700 people with catastrophic medical bills. A recent Urban Institute study finds that “Six states would see their uninsured populations reduced by about 40 percent or more if they implemented the Medicaid expansion.” Full expansion would lead to 4.3 million people getting insurance and dramatic reductions in uncompensated care (between $5 billion and $10 billion).

The recent election of Matt Bevin in Kentucky puts one of the most successful Medicaid expansions in peril. Two new studies suggest worrying realities about what caused states to expand Medicaid: that race may play a key factor, and that right-wing activists have significantly hampered reform.

A vast political science of the Medicaid expansion suggests that politics, not a state’s need, determines whether it takes advantage of the opportunity to expand Medicaid in accordance with the Affordable Care Act.

A study by Charles Barrilleaux and Carlisle Rainey finds that neither the percent of people uninsured nor the percentage of population supporting the expansion had a statistically meaningful impact on a governor’s decision to expand Medicaid. Rather the strongest variables were whether Republicans controlled the statehouse, Obama’s share of the vote in 2012, and the governor’s party allegiance. Other research confirms that political considerations were more important than economic ones.

“No evidence was found that state resistance was related to economic factors, including overall state resources, the level of fiscal stress, or the new costs states would incur as result of reform.”

In an early study of the Medicaid expansion, political scientists Timothy Callaghan and Lawrence Jacobs find that administrative capacity also strongly predicted adoption of the Medicaid expansion. This is partially because Democratic governments have stronger administrative capacity in general -- Republicans tend to weaken the state from the inside. There is also some path dependence at play: States that had increased generosity of programs in the past were more likely to accept the expansion, even those under Republican control. Jacobs and Callaghan also find that richer states were more likely to accept the expansion (which is disappointing, since the poorer states have residents in more dire need of the expansion). The evidence strongly suggests that politics, not economic factors or the rate of the uninsured, determined whether a state would expand Medicaid. But what political factors were decisive? New research sheds light on the subject.

A new paper currently under review by University of Chicago professor Colleen Grogan and Ph.D. student Sung-geun Ethan Park finds that racial animus may have played a role in whether a state expanded Medicaid. Grogan and Park find, optimistically, that public support for the Medicaid expansion partially predicts whether Medicaid is expanded. (In 33 states, the government acted in accord with majority will.) They find a stronger role for public will than Barrilleaux and Rainey because they examine support for the Medicaid expansion, rather than the ACA as a whole. However, Grogan and Park find that a key determinant of whether a state ignored the majority’s opinion was the size of the black population in the state. Even with several controls (including party control and strength of competing interest groups) they find:

This confirms the hypothesis of many pundits who have noted that the expansion of Medicaid hasn’t occurred in many states with large uninsured black populations who otherwise would have benefited immensely from the law. As I’ve noted elsewhere, there is an incredibly large literature suggesting that policymakers are less responsive to constituents of color than their white constituents.

Study 2: The Koch brothers go to the statehouse

“GOP-leaning or dominated states have been most likely to embrace the expansion when organized business support outweighs counterpressures from conservative networks."

Hertel-Fernandez, Skocpol and Lynch find a major divide in conservative organizations, with more mainstream business organizations often supporting the Medicaid Expansion. They cite a lobbyist who tells them that the Chamber of Commerce was almost “leading the charge” for the Medicaid expansion, out of fear that the state would leave money on the table.

On the other hand, strongly ideological groups, like Americans for Prosperity (a Koch group) and ALEC (American Legislative Exchange Council) and the State Policy Network (an association of far-right policy organizations) universally opposed the Medicaid expansion. What they find is that where the business organizations were stronger, the Medicaid expansion would pass, even in a Republican-dominated state (Michigan). On the other hand, in many cases the more ideologically extreme activists dominated, like in Virginia, which despite having a Democratic governor, did not expand Medicaid because of strong opposition from Americans for Prosperity and the American Legislative Exchange Council (even though the expansion would have benefited the state immensely).

After years of researching the Koch organizations for a similar research project, Hertel-Fernandez and Skocpol find that they now rival the Republican Party in spending power (see chart). Skocpol writes that, “the Koch network parallels, rivals, and leverages the Republican Party itself, both nationally and in most states.” As the chart below shows, the national GOP committees are now far weaker than they were in the past, while extra-party organizations, particularly those funded by the Kochs, are far better funded. The result is that in the 2016 election, the Koch network may well spend more than the GOP to influence the election. This helps us understand national politics (for instance the rise of Paul Ryan over John Boehner) but the results are even more disturbing at the state level. The power of the Kochs has led more and more Republican governors to ignore the desires of their constituents in order to serve the Koch agenda. As the Kochs grow even more powerful, it will be difficult for even the very conservative, yet pragmatic politicians to be able to govern (like Ohio Gov. John Kasich, for instance).

Obamacare was designed around the premise that business conservatives would accept the expansion because it was good for business and that Republican governors would act pragmatically. But business conservatives don’t always rule in the Republican Party, and in states where they don’t, governors have sacrificed the health of their citizens and their budgets in pursuit of ideological ends. Future political battles will surely have even higher stakes, as what remains of the tattered safety net in numerous red states is further ravaged by an increasingly extreme right-wing network.

The battle over Medicaid, then, has important lessons for the future. First, we must recognize an asymmetry in American politics. While the Kochs now work both within the Republican Party and outside of it, progressives largely don’t match that trend. That’s because half of the left thinks the Democratic Party is little different from the Republican Party and not worth the time, and the other half thinks any challenge to the Democratic Party is tantamount to treason. But these aren’t helpful ways of thinking about politics.

As I’ve noted before, progressives need to learn from the Kochs and think about how to pull the Democratic Party toward their aims. David Koch initially ran as a libertarian, but then realized that was a silly idea, at least in the American context. Since then, he and his brother have created a powerful non-party infrastructure. Such an infrastructure simply doesn’t exist on the progressive side (and not for lack of trying). This is partially because mainstream Democrats aren’t interested in the fractious debates that occupy the right. But the alternative to the fractured debates is the reality that currently face the left: Without a state and local infrastructure independent of the Democratic Party, they simply can’t mobilize the way the right can.

Second, this research shows that racism may be playing a role in state failing to expand Medicaid. As I’ve shown, there’s evidence that racism affects other important policies, like Temporary Assistance for Needy Families (TANF). At a minimum, Republican governors are prone to ignore the policy preferences of their Bblack constituents.

The final lesson is that progressives can influence change -- when they mobilize -- and that change can profoundly impact people. It’s all the more disturbing, then, that in their research, Hertel-Fernandez and Skocpol find that:

“the right has treated state-level decisions about building exchanges and Medicaid expansion as major political fights. But the left in general has not recognized that pressing for full health reform implementation in all states presents a huge political opportunity to strengthen citizen faith in government and to further economic and racial equality... Strikingly, SiX itself has not made it a top priority to fight for expanded Medicaid in the 20 holdout states, even though these struggles happening right now.”

The fact that these battles could be won makes this all the more shameful. The Medicaid expansion battle is one of the most glaring signs of both the possibility of progressive reform and the grave consequences for failing to enact it.