"I have really nothing better to do," Trump said. And did they ever write him some awful, nothing material 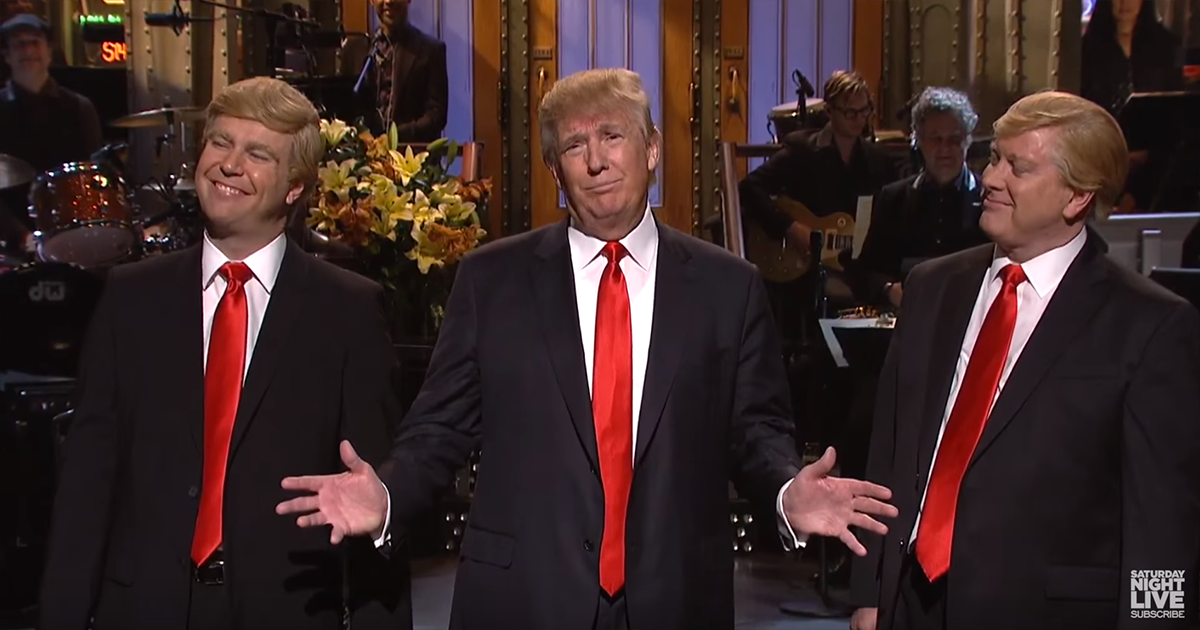 Well, last night was the big night for Donald Trump to appear on "Saturday Night Live." There was plenty of criticism of the appearance, and some thought it was shocking that Lorne Michaels even let it move forward, but who could resist the ratings The Donald provides.

Trump began the evening with an acknowledgement that he is a controversial candidate, but assuring the audience he's a nice. Almost as if he anticipated the audience fearing he'd to start hurling insults at them. "I don't hold grudges against anybody," Trump began the show saying. "Like Rosie O'Donnell." Trump tried to be self-deprecating, poking fun at himself, but most of the jokes fell flat.

“A lot of people are saying Donald, you’re the most amazing guy,” Trump said. “You’re brilliant, you’re handsome, you’re rich, you have everything going for you. The world is waiting for you to be president. So, why are you hosting Saturday Night Live? The answer is I have really nothing better to do.”

With old cast member Darrell Hammond and current Taran Killam who have both played Trump in the past, the host tried to seem cool about their mockery of him. “They’re great,” real Trump said. “They don’t have my talent, my money or especially my good looks. But you know what, they’re not bad.”

Ahead of the show, the Deport Racism PAC offered $5,000 if any audience member would stand up and disrupt the show by calling Trump a racist. Someone did take them up on the offer.

Trump didn’t appear in the episode’s cold open, which was about the Friday evening First In The South Democratic forum in South Carolina hosted by MSNBC's Rachel Maddow. Once again, Larry David was the perfect Bernie Sanders, but coming face to face with three Donald Trumps must have been a little weird. But undeterred, he returned to take up the offer calling Trump a racist.

“As a businessman I can fully respect that,” Trump replied.

Deport Racism even tweeted that they were absolutely honoring the contribution from David with the reward:

As for Trump on stage with two other fake Trumps for the Trump-off, he was as honest as a Trump can be: “They don’t have my talent or money or especially my good looks,” Trump said.

The only good Trump humor came oddly enough, not from him but from Drunk Uncle who appeared in the "Weekend Update." The segment went after Ben Carson in the best possible way, perhaps making the show worth watching for the night. He was mysteriously apocalyptic like he was giving some untold Mayan mythology. He wouldn't explain why, but he said Trump is the one. “He’s perfect,” Drunk Uncle said. “He’s like a big, gold, beautiful Monopoly man.”

With only 12 solid minutes in the 90-minute-long program, Trump didn't generate a heck of a lot of buzz. He remained uninteresting, refrained from being offensive and if my boyfriend is any indication, it was was a pretty big snorefest. After Hillary Clinton mocked Trump with an unforgettable impression, it must have been difficult for Trump to top. Maybe he didn't even try.

Check out a few videos below including the bizzare Trump ones:

Trump on not being in the next sketch where he says he'll live tweet it: