Man-making, not man-breaking: How we expect boys to prove their manhood on the football field 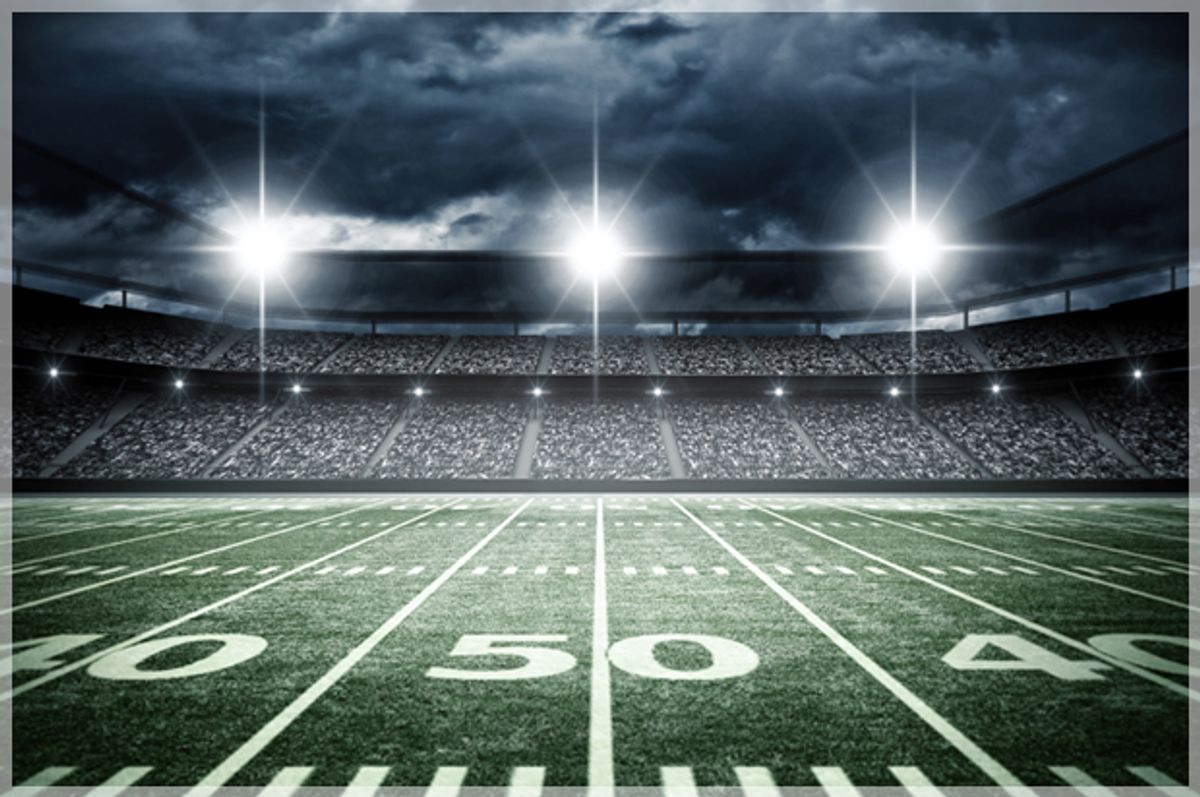 In September, 17-year-old Evan Murray, a quarterback for the football squad of New Jersey’s Warren Hills Regional High School, died of an injury sustained in a football game.  According to reports, his death was a shock to those who saw him walk off the field; after suffering a blow in the backfield, he looked woozy, but he gave the crowd a thumbs up to signal that he was OK.  Like a good field general, he tried to allay others’ worries while disavowing his own.

But by day’s end it was clear that there was reason to worry; Murray, a three-sport varsity athlete, died hours later, and while the exact cause of his death has not been determined, no one refutes that it was the result of violent confrontation on the culturally hallowed ground of a football field.

In the aftermath of such tragedy, we take solace in its rarity. Over the decades, football leagues at all levels have required improved protective equipment, penalized dangerous tackles, and instituted stricter concussion protocols to make the game safer. And yet tragedies still happen, begging us to wonder, if only passingly, whether these measures are a band-aid on a much larger problem. Perhaps in a nation obsessed with football, it is more jarring -- not to our bodies but to our notions about manhood -- to make more profound change to the game.

Indeed, in our cost-benefit analysis of football’s value to boys, we’ve decided that the mental and physical attributes cultivated through playing outweigh the physical risks that would justify its radical alteration. Surprisingly, this consensus view can be attributed not only to public relations campaigns launched since the discovery of chronic traumatic encephalopathy (CTE) in former football players, but campaigns launched over a century ago, when the game’s fate as a national institution still hung in the balance. One of the most prominent of early football promoters was President Theodore Roosevelt, who, at the turn of the 20th century, implored American males to “hit the line hard.” But more influential in the end was a man named Walter Camp, once known throughout the country as “the Father of Football.” During the relative peace between the Civil War and World War I, Camp successfully convinced Americans that young men needed simulated war to harden them and thwart their emasculation. In lieu of real battlegrounds, he helped to carve out space on high school and college campuses where he vowed that boys could be turned into effective men better than anywhere else; that space was the football gridiron.

In Camp’s view, such manly transformations required a high degree of physical risk, for how else does a boy build up courage than by confronting the possibility of grave physical harm? With his cadre of rule makers, Camp amped up the physicality of British rugby to create a uniquely American game that cultivated physical courage in those who played—that is, until boys started being maimed and killed in the playing. The exact number of fatalities in football’s early decades is unclear, because death and permanent injury sometimes occurred, as in Murray’s case, hours, days, even weeks after games, obscuring their direct links to football. Still, by the 1890s, one could count annual fatalities on college and high school gridirons by the dozens, including at some high-profile institutions.  By 1894, President Grover Cleveland banned the annual Army-Navy game in reaction to press accounts of unwarranted brutality in the game.  College officials at Columbia, Alabama, and Wake Forest simply banned football altogether.

But Camp was convinced that the stoicism and physical hardening the game cultivated in boys shouldn’t be discouraged. In its purest form, football was man-making, not man-breaking, he avowed; it was forces external to the game that led to the cheating, slugging and consequent injuries that debilitated.  For a study he published called "Football, Facts, and Figures," he surveyed thousands of former players and coaches and declared the evidence conclusive: American boys needed the physical rigor of football to become virile and effective leaders of the modern age.

Football legislators thought they had licked the problem of death on the gridiron long enough to quiet critics in the 20th century, but fatalities mounted again at the high school and college levels in 1905 and again in 1909. Camp thwarted these crises with proposals to ever-so-slightly open up the game and beef up the officiating, hence reducing some of the most egregious abuses of bunched-up bodies occurring out of eye-shot of game officials.  He proposed that first downs require 10 yards, up from five; less enthusiastically too, he accepted a very limited version of the forward pass. By 1910 he paid more lip service to proper conditioning and the triage of injury.  The college football rule book now allowed for 15-minute quarters to be punctuated by brief respites in play, and for the game clock to be stopped so that medical professionals could tend to the injured. These concessions were hard to make, given Camp’s contention that football gave growing boys an unsurpassed ability to gut out pain.  And yet rather than require players to acknowledge their fallibility themselves, the onus of detecting their injuries fell to trainers and medical professionals who stood witness on the sideline. As players "walked it off" and refused medical attention, they displayed what Camp liked to think was best about American boys.

Camp might seem detached from the tragedy of Evan Murray’s death since he’s been dead for 90 years and helmets were not even required at any level of play until 14 years after that. But his ideas about manhood persist. Murray maintained a stiff upper lip when he was not OK. By no means is he to blame for his tragic end, but he makes us mindful of how we expect boys to prove their manhood, especially on a football field.