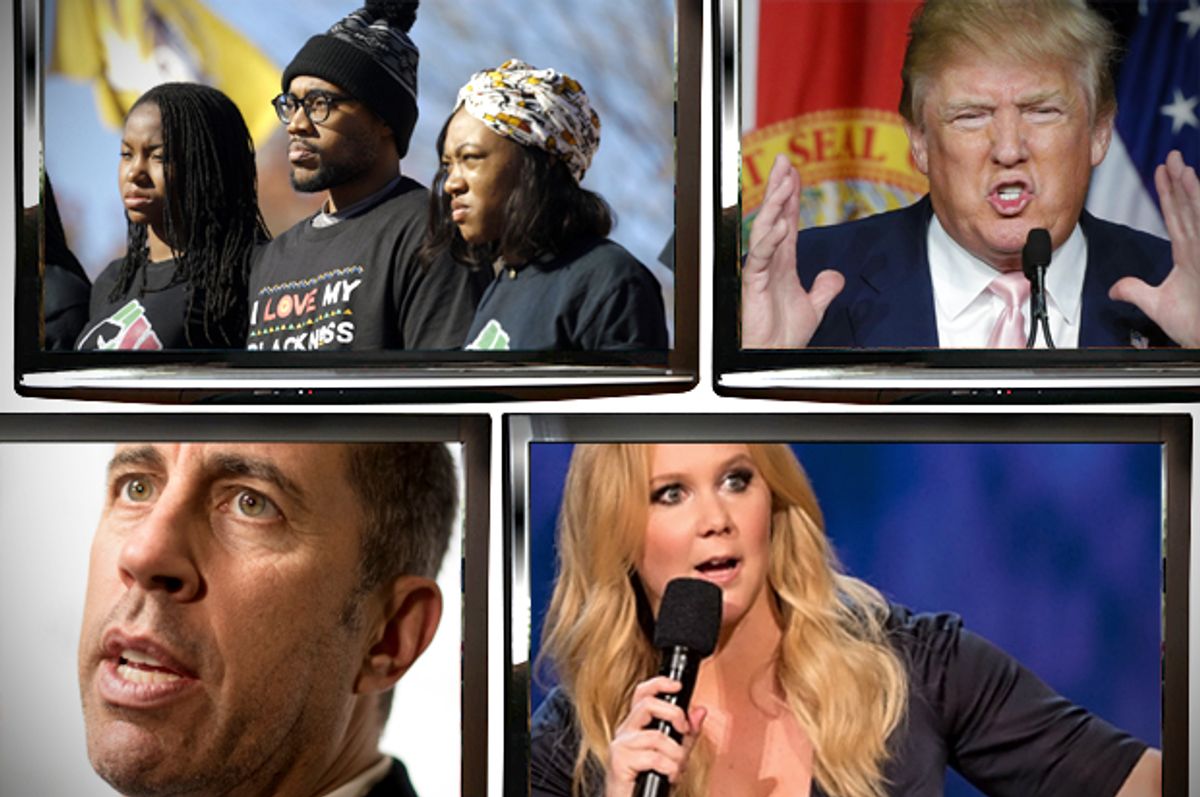 It's been trendy in the past few months for pundits to raise the alarm about the supposedly out-of-control culture of "political correctness" on campuses. Audiences are expected to be appalled at students asking for "trigger warnings" before viewing violent material in class or to tsk at young people for not enjoying the comedy stylings of Dennis Miller, which is surely because they are too "P.C." and not because he's not funny. We're meant to see this as a one-sided war of overwrought lefty bullies attacking innocent victims, be it their elders or even peers who aren't "social justice warriors."

No doubt there are some instances where young people, puffed up on self-righteousness and still sloppy about politics, go way too far with the P.C.-policing. But Monday's resignation of Tim Wolfe as the president of the University of Missouri system in the wake of a wave of racial ugliness on campus should be a reminder that while a few loudmouthed lefties who overplay their hands may be annoying, young people---particularly young women and people of color---are less victimizers than victimized. All this chatter about "trigger warnings" and the supposedly over-coddled young has served to cover up the real story: Young people are under assault from reactionary forces and most of their grievances are not about imagined slights, but about very serious problems they are facing, on and off campus.

As this timeline from the Maneater, the student newspaper at the University of Missouri shows, the revolt against Wolfe didn't come out of nowhere. The accusations that Wolfe was indifferent to a handful of racist incidents on campus are only the tip of the iceberg. It appears that, for months now, the campus has been the staging ground for all manner of conservative attacks on the wellbeing of young people not just on campus, but across the state.

Over the summer, the school tried to take away health insurance subsidies for graduate students, blaming Obamacare. That didn't last long, but it certainly put students on notice that their basic access to health care was under threat by conservative forces. Then the university got caught up in the state's heightened anti-choice politics, after state legislators strong-armed the school into forcing a doctor who worked at the school to quit providing abortions at a local Planned Parenthood. The school also canceled contracts with Planned Parenthood that allowed medical and nursing students to gain hours there, in response to the hoax videos that came out over the summer falsely accusing Planned Parenthood of selling body parts. They eventually came to their senses and renewed the contracts, but, as with the graduate student health program, the message was sent: The school was listening to and willing to interfere with the health care and educational access the students had, to pander to the whims of a bunch of delusional culture warriors.

While all this is happening, black students on campus are reporting a series of racist incidents. Campus protests were invigorated by the protests against police brutality in nearby Ferguson, but it also appears that all this tumult is invigorating racists, too, who are getting increasingly confrontational and provocative. While many news reports suggest that the main complaint against Wolfe was that he was insufficiently responsive to student concerns over this, it was actually much worse: Students report that a car driving Wolfe actually revved up the engine in the face of students who were blocking him in an anti-racism protest, and that one student was bumped by the car. It was likely unintentional, but still the result of treating the very real concerns of students at the center of this culture war whirlwind as if they are nothing but an annoyance.

Any one of these incidents, in isolation, doesn't seem like a big deal, but taken together, it becomes easier to see why so many students feel under attack. Nor is this just about the University of Missouri. Young people in general have very real reasons to feel under attack in this country, and the shit show at Missouri is just a boiling over of pressures being felt from coast to coast by young people.

The culture war is usually discussed in this country in terms of religion, gender, or race, but it's very rarely discussed in terms of age. But young people are definitely feeling the pain. Police violence is disproportionately dished out on young people of color. The attacks on Planned Parenthood are mostly about depriving teens and women in their early twenties access to contraception and STI services---services that women a little older usually can get through other means. Sexual assault on campus is endemic, but Republicans have responded by trying to make it harder for young women to get protection from their assailants.

Even the war over Obamacare has a generational aspect to it. Americans between the ages of 18 and 34 are the most likely to be uninsured and therefore have the most to gain under the Medicaid expansion and federal subsidies available through Obamacare. Surprise surprise, these happen to be the aspects of the law getting attacked the most by conservatives. That, and contraception coverage, which again is needed the most by young women who are having sex but may struggle to pay full price for their preferred contraception methods.

Colleges are becoming a staging ground for this hostility towards young people, where students have to face soaring tuition rates and unmanageable levels of student debt, with elders too busy making fun of "trigger warnings" to worry about the economic destruction being dished out to young adults. Wolfe himself was hired not from the world of academia but from the business world, brought on for his skills at cutting costs more than his commitment to quality education. His hire was a demonstration that the state of Missouri prioritizes slashing education budgets to fund tax cuts over investing in young people's futures.

So yes, young people sometimes do silly or nonsensical things in the name of social justice. But if young people in this country feel that they are under attack from reactionary forces, it's because they are. They struggle to get health care, they pay too much for education, they face dismal job prospects in the real world and far too many of them, particularly young people of color,  have to live in fear of police violence. If their reactions are sometimes imperfect, their heightened emotions in this environment are entirely understandable. As Wolfe's resignation shows, the culture wars on campus are about something much deeper than a few scuffles over Halloween costumes or trigger warnings. While it's always fun to make fun of overwrought student leftists who go too far, it's time to start paying some real attention to the serious problems that young people are really facing, in Missouri and in the rest of the country.