The Fox News host has advanced a "war on cops" narrative, built on lies, in order to smear Black Lives Matter 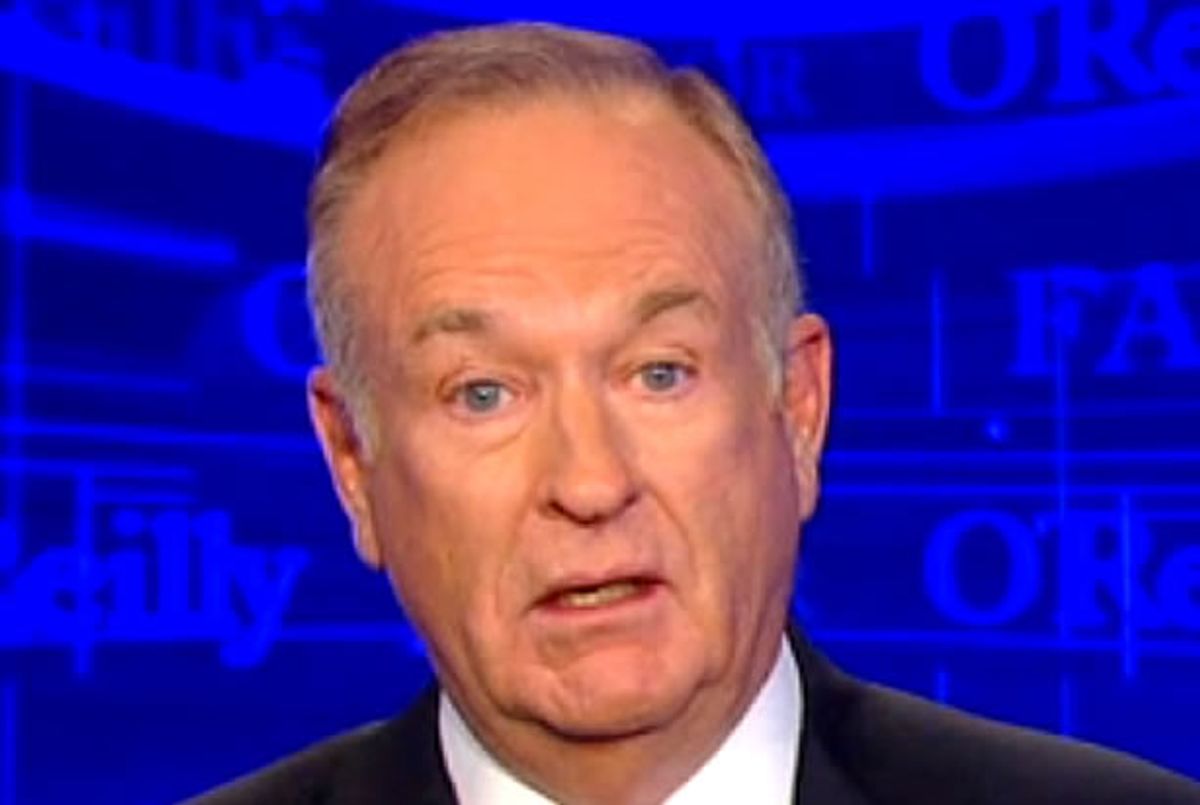 For months, Bill O’Reilly has been waging a war on the Black Lives Matter movement. In his crusade, O’Reilly is joined by other Fox News personalities such as Megyn Kelly and Greg Gutfeld. Chris Christie, Ted Cruz, Mike Huckabee and other conservative elites also heard O’Reilly’s call to arms.

Black Lives Matters believes that police and the state should respect the constitutional rights of all Americas. They are making a simple demand. But, in an America beset by the culture of cruelty, in the thrall of a neoliberal nightmare and reactionary white identity politics, such a justice claim is considered radical and extreme.

America’s police are running amok in the country’s black and brown communities. They are at least seven times more likely to shoot an unarmed black person than a white person. They have been recorded abusing and even murdering African-American children and adults. These victims have names: Tamir Rice, Sandra Bland, Eric Garner, John Crawford III. Many hundreds and thousands more have been killed by America’s police as well. Even more horrific, there is no reliable national data of how many people are killed by America’s cops each year. The police who steal these citizens’ lives are rarely if even punished. “Hands up, Don’t Shoot” is not just a slogan, it is a plea for mercy and for life.

And yet, such basic demands for safety, security and dignity are a threat to Bill O’Reilly and the White Right.

Full and equal human rights for black and brown Americans cannot be reconciled with a right-wing political worldview that is built upon “law and order” politics, and where encouraging white racial resentment and old fashioned bigotry towards non-whites is an electoral strategy.

On his September 1 show, O’Reilly bloviated:

Thus, we have open season on the cops. Today in Illinois 52-year-old Police Lieutenant Joe Gliniewicz shot and killed in the Chicago suburb of Fox Lake. The lieutenant was a 32-year veteran of the Fox Lake Department and father of four children. His killer is still at large, police are looking for three suspects, two white men, one black…Do you believe that the Black Lives Matter crew and other radicals are igniting violence against cops?

You look at the Fox Lake lieutenant who 30 years on the job, the report I got, he was considering retiring at the end of the month. He had 30 more days to go, father of four. And now, look, look at what we're looking at here now. Look, the president now because he weighted into this and weighted in after the Cambridge Police Department and he said, they acted stupidly, and in some other statements that he said, he's got an obligation to come out now and walk some of this back and remind people of the important role that law enforcement officers play and that -- -- no longer will this anti-cop madness. Anti-cop slime be tolerated

It would turn out that Joe Gliniewicz was a liar.

What once appeared to be the killing of an officer in the line of duty turned out to be "a carefully staged suicide," George Filenko, Lake County Major Crimes Task Force commander, said Wednesday.

"This staged suicide was the end result of extensive criminal acts that Gliniewicz had been committing," Filenko said, announcing the conclusions of the investigation into the officer's September 1 death.

The officer had been stealing and laundering money from a police department program that mentored young people hoping to become law enforcement officers, Filenko said. Gliniewicz, a leader in that program, had been stealing money for at least seven years, he said.

Joe Gliniewicz was the perfect martyr for Bill O’Reilly and company’s claims that Black Lives Matter is responsible for a non-existent increase in crime, “the Ferguson effect,” or a fictional “war on the police.” But it wasn't true. Joe Gliniewicz was a liar, and Fox News advanced its own agenda using that lie.

The network is, in essence, a massive propaganda machine used to mix outright lies with questionable truths. In that mode, the assertion and dissemination of the lie is all that matters. The “correction” will not replace the internalization of the narrative and distorted worldview fostered by the initial untruth. Thus, while Fox News’ Shep Smith chastised his colleagues for “being ahead of the news” on Joe Gliniewicz and Black Lives Matter, he is, in effect, nothing more than a convenient cover, camouflage for the network to retain a pittance of credibility.

Taking the long view, Joe Gliniewicz’s dissembling will do little to nothing to undermine or cast doubt on Bill O’Reilly or his lies about Black Lives Matter and a "war on police." The details of the deception are of minimal importance in the right-wing political imagination. Because conservatives are enamored with power, they over-identify with police and other “strong father” imagery. Worshipping police, firefighters, the military, and the flag are part of an infantile and juvenile political consciousness.

And given how America’s police are agents of a racist criminal justice system, conservatives’ -- and the white public more generally -- pray at its feet. They see them as protection from "black crime" that they've been convinced is lurking around every corner.

O’Reilly and others, by their war on Black Lives Matter, are creating a similar environment now. The lie that African-American activists and others are targeting police for violence legitimates the latter’s criminal thuggery against people of color. America’s police are made into victims; those who the police abuse and unjustly kill are made responsible for their own deaths. This is the authoritarian logic of the right-wing political imagination in action.

If violence is committed by police or white-identified vigilantes against the Black Lives Matter movement, Bill O’Reilly and the right-wing media will deny any responsibility. But the truth is undeniable: They are playing a deadly game where white violence against black Americans and other people of color is ginned up by rumors, lies, and disinformation.

Such behavior is nothing new: Black men were lynched by the thousands because of the lie that they raped and assaulted white women. In almost every lynching case that has been researched, the black victims were actually innocent—their only crime was daring not to conform to white people’s expectation for how African-Americans should be weak, submissive, and obedient to White America. Dozens—if not hundreds—of black American communities were destroyed by rampaging white mobs during the 19th and early 20th centuries. Lies and rumors about “black criminality,” “negro uprisings,” and “disrespect” were used to make the blood of these mobs boil with violent rage. Such deceptions have continued even in recent years.