Republicans pledge to reverse Obama’s Keystone decision, but they can’t halt the movement the pipeline unleashed 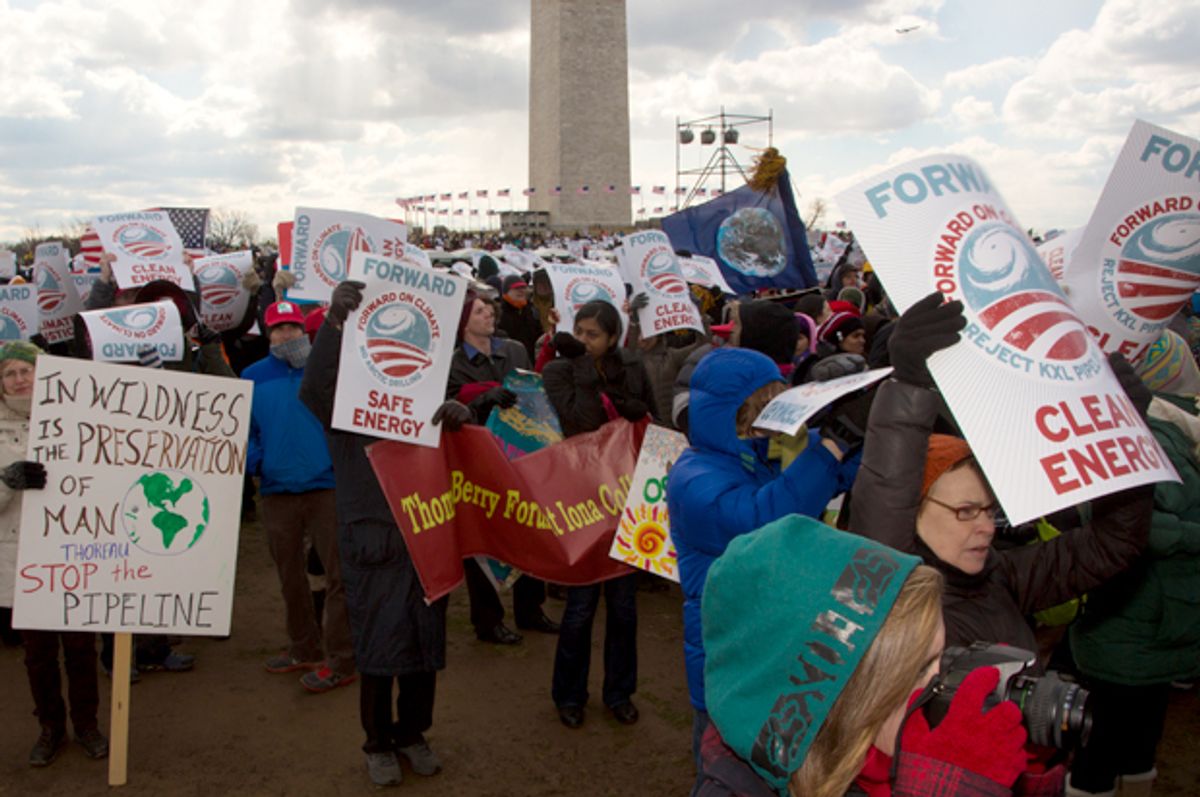 When President Obama announced Friday that he was finally rejecting the Keystone XL Pipeline, Republican presidential hopefuls swiftly tweeted their condemnation, accusing him of “bowing to radical environmentalists” and pledging to reverse his decision if elected. While the end of the oil industry project once called a “done deal” can certainly be attributed to grass-roots activism, that is only half the story. Even more important, the protracted fight against the world’s most famous pipeline actually turned tens of thousands of ordinary people into so-called radical environmentalists, recruiting and training us to commit civil disobedience and helping us to feel our power when working together.

I was one of the organizers of a civil disobedience action against the Keystone XL Pipeline that took place in Philadelphia in March 2014. When I heard Friday’s announcement, I remembered the solidarity I felt in the bowels of the Federal Building, where 29 of us were jailed, handcuffed behind our backs. One woman introduced a South African song that calls for courage, and we sang to each other by name, starting with the women and then singing down the block to the nearby men. By the time we were released that afternoon, I knew everyone’s names. I also knew that the experience had made me bolder, less afraid to stand up for what I believe, despite a fine and stiff wrists.

The protest was led by Earth Quaker Action Team, whose board I chair, even though our primary goal at the time was getting PNC Bank to stop financing mountaintop removal coal mining. We knew the extraction of Canada’s dirty tar sands oil was an outrageously destructive process, just like mountaintop removal, and that the pipeline was intended to make that oil marketable. After NASA climate scientist James Hansen warned that burning the tar sands oil would mean “game over” for the planet, several EQATers had joined 350.org founder Bill McKibben in civil disobedience against Keystone at the 2011 White House action that first threw the pipeline’s approval into question.

My own first experience of civil disobedience came in February 2013, when along with McKibben and 46 others, I was arrested in front of the White House in an action that included scientists, people of faith, civil rights icon Julian Bond, and the head of the Sierra Club, which had never before endorsed civil disobedience. A few days later, EQAT sent six buses to Washington, D.C., for the Forward on Climate Rally, which gathered 40,000 around the White House, the largest climate rally to date. A month later, CREDO asked people to pledge to commit civil disobedience if President Obama approved Keystone XL. Nearly 100,000 people signed the pledge.

Knowing that some of those folks had to be in our own backyard, EQAT volunteered to start training people in Philadelphia in preparation for the president’s ruling, which was expected within months. We invited representatives from two local groups, Be the Change and Rising Tide Philly, to join our action planning, deepening relationships with local allies. During six trainings, we brought together people who ranged in age from 17 to 80. A few had been activists since the civil rights movement. Most had never done anything like this before. There were Quakers and Jews, students and retirees, parents and grandparents, all united in a desire to do something that could actually make a difference and that would demonstrate the seriousness of our concern about climate change.

By March 2014, President Obama was still stalling, so EQAT went ahead and executed our action to show the administration that the pledge was not an idle threat. More local groups supported us, including 350 Philly, the Poor People’s Economic Human Rights Campaign, and individual members of the Sierra Club. On March 10, 200 people filled the plaza outside the Philadelphia Federal Building, which houses the local office of the State Department, an important player in the pipeline approval process. Singing, the 40 people willing to risk arrest blockaded three sets of doors. Over the course of the day, the police handcuffed 29 of us, giving up late in the afternoon when 80-year-old Rabbi Arthur Waskow slid under the police barricade on his back to join those still awaiting arrest.

Today, over a year and a half later, many of the people who were part of that action are leading local environmental justice efforts. EQAT—which won its PNC campaign last March—is now pushing to get southeastern Pennsylvania’s utility, PECO, to create local green jobs by making a dramatic shift to rooftop solar. Several Be the Change members are leaders in the parallel effort to keep Philadelphia from becoming a hub for dirty energy. We know each other better and show up to each other’s actions more than we might have because we risked arrest together and sang each other’s names in jail. On Sunday, at a celebration of the Keystone victory hosted by 350 Philly, we continued building relationships and a movement.

And that’s just in Philadelphia. The struggle against Keystone motivated Native Americans and ranchers to form the Cowboy Indian Alliance and brought Nebraska farmers and tree-sitters into common struggle along the pipeline’s path. Across North America, there were more than 750 No KXL vigils and protests, some of them including civil disobedience. Even if they never acted on it, thousands of people who signed the Pledge of Resistance received Rainforest Action Network’s training in civil disobedience, making that option just a little easier to consider the next time around.

Through all these efforts, ordinary people met others of like mind in their communities and realized they were not alone in feeling that it was time for “radical” action to stop the radically irresponsible plundering of the fossil fuel industry. Many attended the People’s Climate March in September of 2014 and felt the power of walking with 400,000 others in a movement that has been steadily broadening. Many read Friday’s announcement by President Obama and knew, with a deep quickening of hope, that they had been part of something that made a difference.

Republican presidential candidates can pledge all they want to reverse Obama’s decision on Keystone, but they can’t reverse the movement the pipeline unleashed.