Not these clowns again: From fading Jeb Bush to embattled Ben Carson, a preview of tonight's GOP debate

The GOP candidates will take the stage at the Milwaukee Theatre tonight. Here's what to expect 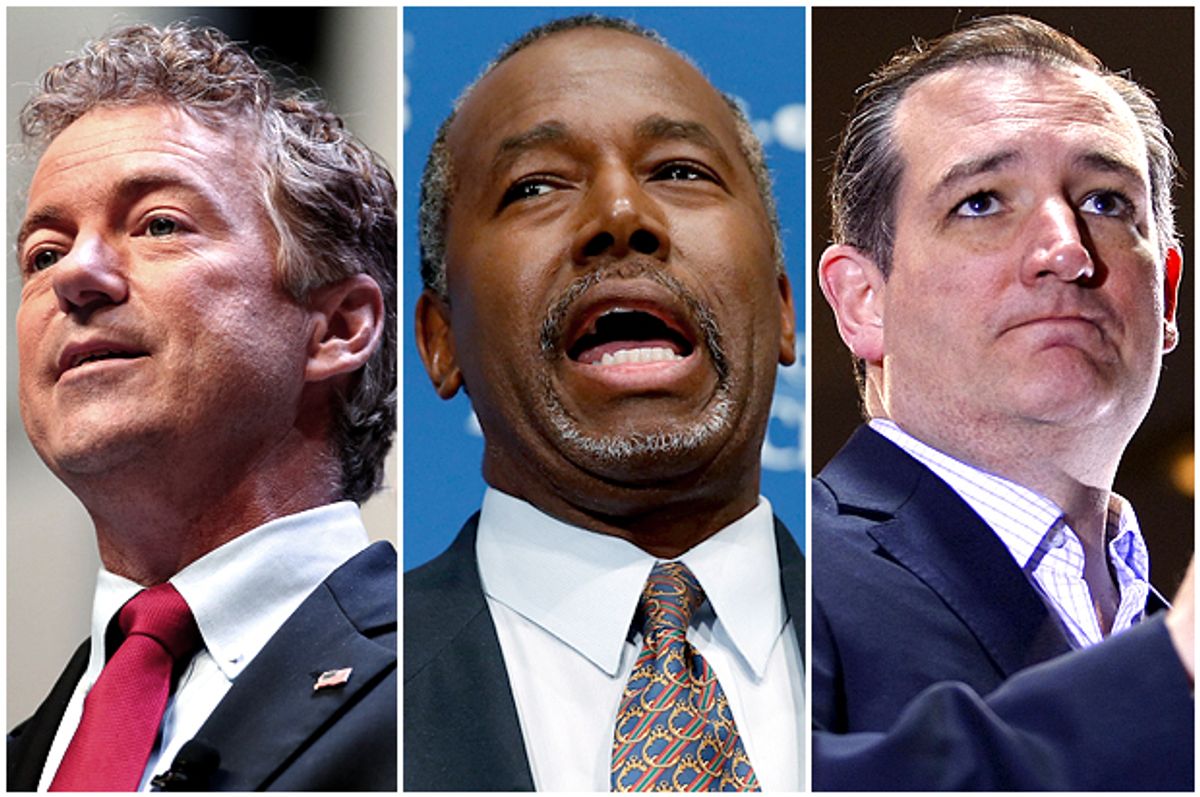 The fourth Republican presidential debate will be held tonight at the Milwaukee Theatre in Milwaukee, Wisconsin. The debate airs on Fox Business Network at 9 p.m. EST and will last a brisk two hours. Like the CNBC debate two weeks ago, the focus tonight will be the economy, specifically jobs and taxes. Despite all the hand-wringing from the GOP candidates about the format of previous debates, the Fox Business debate will proceed as originally planned. The big difference in this debate is the size of the field, which is noticeably smaller. Lindsey Graham and George Pataki have been eliminated from the junior varsity debate and Chris Christie and Mike Huckabee (because they failed to meet the 2.5 percent national polling average cutoff) have been booted from the varsity stage. That leaves eight candidates for the main event.

Here’s a brief candidate-by-candidate preview of what to expect tonight.

Trump, despite slipping in some of the national polls, is still the front-runner. Carson has taken the lead in Iowa, but Iowa is an evangelical hotbed and was never a likely win for someone like Trump.

Trump remains well-positioned in the other early primary states and there’s no reason to expect him to fade any time soon. I don’t imagine he will have much of a strategy tonight – strategy isn't really Trump's shtick. At no point in the previous debates has Trump offered anything like a coherent thought or a sound policy proposal. And that won’t change tonight. People like Trump because they like his pompous persona, not his ideas. He’s already emasculated Jeb, the early establishment favorite, so I expect him to take a few shots at Rubio, the new establishment favorite. Now that Ben Carson is challenging Trump in the national polls, Trump is likely to ratchet up his attacks on Carson as well. And this is good for Trump. He’s best when he’s on the offensive, not when he’s explaining things. The more time he spends hammering low-energy losers like Carson and Rubio, the less time he spends defending his boastful ignorance.

This will be a critical debate for Carson. His charming know-nothingism has served him well so far. Republican primary voters have rewarded his ignorance by catapulting him to the top of the polls. He’s uttered unspeakably stupid things about Nazis, global warming, evolution, women, slavery and Egyptian pyramids, but none of that has hurt him. But now that he’s a front-runner, he’s come under increased scrutiny. Suddenly Carson is on the defensive, and it’s not clear that he can handle it. Tonight he’ll be targeted by Trump, Rubio and others looking to capitalize on his misfortune. Carson’s nice guy routine worked better when he was an unserious outsider candidate, but now that he’s regarded as a legitimate threat, he’ll have to fend off attacks. If he stumbles tonight, his campaign might be in real trouble.

Rubio’s political stock is on the rise. Thanks in part to Jeb’s precipitous collapse, Rubio has emerged as the new establishment alternative to Bush. His goal tonight is to build on his momentum. If Rubio can’t solidify himself as the new “safe choice” for Republican insiders and donors, he risks becoming the latest flavor of the month candidate. At the last debate, Jeb tried and failed (as only Jeb can) to undercut Rubio by questioning his attendance record in the Senate. I expect Jeb to try something else tonight. I doubt it will work, but Rubio needs to be prepared for it in any case. Ted Cruz has also begun to position himself as the outsider alternative to Rubio, whom he’s pejoratively calling a “moderate.” It will be interesting to watch how Rubio handles this pressure from Cruz tonight.

Jeb is just about finished. He’s failed to win over the base and he’s floundered at every debate so far. It’s hard to see how Jeb gains any traction at this point. His donors are panicking publicly and many of them are already shifting their support to Rubio, who appears much more viable than Bush.

The truth is that Jeb is a weak candidate. He ran arrogantly on the assumption that his name and money would carry him to the nomination, but that’s not happening. Republican voters don’t like him and his political persona is ill-suited to the current climate. Jeb is trying to rebrand himself as a fixer, someone who lacks pizzaz but is capable of getting things done in Washington. Like everything else Jeb has done in this campaign, however, this message is perfectly tone deaf. The last thing the base wants right now is a pragmatist. I expect Jeb to peddle this theme tonight by contrasting himself with the inexperienced neophytes onstage, but it won’t work.

Cruz is as well-positioned any of the candidates right now. He has no chance of winning a general election, but he could easily win the Republican nomination. As I wrote yesterday, Cruz is playing the long game. His super PAC coffers are filled to the brim and he’s waiting, patiently, for Trump and Carson to fold. Assuming Trump and Carson collapse either before or at the Republican convention, Cruz is the logical alternative for their supporters, which is why he isn’t attacking them more aggressively. I expect Cruz to continue to dog whistle to religious and anti-government conservatives tonight, as these are his two main constituencies. Now that Huckabee is off the stage, moreover, there is one less theocrat to compete with Cruz, so he’ll likely take advantage of that as well.

Kasich has remained one of the more interesting candidates in the race. He’s a moderate Republican, by today’s standards, at least, and he’s said some reasonably sane things in previous debates. I applauded his courageous decision to side with Christ over Republican Christians in the first debate, for example, but Kasich’s compassionate conservatism isn’t resonating with Republican primary voters. Kasich is essentially tied with a fading Carly Fiorina at the moment, which tells you everything you need to know about his odds of winning this race. I doubt there’s much Kasich can do to change the dynamics of the race tonight, but I expect him to keep framing himself as an electable moderate. He’ll have to attack the front-runners, however, and so far he hasn’t been able to do that effectively.

Rand Paul doesn’t matter. He barely met the 2.5 percent polling cutoff for this debate and he probably has less reason to be on that stage than someone like Chris Christie, who’s been down in the polls but has a higher political ceiling than Paul. In any event, Paul will be there tonight and nothing he says will resonate. From the beginning, his only real constituency has been the libertarian wing of the party, but, for whatever reason, they just aren’t into him.

Like Rand Paul, Carly Fiorina doesn’t matter. After her inspiring, fact-free performance at the first debate, Fiorina became a contender, but that lasted all of a few weeks. Fiorina is currently hovering around 3 percent in the national polls and she appears to have no plan “B” now that she’s been outed by the fact-checkers.

Fiorina’s campaign has been pure performance art from the start. She’s only interesting as a case study in how far you can stretch the truth if you simply lie in the right tone. She’ll do well tonight in that she’ll say untrue things with remarkable confidence, but voters have clearly soured on her as a credible candidate.