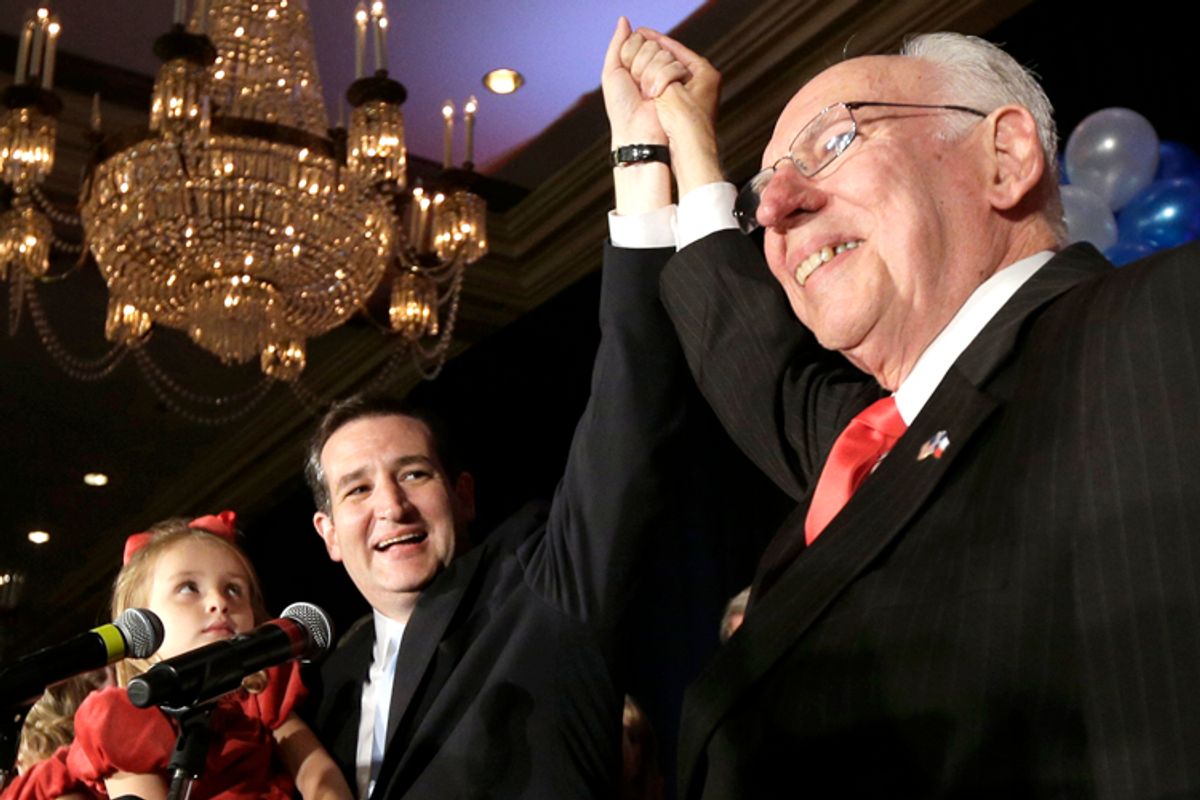 The elder Cruz, who joined his son this weekend for an extreme Christian evangelical conference in Iowa, has served as the Texas senator's most vocal supporter, crisscrossing the nation on a right-wing circuit that's part campaign stumping, part proselytizing. According to CBS News, while his son declared “any president who doesn’t begin everyday on his knees" as unfit "to be commander-in-chief,”  the elder Cruz encouraged the gathered evangelicals to push against "Christians being singled out" at this weekend's event.

"God didn't put Obama in power. We did! By sitting on our rear ends," the elder Cruz explained. "Make sure everyone understands that voting is our civic responsibility," he implored the audience in what has become his routine almost hourlong speech.

In fact, Cruz's right-wing shtick has grown so popular with the Christian right that this time in Iowa, as CBS noted, some in the audience even shrieked "Rafael for vice president!" as the popular Cruz patriarch walked off the the National Religious Liberties Conference stage.

Part of the elder Cruz's allure, like that of leading Republican presidential candidate Ben Carson's, is his narrative of religious redemption -- a story his son, Ted, often repeats on the campaign trail and features prominently in his memoir.

"You might as well kiss this country goodbye,” Cruz recently told a crowd, relying on his experience in conservative boogeyman Fidel Castro's Cuba to warn of impending doom with the election of Hillary Clinton.

But now, like has happened to Ben Carson, Rafael Cruz's account of past mischief as part of Fidel Castro's Cuban revolutionary army has come under increased scrutiny and according to a new New York Times report, much of Cruz's early narrative is "an embroidered one."

Instead of being the gun-toting rebel leader he often claims he was, "Cruz’s former comrades and friends" told the Times that he was just "a teenager who wrote on walls and marched in the streets":

Leonor Arestuche, 79, a student leader in the ’50s whom the Castro government later hired to verify the supposed exploits of revolutionary veterans, said a term existed for people like Mr. Cruz — “ojalateros,” or wishful thinkers. “People wishing and praying that Batista would fall,” she said, “but not doing much to act on it.”

But according to the Times, "País was killed seven months later and in a different place and manner."

Amazingly, like Carson, Cruz is shrugging off the media's discovery of apparent discrepancies in his past accounts:

Told that Mr. País had been executed the next year, in a different place, and that this had been amply documented, Rafael Cruz brushed off the mistake: “I don’t remember where País was killed,” he said.

Approached in Ohio, Mr. Cruz was asked to clarify the reason for his 1957 arrest. “I’ll have to think about it,” he said. “I don’t quite remember.” He offered to be interviewed again at an event that night, but instead had a reporter ejected from it.

The Times even tracked down Mario Martínez, Cruz's former revolutionary cell mate, and he told the paper that "he and Mr. Cruz had belonged to the youth brigade of Mr. Castro’s 26th of July Movement in their hometown, Matanzas, but had done little besides join in protest marches."

Ted Cruz's presidential campaign responded to the Times' report by slamming the paper, saying, "to repeat statements from communist officials in Castro's Cuba regarding events from nearly 60 years ago as truth is irresponsible reporting and simply has no basis in truth."