Bring on the outrage: Go ahead and hate on "coddled" college kids — just admit that anti-p.c. backlash is fueled by outrage, too 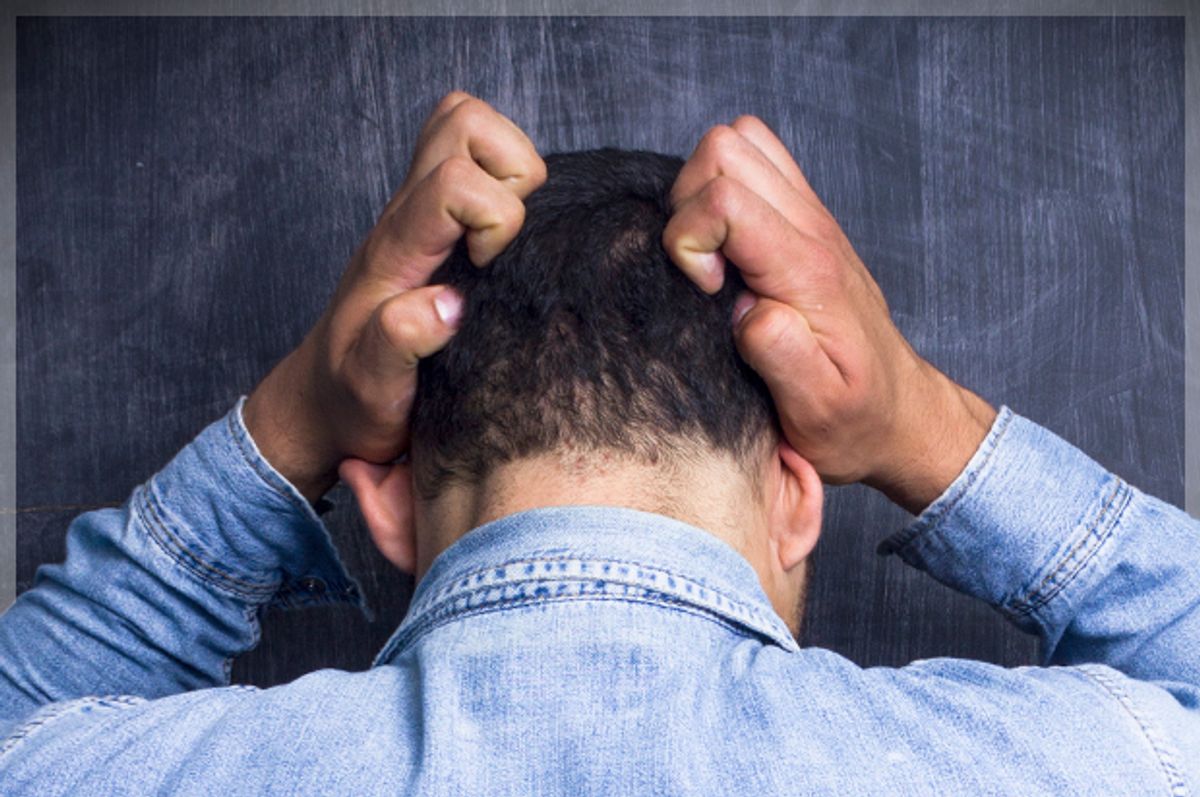 It always bothers me hearing about “outrage” as being in and of itself a societal ill and one that can be blamed on a certain group of people. Right now there’s a cottage industry around accusing young people, people on college campuses and/or people who use the Internet of becoming the “p.c. police,” living in an “echo chamber,” etc.

Outrage over outrage--meta-outrage, which itself apparently does not count as outrage--has become very popular, with two of the leading peddlers of meta-outrage, Jonathan Haidt and Greg Lukianoff, building their brand around the “Coddling of the American Mind.” Lukianoff, the president of the Foundation for Individual Rights in Education (FIRE)--the Jesse Jackson of the Rainbow Coalition of meta-outrage, if you will--has been going around college campuses expressing his full-throated outrage at students’ outrage, most recently coming to Yale University to make a big deal out of how the students made a big deal of racist Halloween costumes.

It’s always been convenient for people talking about “campus outrage” to zero in on incidents where the offense seems petty and the stakes low, such that we can all point and laugh at people upset by something as seemingly trivial as a white dude in a sombrero or an Op-Ed in a campus newspaper (who even reads campus newspapers anymore?) or whatnot.

Which is why it’s so inconvenient that the story about the University of Missouri system president resigning is happening at the same time. This time neither the issue nor the stakes are trivial--the racism isn’t ambiguous, it’s as blatant as a swastika of smeared shit on the wall. Students aren’t “whining” to the media--indeed, they’re trying to keep the media out as much as possible--but instead taking direct action, starting with a hunger strike and culminating in a strike of the football team, apparently the one pressure group Mizzou feels obligated to listen to.

There certainly are people who lump in the political protests going on at Mizzou with “outrage culture” and decry it as all part of the same societal malaise. These tend to be the people who don’t like left-wing political protesters in general and haven’t liked them since the 1960s and who make uneasy bedfellows for the concern-trolling liberals who claim they’re chiding campus activists for the good of the cause.

The concern-trolling liberals, therefore, have to carefully hedge, acting uncomfortable with the speed and finality of Tim Wolfe’s resignation but not outright disapproving of it. Straight-up defending the well-paid obstructive bureaucrat against attacks from students demanding widespread institutional change isn’t a good look for someone claiming to be an advocate on the left.

Meanwhile the right gets to double down on the idea that they’re defenders of “free speech” as a general, abstract principle, not just in terms of opposition to government censorship but claiming to be overall opposed to all forms of disproportionate “outrageous” responses to other people’s opinions that exert a “chilling effect” on expressing those opinions.

They repeat this incessantly, totally ignoring that everything they do that isn’t complaining about “outrage” is itself outrage.

Right now Quentin Tarantino is facing a boycott of his upcoming film "The Hateful Eight," not because of any content within the film itself but because he dared to attend a #BlackLivesMatter protest and express sympathy with the victims of police violence. The fear of having police unions turn against them en masse has kept most of Tarantino’s Hollywood peers from openly speaking out on his behalf. Police unions outraged by Tarantino have gone so far as to make creepy veiled threats of a “surprise” awaiting him beyond a boycott should he not apologize.

It’s a deep, deep vein of hypocrisy. Breitbart, the news outlet that puffed itself up as the vanguard of “cultural libertarians” who believe anyone should be free to say anything they want without fear of public shaming campaigns, launched a public shaming campaign against a random college student for a single tweet they found offensive to police officers. Along the way they’ve fed the Internet notoriety of “social justice warriors” who’ve vandalized their own property and blamed activists for it in order to defend the good name of cops.

We see it all over the place. The Republican candidates, supposedly standing against “political correctness” and “safe spaces,” react with outrage to being asked questions they didn’t anticipate by CNBC moderators and came out with a list of outraged demands for the next debate.

“Cultural libertarians” claiming to be waging war against “social justice warriors’” censoriousness spend the bulk of their time seeking the takedown of reviews of video games they disagree with and trying to get publications shut down for saying mean things about “gamers” and “nerds.”

It turns out that there is no side and, really, not even any prominent individual who is coherently and consistently anti-"outrage" and pro-"free speech.” In fact, someone who really did hold a position that could be described that way would not be arguing with anyone--they would be so chill with everyone else’s “free speech” they’d have no “outraged” response to it.

What’s really going on, of course, is an argument over what outrage is justified and what outrage is not. The word “outrage” isn’t actually related to the English word “rage”; it comes from the French outré, meaning something that crosses a line or violates a boundary. Our argument over “outrage” is our argument over where the boundaries are, and where they ought to be--and anyone who tells you they don’t have any lines that piss them off if you cross them is lying.

Take the recent debacle in Houston with the repeal of the Houston Equal Rights Ordinance, a referendum to protect the rights of LGBT people in general that foundered on being portrayed by opponents as the “bathroom ordinance” to let trans women into women’s restrooms.

People who mock the call for “safe spaces” as a sign of weakness and fragility generally seem to think that writing protections for trans people into law is part of the “safe space” cultural disease. But it’s very clear if you look at the rhetoric around opposition to HERO that this is backwards--the proponents of the law were advocating letting trans people do what they wanted bathroom-wise, and it was the opponents who were demanding a “safe space” from the danger they claimed cis people would face from having trans people in the “wrong” restroom.

Nobody sees themselves as the originator of outrage; everyone sees themselves as responding to an outrage, to the boundaries of morality or decency or safety being violated. There’s no neutral position that’s overall “anti-outrage.”

Ultimately the question becomes one of taking sides. Where do you think the boundaries are? Who do you think is being assaulted or violated in a given situation?

All these questions about “disproportionate outrage” beg the question of where the boundaries were. People who presume that a football team recruited to be among the only black students on a vastly-white-majority white-run campus should be chill about swastikas painted in feces and hecklers running onstage shouting racial slurs presume a great deal. People who presume that these reported incidents are the only incidents--and that they know better than students on the campus about whether these incidents are just the foam on the tide of a generally racist culture--are presuming even more.

Is it outrageous for Quentin Tarantino to use the word “murder” at a #BlackLivesMatter protest to describe police shootings? Only if you think that shooting a 12-year-old child in cold blood and subsequently denying responsibility for it was not in and of itself outrageous. Is it outrageous to pass a law saying people can’t kick trans people out of restrooms for being trans? Only if you don’t think there’s anything outrageous about living in fear of harassment, fines or violent assault because you’re not sure if the way you dress and act makes you “feminine” enough for the ladies’ room or “masculine” enough for the men’s room.

So yes, I support or oppose “outrage” based on whether I think the outrage is legitimate or not, i.e., based on my political views, and I find nothing to be ashamed of in this--and I find the concern trolls who claim to be against “outrage” in the abstract to be disingenuous. I hold the positions I do because both numbers and experience bear out that people who celebrate Christmas, police officers, people who play video games, and white straight men are doing relatively fine, whereas racial minorities targeted by police and trans people smeared as sexual predators and regularly murdered and driven to suicide are not.

You might disagree. You might live in a world where American Christianity is constantly under siege, where police officers are in far greater danger from civilians than civilians are from them, and where feminists in the gaming journalism are agents of DARPA attempting to subdue the US populace by turning games into a form of mind control. In that case, what looks to me like justified fighting for a noble cause looks to you like petty and deranged outrage--and vice versa.

You can’t get out of that by calls for more civility, for less outrage, for everyone to be nicer. You can’t order everyone to get back in bounds if we fundamentally disagree on where the boundaries lie.