George Will vs. Bill O'Reilly rages on: O'Reilly accuses Will of waging a "jihad" against him out of jealousy 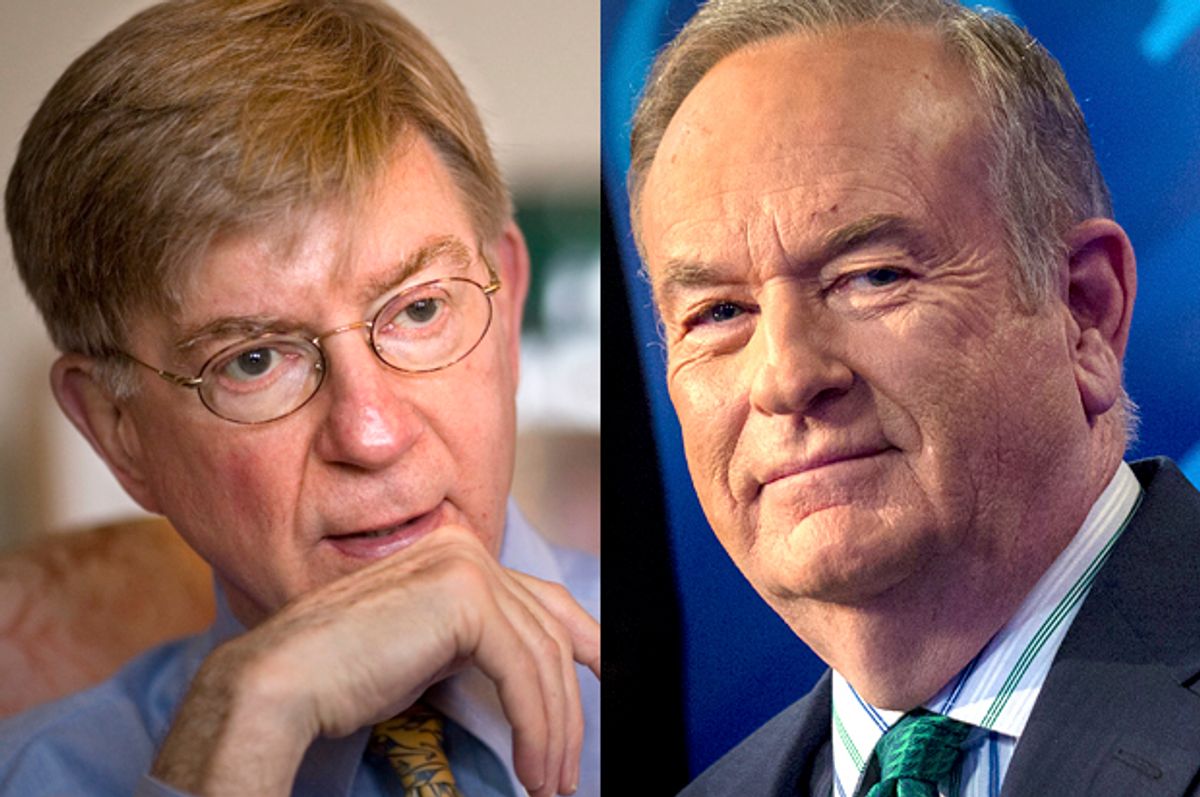 Accusations of jealousy and hypocrisy abound in the latest installment of this most laughable conservative reality TV show. Catch up on episodes 1, 2 and 3, but there is surely no need for a spoiler alert in this slow-moving Fox News melodrama.

Bill O'Reilly promised not to spend anymore airtime attacking George Will during the "O'Reilly Factor" last night, after the conservative Washington Post columnist released his second op-ed filleting O'Reilly's bestseller "Killing Reagan." But of course, O'Reilly first accused Will of waging a personal "jihad" against him out of jealousy. Fun times.

Opening his latest salvo in this war of attrition, Will began his second column by directly calling out O'Reilly as a know-nothing bloviator. "Were the lungs the seat of wisdom, Fox News host Bill O’Reilly would be wise, but they are not and he is not."

Will went on to accuse O'Reilly's sloppy historical account of fueling longtime efforts to discredit conservatism by undermining President Reagan’s competency in office:

O’Reilly impales himself on a contradiction: He says his book is “laudatory” about Reagan — and that it is being attacked by Reagan “guardians” and “loyalists.” How odd. Liberals, who have long recognized that to discredit conservatism they must devalue Reagan’s presidency, surely are delighted with O’Reilly’s assistance. The diaspora of Reagan administration alumni, and the conservative movement, now recognize O’Reilly as an opportunistic interloper.

While everyone else was watching last night's GOP presidential debate on sister network Fox Business Channel, O'Reilly took the chance to respond to Will's second take-down. And for the second night in a row, O'Reilly found his loyal viewers preoccupied with the ongoing feud. He responded to one such loyal fan from The Villages who complained that O'Reilly had gone "too far" in his on-air lashing of Will. "You should let the facts speak for themselves and write a rebuttal in the Washington Post," the viewer encouraged O'Reilly.

"Funny you should mention that," Bill-O began. "The Washington Post will not print the rebuttal written by me and Martin Dugard. Ron, they won't print it," the hosted explained.

"Even though the newspaper has run two op-eds and possibly will run a third, attacking 'Killing Reagan.' They won't let us reply."

Calling the Post's move "disgraceful," O'Reilly extended his attacks to the paper, calling it "unfair, unbalanced, and unworthy." O'Reilly assured his viewers that despite it not being printed in the Post, his rebuttal could be found on his website. O'Reilly then redirected his target back on Will and went off on this epic rant:

But you know what, George? I'm bored with it, I'm bored with it. So this is my last reply to you. Everything in Killing Reagan is true. Everything is documented. You, George, are jealous. You're jealous of our success on television and in publishing. Your last book was a huge bomb, George. A catastrophe in the sales department. Only 28,000 copies sold. I might be jealous, too, with that kind of resume. So I really don't blame you. But your elitist tone has never really been welcomed here in The Factor, as you know. And we believe that is a factor in your current jihad against us. As far as we're concerned George, where there's a Will, there's no way. End of story.

In his rebuttal to Will's second column, O'Reilly again accuses Will of being part of the "Reagan cabal," hellbent on nothing short of "deification" in historical accounts of 40th president:

Recently, the Washington Post published two columns attacking our book Killing Reagan.  We believe the hostile criticism is both misguided and disingenuous and is motivated by a small group of Reagan loyalists who are vehemently opposed to any objective look at the 40th President.

It should be noted that Killing Reagan is, on balance, a book that lauds the man but apparently that is not enough.  The Reagan cabal insists on deification.