Socialism is suddenly hot! The unions show signs of life! Is "class consciousness" coming to America at last? 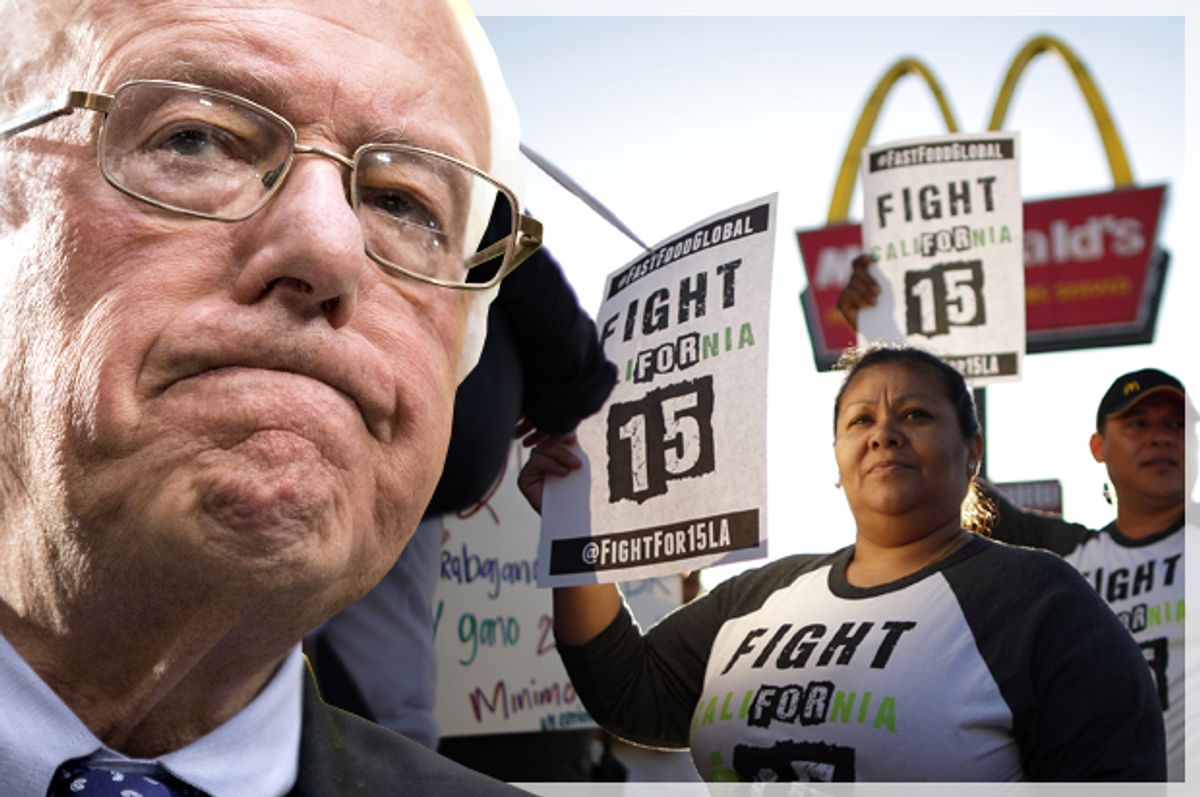 A specter is haunting America. Well, OK, not so much “haunting.” More like bugging America a little, disturbing our consumerist slumber from time to time. As specters go, it’s a spindly thing, nearly indiscernible, nowhere close to the Jacob Marley level of gruesomeness and clanking chains. At least not yet. It is, or it might be – let’s lean hard on might be -- the return of the most repressed and forbidden concepts in American political life: class consciousness and class struggle.

What lies behind the Bernie Sanders campaign and the unexpected comeback of socialism as a semi-viable political construct is arguably more interesting, and more important, than Sanders’ candidacy in itself. I’m not trying to douse you with the cold, salty water of political reality, Bernie-bros and Bernie-gals (and Bernie-others); despite the unpleasant gender-politics pissing matches, the Sanders campaign is almost entirely a good thing, and whatever discomfort it has caused Hillary Clinton and her fan base has been well worth it. But my point is that Bernie Sanders did not personally cause the Bernie Sanders moment. Conditions had to change on the ground, and in the collective consciousness, to make it possible in the first place.

Almost no one in the middle-aged and Reagan-scarred political commentariat, myself included, saw that coming, but it’s an immensely significant shift with unpredictable long-term consequences. Those altered conditions are both material and ideological, and in my judgment those things are inextricably connected. Worsening economic inequality and its pernicious effects have become unavoidable and nearly ubiquitous. Unless your family owns more than two houses and some of them are in Aspen or Palm Beach or the south of France, you have felt the consequences personally or seen them around you. Combine that with the emergence of a generation that has no memory of the Cold War or the self-inflicted traumas of the American left – a generation that has experienced little or none of capitalism’s alleged bounties, and has been launched into adulthood burdened with unsustainable debt -- and ideas or solutions formerly deemed unthinkable and unmentionable start to look pretty damn good.

Those new material conditions, which Karl Marx identified as a situation of “simplified class antagonisms,” when society increasingly splits “into two great hostile camps, into two great classes directly facing each other,” are galvanizing other phenomena as well, which at first may appear unrelated. On Tuesday, thousands of fast-food workers walked off the job at franchise restaurants in 270 American cities, in a one-day labor action organized by the Service Employees International Union to push its campaign for a $15 minimum wage onto the national radar as a 2016 election issue. While the union and the media have focused on the burger-flippers and chicken-fryers, the one-day strike also encompassed many other low-wage workers at nursing homes, childcare centers, FedEx depots and other service-sector employers.

Important questions have been raised on the activist left about the SEIU’s strategy and tactics. Journalist Arun Gupta (an occasional Salon contributor) has argued, for instance, that the union campaign is undemocratic and aimed more at P.R. impact than at creating meaningful social change. Nonetheless the mobilization of low-wage workers, both as a potential voting bloc and a class of 64 million people who have obvious common interests and little or no political representation, marks the labor movement’s most vibrant and impressive display of power in many years. Local governments in New York, Los Angeles, San Francisco, Seattle and several other cities have already raised the minimum wage well above the national level, and the issue marks a major dividing line between Democrats and Republicans. (Sanders supports the $15 wage while Hillary Clinton, in a classic display of Clintonism, says she favors $12. None of the leading Republicans want to raise it at all, although they've largely stopped talking about abolishing it altogether.)

On a much less significant scale – although it’s plenty important to me and my colleagues in the online media – there has been a recent union boomlet on the Internet, which for most of its existence has been a free-market Wild West environment dominated by Silicon Valley libertarianism. Over the past six months or so, employees at Gawker, Vice, the Guardian U.S. and Al Jazeera America have all voted to unionize, and an organizing campaign at the Huffington Post is reportedly nearing the finish line. (Somewhere in there, the writers and editors at Salon signed up with the Writers Guild of America and are currently negotiating a union contract. Or so I hear.)

Do these disparate stirrings of discontent and solidarity and political awakening among Taco Bell line workers and indebted college grads and underpaid Internet drones really add up to the grandiose label of “class consciousness”? Do they mean that we’re drawing near the moment when the owners of capital have pushed the systemic contradictions too far, and without meaning to have empowered an opposing class that will destroy them? Are we finally reaching the point (endlessly and tediously theorized in 20th-century Marxism) when a “genuine” or fully disillusioned version of class consciousness can come to grips with itself and its society, casting aside the alienation and reification that has led so many workers to identify with the cause of capitalism?

Oh, hell no. I am making no such argument. I’m saying this is an unexpected political moment, pregnant with all kinds of possibilities. But other people are clearly thinking about that. Why do you suppose the Koch brothers, the Dark Side puppeteers behind Citizens United and the deep-pockets funders of every Republican presidential candidate not named Trump or Carson, have started talking about economic inequality and corporate welfare -- as if they were actually bad things? Because Chuck and Dave are working out some wry, sardonic-but-true comedy act along the lines of King Lear’s Fool? Or maybe, just at a wild guess, because they are shrewd political operators who have consistently been two steps ahead of their opponents? And because they now perceive those issues as incredibly dangerous to their project of destroying democracy and instituting permanent oligarchic rule, and they want their minions in the Republican Party to defuse them somehow?

Please attend to what Charles de Ganahl Koch, the slightly more Vader-like of the Kansas bazillionaire brothers, said in August to a select audience of 450 Republican donors and political operatives, among whom were seated Jeb Bush, Ted Cruz, Carly Fiorina, Marco Rubio and Scott Walker (who had not yet been relegated to GOP unpersonhood). “We’re headed toward a two-tiered society, a society that’s destroying opportunities for the disadvantaged and creating welfare for the rich. Misguided policies are creating a permanent underclass, crippling our economy and corrupting the business community -- present company excepted, of course.”

That’s a pretty weak and nervous-sounding laugh line, isn’t it? I hope Lord Charles had his speechwriter promptly executed. Then again, I can’t imagine the whole speech was terribly comfortable for anyone present. Once we stop gasping at the sheer, outrageous balls-out temerity of that person talking about that stuff, we may notice that Koch did not say that sooner or later that “permanent underclass” was going to come tear down the castles of the rich with its bare hands and string them all up in the public square – or at least in the food court at the mall, right next to Sunglass Hut, since the public square was sold to developers long ago. That’s because he didn’t have to. I’m pretty sure they got the point.