The GOP's raging id won't ever go away: Why last night's debate only solidified Republican-primary extremism

Last night's tepid debate made one thing abundantly clear: The "outsiders" have changed this race for good 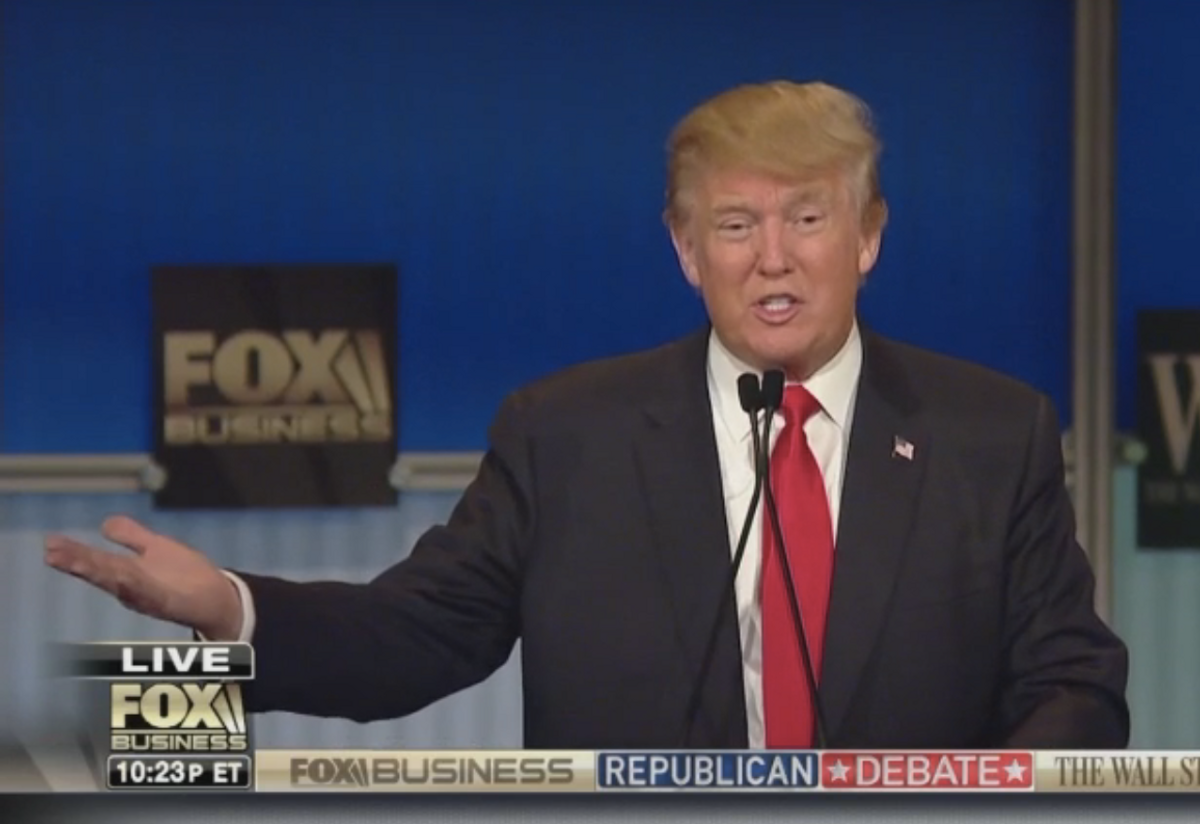 Last night, the Republican presidential candidates gathered in Milwaukee to talk ignorantly about the economy and scare the kids about the dystopian hellscape Hillary Clinton promises if she ever embeds her evil talons in 1600 Pennsylvania Avenue again. They argued amongst themselves, but mostly in civil fashion (with the exception of Trump who shushed Carly Fiorina for interrupting and got booed for it). The moderators were good little boys and girls throughout.

The kiddie debate was a little bit sad without Lindsey Graham to breathlessly remind us that terrorists are coming to kill us all in our beds, but Chris Christie and Mike Huckabee made up for it by providing Bobby Jindal with the chance to be Baby Ted Cruz and rail against them as big spending Governors who aren't real conservatives. Christie, for his part, indicated that he believes he is uniquely capable of taking on Hillary Clinton because he knows how to beat up on ... Democrats. In fact he seemed so obsessive about her that she might consider issuing a restraining order. (To paraphrase Joe Biden, every sentence was a noun, a verb and "Hillary Clinton.") And Rick Santorum opined that the government should do more to ensure that women get married, which was bracingly medieval.

The main event was a little more exciting, with John Kasich deciding that it was time to commit political suicide and officially become the Job Huntsman of 2016. Jeb Bush did his usual potted plant impression while Trump  and Carson vamped their way through the proceedings, as they usually do, thereby solidifying their frontrunner statuses once more. Fiorina and Paul were energetic and forceful -- and completely irrelevant.

If you combine the two debates you can easily see the divisions that plague the GOP. Christie, Huckabee, Kasich and Bush are all governors or former governors with pretty impressive records. Unfortunately for them, they are also politicians who remain wedded to reality, at least on some levels, and in today's Republican Party that makes them weak and vulnerable. Kasich decided to finally just let his freak flag fly and he showed himself as the curmudgeon he is by being as rude to the wing-nuts as they are to the party establishment.  They did not like it one bit. If Frank Luntz's focus group has any  validity (a big if, to be fair), Kasich was roundly loathed by just about every Republican watching the debate. (The focus group's main complaint was that he is a liberal.)

The other candidates are all running, to one degree or another, as outsiders and that status seems to allow them tremendous leeway with the facts. The jousting over the immigration issue showed this most starkly:

KASICH: Well, look, in 1986 Ronald Reagan basically said the people who were here, if they were law-abiding, could stay. But, what didn't happen is we didn't build the walls effectively and we didn't control the border. We need to. We need to control our border just like people have to control who goes in and out of their house. But if people think that we are going to ship 11 million people who are law-abiding, who are in this country, and somehow pick them up at their house and ship them out of Mexico -- to Mexico, think about the families. Think about the children. So, you know what the answer really is? If they have been law- abiding, they pay a penalty. They get to stay. We protect the wall. Anybody else comes over, they go back. But for the 11 million people, come on, folks. We all know you can't pick them up and ship them across, back across the border. It's a silly argument. It is not an adult argument. It makes no sense.

TRUMP: All I can say is, you're lucky in Ohio that you struck oil. That is for one thing. (LAUGHTER) Let me just tell you that Dwight Eisenhower, good president, great president, people liked him. "I like Ike," right? The expression. "I like Ike." Moved a 1.5 million illegal immigrants out of this country, moved them just beyond the border. They came back. Moved them again beyond the border, they came back. Didn't like it. Moved them way south. They never came back.  (LAUGHTER) Dwight Eisenhower. You don't get nicer. You don't get friendlier. They moved a 1.5 million out. We have no choice. We have no choice.

KASICH: In the state of Ohio, the state of Ohio, we have grown 347,000 jobs. Our unemployment is half of what it was. Our fracking industry, energy industry may have contributed 20,000, but if Mr. Trump understood that the real jobs come in the downstream, not in the upstream, but in the downstream. And that's where we're going to get our jobs. But Ohio is diversified. And little false little things, sir, they don't really work when it comes to the truth. So the fact is, all I'm suggesting, we can't ship 11 million people out of this country. Children would be terrified, and it will not work. (CROSSTALK)

That exchange perfectly illustrates the fundamental division among Republicans. On the one hand, you have some people speaking in fairly lucid terms about a problem and others engaging in absurd hyperbole. According to Luntz, the Kasich-Bush line on immigration was extremely unpopular, but the debate audience applauded both of them. (It's likely because debate audiences are often filled with party functionaries, aka "the establishment.") But of course, the talk-radio right will have none of it. Some might be persuaded to abandon Trump's deportation plan, but there is no room for a path to citizenship. The fact that Bush explicitly used that language following Trump's scrap with Kasich will almost certainly doom him (if he wasn't doomed already).

But on the insider-outsider question, the Rubio-and-Cruz show is where the real action is. They are both technically insiders, of course. They're U.S. Senators. But Cruz is a hardcore conservative warrior who can check every single box and then some. He led the charge to shut down the government and operates as a shadow Speaker for the Freedom Caucus. He takes pride in the fact that everyone in Washington hates him with a passion, especially establishment Republicans. Rubio has a vague Tea Party association and a winning youthful smile which the establishment types are hoping will be enough to make the right wingers eventually take a flyer with him despite his apostasies.

When they paired off on taxes, the two showed their different approaches. Cruz proposed a doctrinaire flat tax plan in which he claimed that everyone would get tax cuts and growth would be astronomical. This is the same economic mumbo jumbo they've been selling for years but Cruz has a certain evangelical zeal to his pitch that may sound fresher than most to the voters he's trying to reach. Rubio defended his plan for a child tax credit calling it a pro-family tax plan and when challenged by Rand Paul for not being a real conservative by creating a "new entitlement" (which is idiotic -- it's a tax credit) he grabbed on to "family values" and talked about the importance of being a parent. You can't say that isn't legitimately conservative even if it is too clever by half.

Rubio obviously hopes to hold on to a slight thin reed of mainstream political legitimacy in order to try to run successfully in a general election. But as with Romney before him, the primary is going to make it very difficult  to do that. Cruz, on the other hand, would not even make the attempt. He would run as the unabashed right-wing extremist he really is.

Assuming Trump and Carson don't make the final cut (and that's a big assumptions -- who knows where this is really going) and this race comes down to these two sons of Cuban immigrants, the choice before Republican voters will be whether they truly believe a dogmatic right wing conservative can win a majority. They always insist they do and then they trim their sails and accept another politician with what they see as ambiguous conservative principles. Will this be the year they decide to test it?

The debate probably didn't move the needle all that much. But each time this group comes together and exposes their views to the American public we get a clearer idea of just how fractured the Republican party is. This debate was more sober than the last one but they haven't pulled themselves together yet by any means.