"Empire" tries to harness the narrative power of sex, but rarely lets its characters enjoy the moment 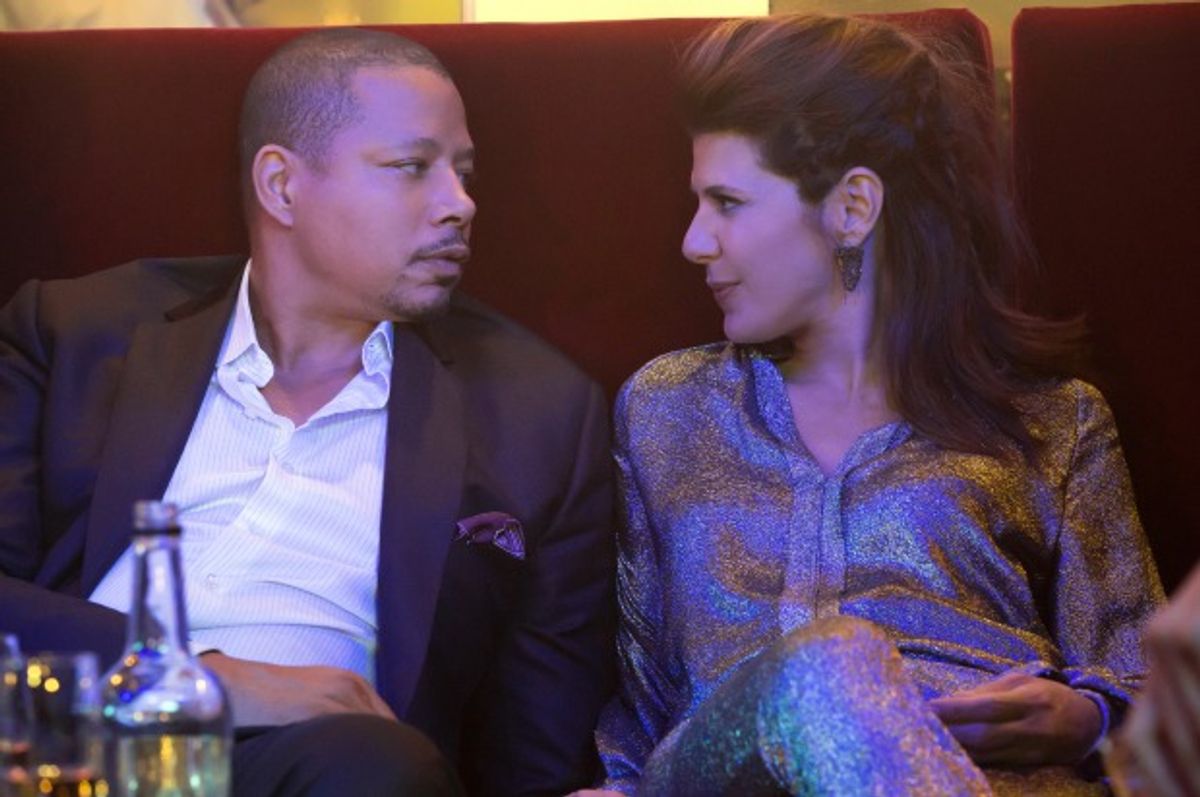 “Empire” is a show that features a lot of sex, but it’s not a show that is terribly sexy. Most of the time, the sex scenes are a bridge to another kind of storytelling—narratives of power, using the bedroom as just one more battleground in a war of attrition. In this scene, it’s an uncomfortable parable of moneyed power; Lucious and Mimi are business partners that are terrifyingly open to misuse of power. In the season premiere, Mimi allowed a woman to sleep with her in order to attempt to gain favor. Then she—turn of phrase intended—screwed her over anyway. That woman was Lucious’ ex-fiancee Anika (Grace Gealey). Lucious, who is fully aware of all that transpired, seems to take all of this as just another day of doing business. He also has a reputation for rapacious, predatory behavior—and we know Lucious, at least, to be a man capable of violence, in his quest to dominate every scenario. Right as the threesome is about to “start,” April shifts positions, beckoning Lucious and Mimi closer to her. Lucious looks almost annoyed that she would do something she wants to do. He moves her back to her previous position, and then pushes her legs apart. Then, distracted by her tattoo, he disappears for a songwriting spree, but the way he takes his leave is still chilling. He tells Mimi she should “go first.” This isn’t a threesome, this is a (consensual and possibly for-profit) gang-bang. Mimi, a ludicrous caricature of a lesbian, is cast in the “male” role; April, throughout her time on screen, does not speak at all. In a show that prides itself on female characters that do whatever they want, April is bizarrely marionette-like, lying on a hotel chaise lounge in her underwear.

This second season of “Empire” has been caught between the show’s ambitions and its failures to execute; as I wrote when it premiered, “Empire” is often torn between creating a spectacle and deriving some sense of meaning from that spectacle. This is particularly showcased in its sex scenes. So it’s not that “Empire” doesn’t know what it’s doing when it films a character in the bedroom. (Last week’s sex scene with the criminally underused Gabourey Sidibe existed only to allow her character to be sexual, and even though it was just as random as everything else, the show was conscious of the effect Sidibe’s scene would have.) It’s more that the show’s occasionally atrocious writing makes it difficult to see the occasional brilliance of its setups. Intimacy is a fraught battleground for all of these privileged characters; Jamal (Jussie Smollett) can’t trust any of his boyfriends, Anika only knows how to sleep her way to the top, and Hakeem (Bryshere Y. Gray) has a whole lot of not-so-subtle Freudian desires. Nearly every sexual pairing on the show has a sense of forced intimacy, but that’s almost the point.

After all, even the show’s best character can’t seem to get a truly hot scene. Henson carries “Empire” through its nadirs with sheer willpower and a bat of her false eyelashes, and that is more important than ever in the second season, which has pitched and yawed through every sort of confused storytelling choices. But this is nowhere more apparent than in bed, when Henson plays a woman who knows she is operating through a set of convenient masks. With her, it’s no surprise that Cookie’s two lovers that haven’t been her ex-husband Lucious have both been security personnel; she’s searching for a sense of safety that she will never feel again after 17 years in prison. But the problem is that none of her partners can really match her—either Cookie’s force of character or Henson’s skill in playing her. “True Love Never” starts with matriarch Cookie Lyon (Taraji P. Henson) in bed with a new paramour, Laz (Adam Rodriguez), and though it’s decadent, it’s about as unsexy as the threesome, albeit less illogical. The two are engaged in a power play that never quite bubbles over from fighting to flirting, and the two barely seem to connect to each other. Partly this is because Laz’s most dominant character trait, right now, is that he has a mysterious tattoo on his back—the outline of a longhorn’s skull, or a bull’s, or you know, some other kind of cattle. There isn’t a lot to get invested in there.

The tattoos — April's gun and Laz's bull — reveal an odd storytelling crutch. Both sex scenes in “True Love Never” pivot around an image engraved upon the body, an image that is supposed to have some kind of grander significance. The image is on top of a situation that is already charged, and takes the viewer—both audience and the character that views it—out of the moment. The implication seems to be that the bodies cannot have significance themselves, so they must be over-emphasized, with another image on top of the image. It’s a very messy layering, so embellished as to be baroque. It’s no wonder nothing on “Empire” ever feels sexy; eroticism might be rooted in complex emotions, but in its consummation, it’s a pretty basic act. “Empire” is throwing everything at the wall this season, and it might have better results if it would let its characters breathe a little, and maybe enjoy the moment just a little bit.