Republicans must hate the middle class: The most startling revelation of the GOP debate 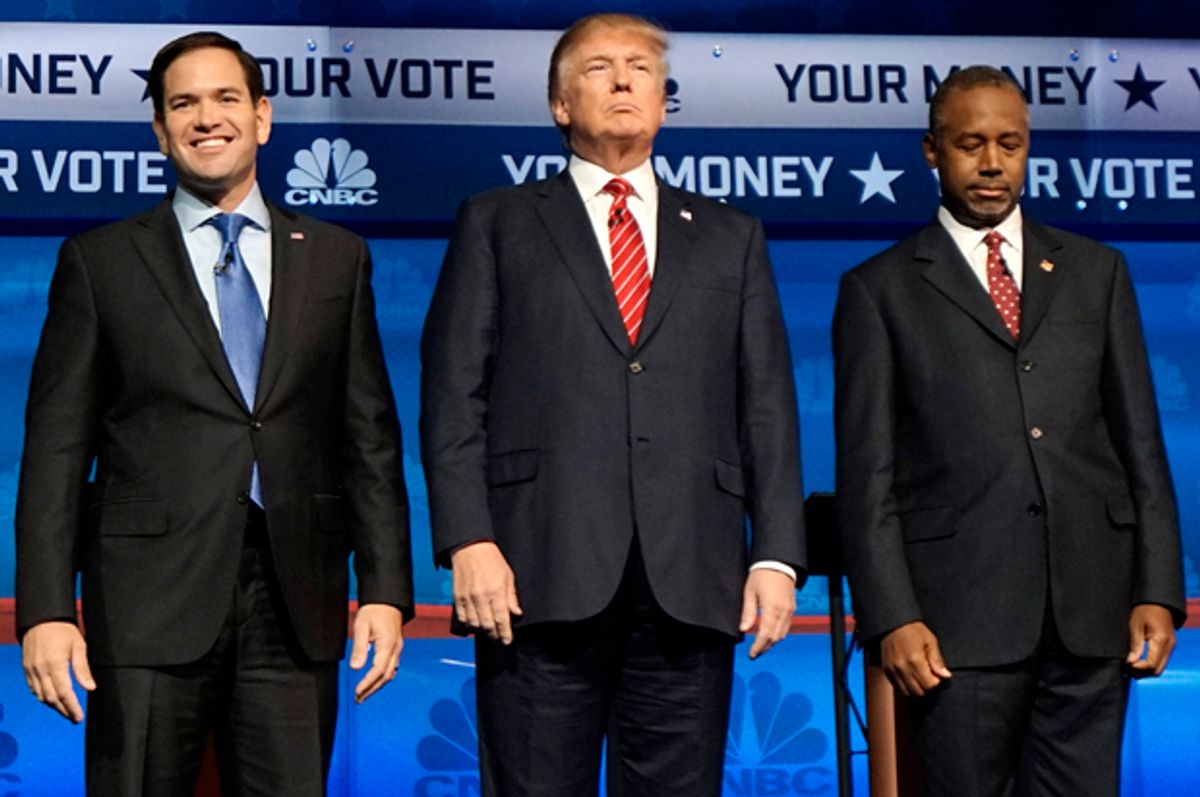 Beyond candidate eccentricities, weird mangling of facts and a desire to appear the toughest, the fourth 2016 Republican presidential debate yet again underscored that when it comes to economics, the GOP’s agenda is to please U.S. business owners and corporations and let the rest of America pick up the crumbs.

From the opening question on raising the minimum age to $15 hour, when Donald Trump replied he “can’t be sympathetic,” Dr. Ben Carson said that raising it would make “joblessness increase” among black youths and Marco Rubio said that raising it “will make people more expensive [to employ] than a machine,” not a single GOP candidate said what America’s business community could do to help average Americans.

The closest might have been Ohio governor John Kasich’s declaration that Wall Street greed needed to be reined in. But clearly for the entire GOP field, the top impediment to economic growth was paying taxes and following government regulations.

When pressed for details of their economic plans, the GOP hopefuls largely rolled out the longtime and predictable Republican ideals of freezing all non-discretionary federal spending — social safety nets, education, environment, science and technology — but increasing the military budget because America is losing its global dominance.

Various candidates seemed to vie for the longest list of federal departments they planned to close as a consequence of their tax cut plans — the Department of Education, Department of Commerce, Department of Energy, Department of Housing, Community Affairs and of course, the Internal Revenue Service, to start.

All said that their plans to cut federal taxes for individuals and for businesses, and ending almost all exemptions except for home mortgage deductions, would lead to an explosion of growth. They sais that’s because the nation’s now-stymied entrepreneurs would have the money to start businesses and average Americans would have several thousand more dollars annually to spend.

In sum, this was a rehash of the trickle-down theory of economic prosperity that was popularized by Ronald Reagan in the 1980s, when his tax cuts greatly expanded the federal debt — a historical fact not mentioned on the GOP debate stage Tuesday night. If America’s recent economic history has shown anything since Reagan’s time, it is that federal handouts to business owners and corporations have increased working and middle-class people prosperity.

On other important issues, the GOP candidates clashed over whether it was possible to deport 11 million undocumented migrants. Donald Trump praised the nearly forgotten but shameful 1950s project of President Dwight Eisenhower, which rounded up and released 1.5 million migrants in the desert south of the Mexican border, as evidence it could be done. Jeb Bush and Kasich said Trump’s approach was wrong, naive and cruel, instead saying that migrants should pay fines and get on a slow but steady path to citizenship. Ted Cruz predictably replied, “If Republicans join Democrats as the party of amnesty, we will lose.”

The rest of the debate was filled with bragging rights for the leanest tax cut plan, pledges to downsize government, promises to repeal and replace Obamacare and other federal regulations (such as the Dodd-Frank law governing the financial insititutions that caused the 2008 global recession), and divides over how the U.S. should fight ISIS. Everyone wanted a stronger and more aggressive overseas military presence, competing to be the most threatening commander-in-chief to enemies abroad.

It’s hard to pick winners and losers in these debates, because Americans are seeing each candidate up close and unfiltered and are able to judge them before the airwaves are filled with their paid political ads, which attempt to hide their now obvious quirks and flaws.

Trump appeared uninformed at times, and even attacked Carly Fiorina for interrupting people on stage, which is more than ironic if anyone watched how he behaved during past debates. Carson seemed a bit out of his league, espousing free market bromides, such as saying the nation became an economic powerhouse in the century after its founding in 1776 because it “had an entrepreneurial attitude.” Perhaps he does not recall that for the first 89 of those years, until the Civil War ended, slavery powered much of the American economy.

Bush and Kasich tried to project that they realistically knew what a president would and could do, in contrast to the more outsized and rhetorical pledges of their competitors on stage. In other words, they were vying to be the GOP business establishment’s candidate of choice. Rubio, in contrast, sprouted somewhat clichéd answers that pandered to the same anti-regulation wing in the party, but sounded less seasoned and somewhat patronizing. Fiorina showed she could be ruthless and unsparingly critical, boasting that Hillary Clinton wouldn’t stand a chance running against her in the general election.

But horse race and gossipy predictions aside, the bottom line for this GOP debate on economics is that not one candidate looked at corporate America and posed John F. Kennedy’s famous question, “Ask not what your country could do for you, but what you can do for your country.” Instead, they were all vying to be corporate America’s tax-cutter and deregulator-in-chief. As for the rest of the country’s fortunes, they said the benefits will pour down once they take care of the already rich and powerful.