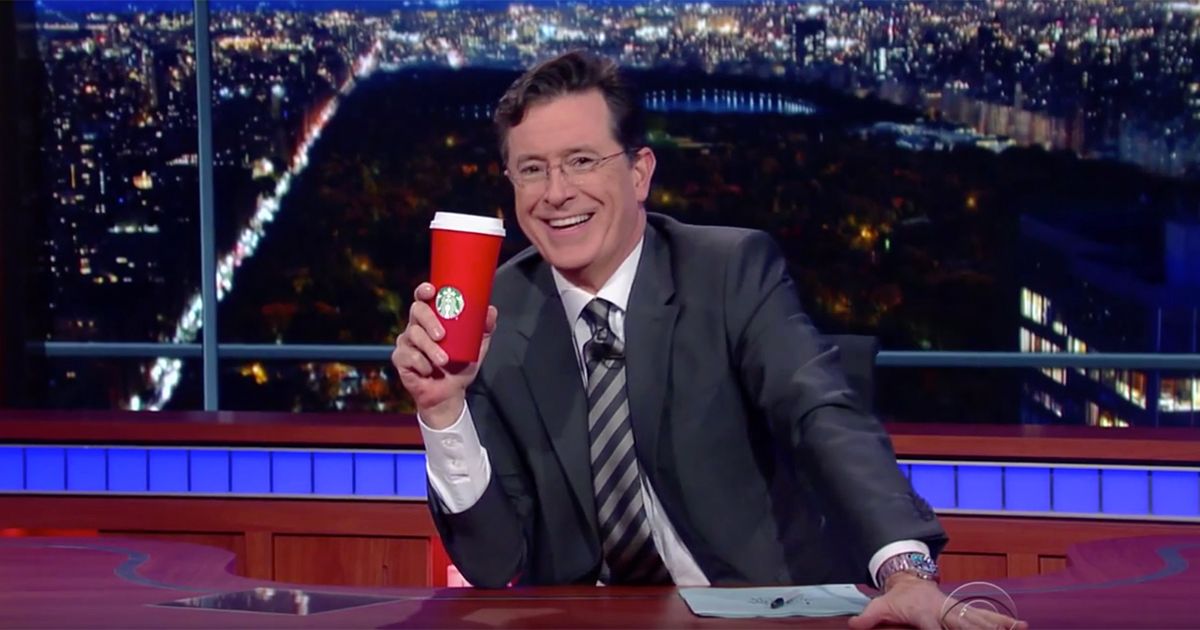 The weather is changing, the cool breeze of Jack Frost is on the horizon, airline travel is beginning to be strategically jacked-up, so that can only mean one thing! "We're about to enter the magical season of getting angry that there's not enough talk about Christmas," Stephen Colbert said on Wednesday's "Late Show."

The first victim this season was Starbucks who had the temerity to change their cups red without indicating that it had anything to do with Jesus. Tragic really because everyone knows that Jesus loves a double-shot soy peppermint mocha with extra whip. It's in The Bible, folks, because it's the true meaning of the season. Even Donald Trump is defying the Lord's brew by suggesting people should boycott, leaving Americans to fend for themselves this holiday season with more traditional holiday beverages like bourbon.

"Yes, they got rid of the Christian religious symbols like snowflakes and snowmen," Colbert said. "I mean, I think we all remember the story of when Baby Jesus was visited by the Three Wise Frosties." He said that most of the outraged are ignoring the Christmas Blend coffee, Christmas cookies, the advent calendars, Christmas tree ornaments and that the whole red and green cup is pretty a Christmas-y thing. Shocking, really. To think people are speaking before they have the facts.

No one, including Colbert, is impressed with the religious-right's plan to "hurt" Starbucks by flooding the store to buy a beverage and tricking baristas writing "Merry Christmas" on the cups. Newsflash, Jesus doesn't care what's written on your Starbucks cup. Colbert has another idea of a way to "give customers a cup so full of Christmas, they'll be picking tinsel out of their yule log for months." That apparently looks something like this: Let's just agree to name this a venti Jesus Latte. It's one part gingerbread (for the body of Christ) with soy because everyone knows the Holy Ghost is lactose intolerant.