America loves a single dad: When was the last time a single mom became a viral hero just for raising her kids?

Richard Johnson's heartfelt message was met with cheers, while single mothers just get scorn from the right 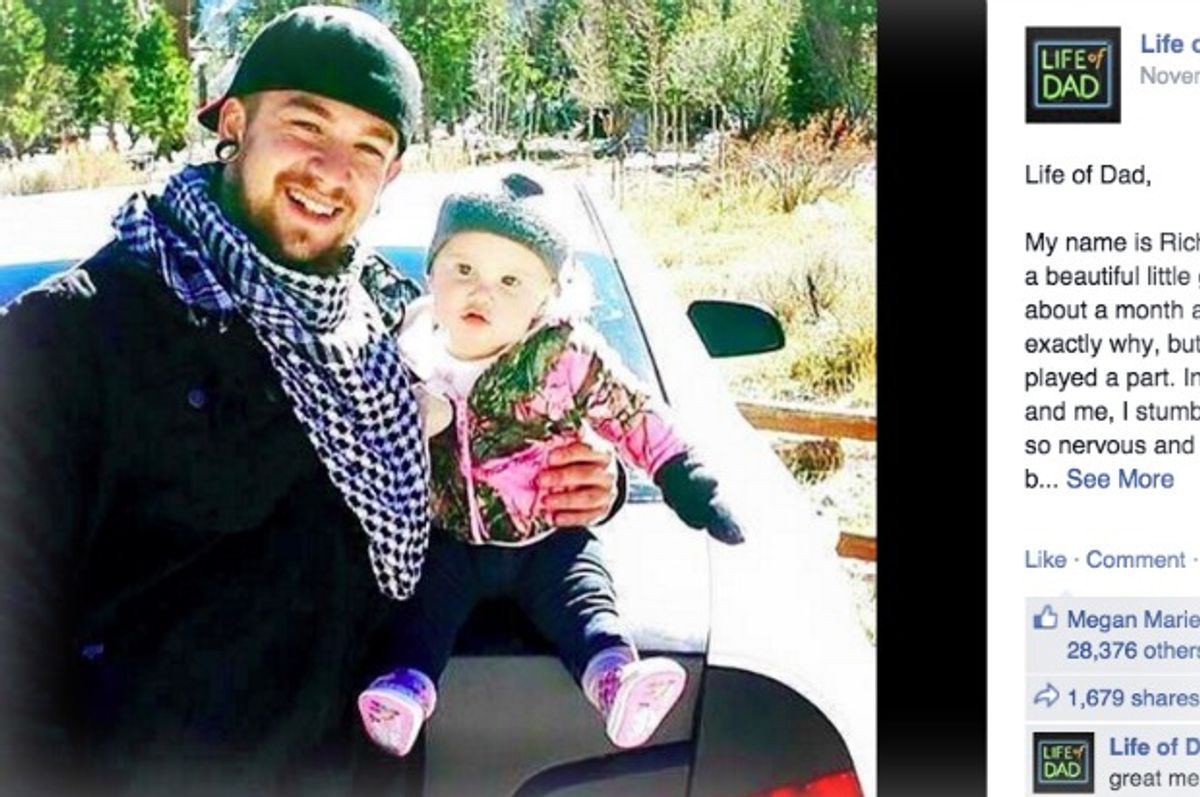 From the looks of it, Richard Johnson's baby daughter Persephone is a lucky kid. Even though Johnson says the girl's mother left just a month after she was born, the child appears to have a devoted, caring father. But as a loving dad becomes the viral hero of the week, how about we throw a little of the same support toward single moms?

In a Tuesday post on Facebook's Life of Dad, Johnson shared a photo of himself, smiling with his daughter, and expressed gratitude for the community he's found. "You truly helped my daughter and me through a very difficult time," he wrote. "We're both very happy now and continue to grow together everyday. She's now 10 months, and I now get asked by my friends for parenting advice constantly. We've come a long way, my daughter and me, and we definitely owe part of that to this page and the people within it."

Johnson says he doesn't know why Persephone's mother left, but that "We suspect postpartum depression played a part," and that in his early days of parenting without a partner "I was so nervous and scared about being a father in general, but now I was a single father and had to fulfill two roles. I wasn't sure I could do it. I had read every 'new parent' book I could find and clocked in over 1000 hours in YouTube videos from everything to braiding hair and painting nails to theories on how to deal with common parental issues."

For his candor and humility, Johnson has received a tremendous outpouring of solidarity and praise, from both other hardworking single fathers who got that way from both broken relationships and premature deaths, and from grown children of single fathers proud of the job their dads did. The replies on the Life of Dad page are almost uniformly touching and kind — and Johnson himself came back in on Wednesday with an uplifting follow up message. He stated firmly that Persephone's mother "is an amazing woman and I will have to ask the few people who had negative things to say about her to please refrain from doing so. No matter what she is the mother of my child and I only wish the absolute best for her."

He also shared that "I come from a family of divorce and was raise by a single mother. When my father left when I was 6 I didn't know I wouldn't see or hear from him again until I was 21." And he spoke not just to dads when he said, "For any single parents out there, if you ever feel like the load is to much or you're just not good enough. Look into your amazing child's eyes and just tell them you love them." His message is compassionate and inclusive. Learn from it.

The media attention Johnson has garnered for it has been wildly enthusiastic. Cosmopolitan gushed that "This Single Dad's Facebook Post About His Fear of Failure Will Absolutely Destroy You," saying, "It's refreshing to see a dude throw it all out there and be a caring human." "Today" reported that "A young single dad who poured his heart out in two Facebook posts about his struggles to raise an infant daughter by himself is resonating with fellow fathers on a social network for dads."

Speaking with ABC News, Life of Dad co-founder David Guest said, "To get an individual story from Richard about how he's doing in his life makes us feel like we are doing something good out there. There's been a great response from dads in our community to their story."

That's all terrific and encouraging. But as a just a data point, let's remember that as the number of single parent households in America continues to rise, over 80 percent of them are headed by women — women who, by the way, tend to earn significantly less than their male counterparts.

As the Washington Post reported last year, "Single motherhood has grown so common in America that demographers now believe half of all children will live with a single mom at some point before the age of 18." The reasons children wind up raised by single mothers are numerous — conscious choice, breakups, death, straightforward abandonment. The challenges of raising a child alone are tremendous for anybody doing it, yet you don't see a whole lot of viral posts using the word "hero" repeatedly to describe mothers. Quite the opposite. Conservatives luuuuuve to demonize them.

Rick Santorum has argued that "What we have is moms raising children in single-parent households simply breeding more criminals." Mike Huckabee believes that "Most single moms are very poor, under-educated, can’t get a job, and if it weren’t for government assistance, their kids would be starving to death."

Last year, Republican Jeff Bell sneered that "Single mothers particularly are automatically Democratic because of the benefits." Single mothers risk losing their jobs simply for being unmarried. Concern troll articles, meanwhile, note that "Lack of a two-parent household, in which it is typically the father who is absent, combined with the emotional stress by the mother, who has to fill both roles, contribute to the incidence of childhood depression."

So imagine if we extended the same the awe and respect for mothers raising their children alone that we do to guys like Johnson. Imagine if we supported families of all different configurations, and applauded the hard work of both men and women who show up for their kids every day. Imagine how great that would be, not just for parents raising their children right now, but for potential future fathers and mothers in our country. Just like Persephone.