Brooks Ayers' disgusting cancer lie: Even for a "Real Housewives" arc, this drama didn't add up

Ayers admits he faked proof of treatment—if he made up the cancer altogether, he wouldn't be the first 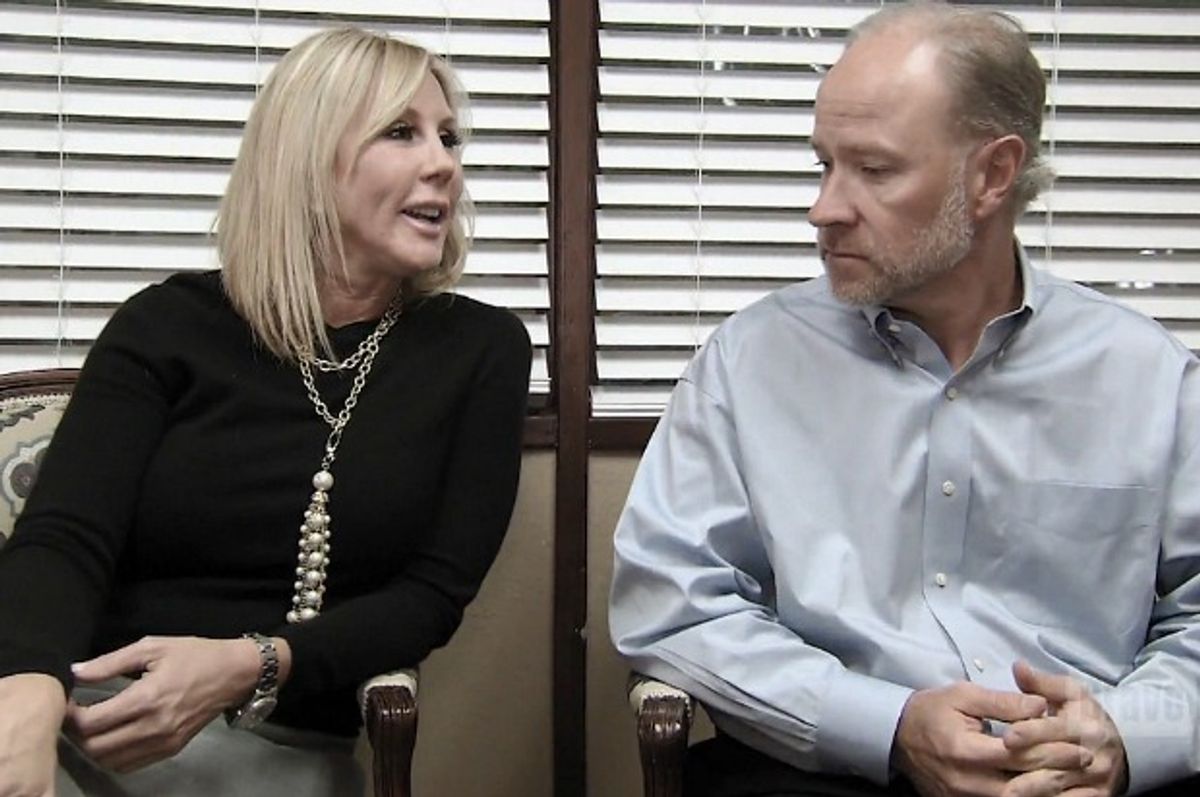 Brooks Ayers says, "I made a mistake, yet I have learned a huge lesson as well." That's nice for him, and I truly hope he has. But most of us don't need to learn the lesson not to fake having cancer.

I confess that I am the sort of the person for whom the phrase "Vicki Gunvalson's ex-boyfriend" means nothing. But after the "Real Housewives of Orange County" supporting player raised eyebrows over the past season over a does-he-or-doesn't-he drama over his claims that he was being treated for a deadly form of the disease, I took an interest.

Just last month, Ayers told Radar that he "Life is funny sometimes. Sometimes it is not. My reality is that I have, once again, been diagnosed with a form of Non-Hodgkin lymphoma specifically diffuse large B cell lymphoma" -- a "fast-growing, aggressive" form of the disease. He insisted, "Let me assure you that I am going to remain positive and continue to battle this disease vigorously with much tenacity along with seeking the appropriate medical care."

In a recent interview with E! he said he was "improving," and that he "went from Stage 3 initial diagnosis now down to Stage 2, I have no more inflammation, lesions in my lymphatic system. Just had some bloodwork numbers that need to come down, normalize." He said, "The latter part of January was my last round of chemo." And he's also said, "Unfortunately, I wish it wasn't true. It would be a lot easier if I didn't have cancer just to be honest with you. The daily grind, the routines of reminding yourself that I'm sick and I need to do certain things and not do certain things." Ayers also offered documentation that appeared to prove that he had been receiving treatment at City of Hope National Medical Center, and said, "These are the three bills that reference the days I got my treatment."

But Ayers' story still didn't quite add up. While patients can be successfully treated, cancer staging itself generally is downgraded, as he claimed he'd been. That's not how the terminology tends to work. And the paperwork Ayers claimed came from City of Hope didn't resemble the facility's official documentation. On Tuesday, a representative for City of Hope told E! that that they had not treated anyone named David Brooks Ayers.

And then it all came out. On Wednesday, Ayers released a statement admitting he had faked the treatment documents: "Words cannot express the deep regret that I have in fabricating documents to 'prove' to the world that I, in fact, have cancer. What I did was wrong and inexcusable. I acted alone, without Vicki's knowledge, to produce documents for a reality TV show in hopes of putting doubts about my cancer to rest. I never intended to disclose my actual medical records or details about my private and personal medical history, thus the rationalization of presenting documents that weren't true simply for a 'storyline' for the show."

The confession continues: "From this day forward, my own personal journey with this disease will remain private as I initially intended over a year ago. My sincerest apologies to my family, friends, loved ones, and those who are battling this horrid disease for any additional pain and/or stress that I have caused. As [University of Louisville basketball coach] Rick Pitino once said, 'Mistakes can be good. They are fertilizer. Everything I've learned about coaching [life], I've learned from making mistakes.' I made a mistake yet I have learned a huge lesson as well."

So apparently he did it for the "storyline." Well, that's a new one. It's unclear whether or not Ayers has ever been diagnosed with cancer at all, or has been treated for any disease. He says his "journey with this disease will remain private," and that could mean anything, up to and including a fake journey that never existed at all.

Earlier this year, Australian lifestyle Belle Gibson admitted that her claim the she'd survived a "terminal cancer" diagnosis were untrue — after she'd successfully parlayed her image as a cancer survivor into an app, a (swiftly shelved) cookbook and a whole lot of fundraising for "charity." Though she admitted, "None of it's true," she couldn't quite call herself a liar either, saying, "I think my life has just got so many complexities around it and within it." Over the past few years, we've seen a barrage of cancer charlatans fake illness for the straightforward excuse of making money. And in 2011, the Guardian reported on what it called Münchausen by Internet — "a growing number of people who pretend to suffer illness and trauma to get sympathy from online support groups."

I've had serious cancer, twice. I've lost some of the people I loved best in the world to cancer. And few things in the world confound and enrage me more than stories about people who fake cancer. Granted, I don't understand why people do crazy, deceitful, hurtful things in general, but you've got to have a special kind of cold bloodedness to toy around with something that is a truly traumatic experience. You've got to really not give a damn about those who've lived and died with it, not care about how much you're insulting other people's suffering. And while guys like Ayers may be fortunate enough to not have cancer, I have to pity them. Because they've got to be really sick.