"I’m sure it scares the living sh*t out of them": Why the protests at the University of Missouri may have the NCAA terrified 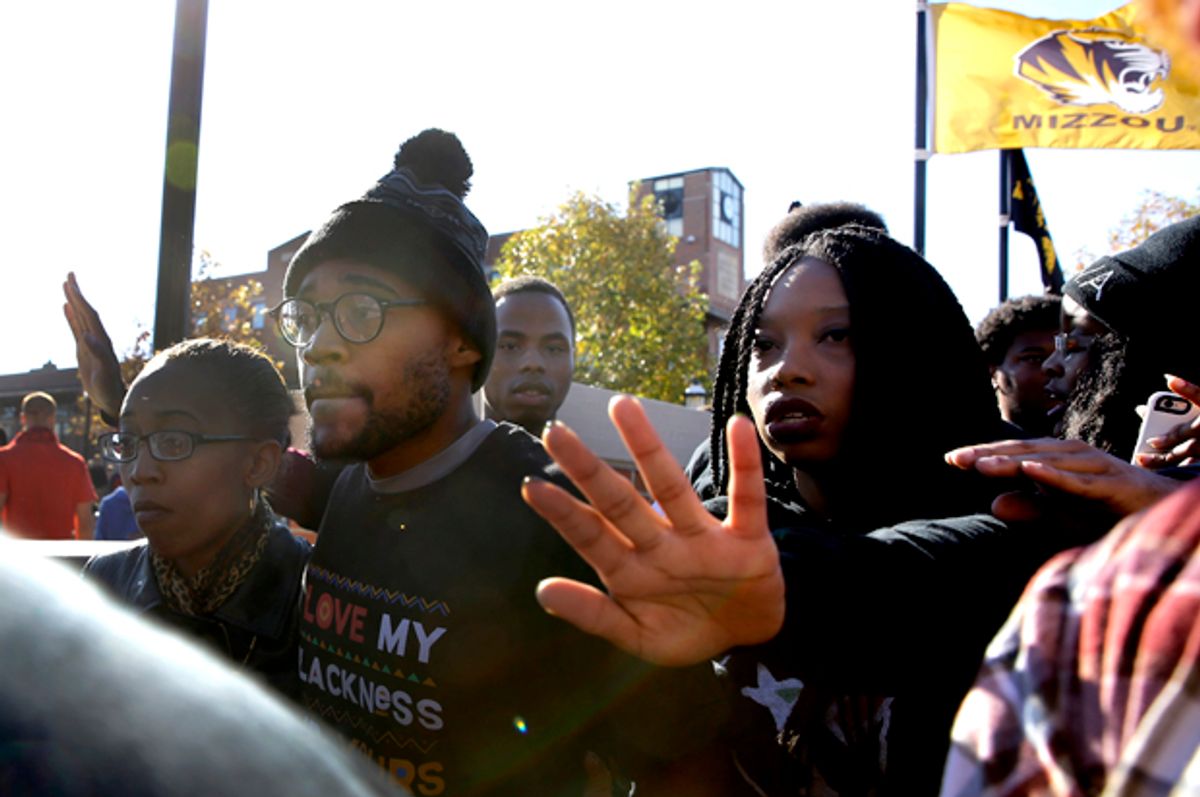 Earlier this week, after a series of escalating protests from students at the University of Missouri (Mizzou) culminated in the football team's vow to strike, Tim Wolfe, the school system's president, resigned. And almost immediately thereafter, R. Bowen Loftin, the chancellor for Mizzou's Columbia campus, promised to soon resign as well. To see athletes at a prestigious program like Mizzou threaten to withhold their labor for political reasons was remarkable; but to see their threat so rapidly produce such enormous results was nothing short of extraordinary.

Yet because events within the school system transpired so quickly, it could be difficult to keep up. So Salon decided to reach out to one of our favorite sources for understanding the relationship between politics and sports, Dave Zirin, sports editor for the Nation and the author of "Brazil's Dance with the Devil: The World Cup, the Olympics, and the Struggle for Democracy," who has been following the story closely. We spoke over the phone a few days ago about the protests, their context and what comes next for the school, its athletes and the NCAA. Our conversation is below and has been edited for clarity and length.

In terms of explaining what's happening on the Mizzou campus right now, when do you think we should begin the story? Because that's often a point of contention, here, with protesters arguing the blow-up was a long time coming; and with their critics opting instead for a narrative that makes the students' outcry seem disproportionate.

It predates Tim Wolfe by years, if not decades.

The more I read about this, the more I read accounts from students — who aren’t just recent graduates but are in their 30s and 40s — [I see] clearly there is an issue on this campus of unaddressed racism, unaddressed sexism and unaddressed homophobia. And by "unaddressed," I mean that incidents always happen at an alarming and almost metronomic regularity, and the response of the administration has been to shrug their shoulders, and say, “Well, you deal with it!”

Given that there was already frustration to begin with, couple that with the fact that Ferguson took place just two hours away from the Columbia campus, and the administration didn’t do anything; couple that with the fact that this president, Tim Wolfe, has no experience in higher ed; he comes from a tech background; his plan was to run university like a business; he slashed programs; he slashed healthcare for grad students — and you got what you got.

A situation where very real grievances weren’t addressed, and where it took protests — a student almost killing himself with a hunger strike — and a football team taking what is, in many respects, an unprecedented act of civil disobedience, to get this guy to exit stage right.

Some critics of the protesters have argued that Wolfe lost his job simply because he answered one question the wrong way.

That one incident was catalytic. But it has more to do with the vandalism that has been breeding on campus; the fact that the student body president, who was black, was assailed with racial epithets and the school didn’t do anything. And these things happen with great regularity. Students come forward, and say that they don’t feel safe walking home after dark because other students and people in the community pull up in trucks and yell shit at them.

I would argue that people on social media, or radio, or television, saying, “Oh, they only wanted him out of there because they're the p.c. thought police and he just happened to misspeak on that question” — I think those people have an absolute hard-line agenda. They don’t want students organizing or speaking out. [Focusing on that one question] is a way to further marginalize their grievances, which run really deep — far deeper than one statement on one phone-cam one evening.

You've written that the protests at Mizzou complicate or run against a common narrative depicting students as, basically, powerless. Can you tell me more about that trope; and why you think what's happening at Mizzou is such an important counterpoint?

First of all, the fact is that most people view college athletes very negatively. They say, “What are they complaining about? They get a free education.” What they ignore is the incredible amount of exploitation that [college athletes] go through; the absence of their ability to earn any income, even though they are generating billions of dollars in the industry; even their inability to take their classes, or the fact that most college athletes in revenue-producing sports have year-to-year scholarships and are there are at the pleasure of the coach.

But the people, who actually do care about the plight of the revenue-producing, disproportionately black college athletes, too often speak about them in terms of their powerlessness and in terms of how they’re screwed over. They don’t see them as actors who actually have a tremendous amount of social power; and you see in Missouri how much power they actually have.

Where does that power come from?

I mean, you’re talking about a campus that is 7 percent black and a football team that is 69 percent black. And you’re talking about a school president — and this doesn’t make him different, special, evil or anything; he's actually very ordinary — who put a tremendous emphasis, financially and socially, on football. And this drove a lot of students, who feel that there are a lot of issues of systematic oppression [on campus], to think, “Oh, so this is the top priority? To make sure we support the football team?”

It was Tim Wolfe who, in a very banal, ordinary fashion, put the football team in the center of the school’s life; so when the people who were responsible for actually playing [football] withdrew their labor, and when the head coach, Gary Pinkel, who makes $4 million a year, [supported his players] — you’re not going to win that fight. It is a demonstration of the social power [the players] have, and I guarantee that they have been meeting about this in NCAA headquarters in Indianapolis because I’m sure it scares the living shit out of them.

Yeah, I wanted to ask you about that next. To put it lightly, the NCAA doesn't have the best track record when it comes to the way it treats its labor force. How do you expect they'll respond to this? Do you think they'll accept it; or do you think they might come down on these kids or the coach later, when the media is no longer paying close attention?

I’m sure there is a discussion about coming down with a hammer, about making things like this some sort of a broad-based rule with immediate suspension, or the [rescinding] of your scholarship — basically treating political action like drunk driving, like a kind of infraction that you need to be penalized for.

But I also think there will be heads in that meeting, who would think that having that codified would be more than the NCAA could bear; at this point, Comcast might be the only company that is despised more than the NCAA.  So, I think what they’re going to do, in meetings, is try to make it very clear to athletic directors and coaches that they hold a tremendous amount of power in this situation, and that they need to be able to exercise this power to keep their indentured servants in lock.

What about the coach, Pinkel? As you noted, it was a big, big deal for him to back his players the way he did. Do you think some Mizzou boosters might be keeping quiet for now but will remember this and punish him for it later, if they can?

Gary Pinkel, I think, is a different kind of coach. You saw that when [former University of Missouri football star] Michael Sam told the world he was gay. Missouri is in a particular state of crisis. And Pinkel saw that players were coming up to him, crying; and it was very difficult for him to be hard-headed in the face of that.

What will be interesting to see is how this will affect his recruiting. Not to be overly mercenary about this — and I’m certainly not saying that Pinkel was being Machiavellian — but imagine him sitting in the living room of a working-class black family, and he's asking them to trust him, and he’s saying, “What other coach can assure you that I have your son’s back, and that I have his interest at heart on a day-in, day-out basis?”

And the college's boosters?

These boosters are all bottom-liners; they care about the game on Saturday. What they want is the team producing on Saturday. That is what matters in the end.

Lastly, I wanted to ask you about how this incident should influence the way we understand the relationship between students and student-athletes. You've noted that while the team's threat to strike was sort of the tipping point, it came after a lot of hard work and organizing from other students on the campus. We tend to imagine that the big-time college athletes sort of live in a different world than the rest of the student body; is that true? And how might this example change that?

Honestly, from what I am hearing and from my own reporting at Missouri, and in general, that separation is very real. It is not just a perception. It is something that is organized by the administration on these big football schools. Big-time athletes have separate study halls, dorms and cafeterias. The separation is organized to keep everyone apart, so they don’t feel the general friction and rhythm on campus — and also so they concentrate on game day.

So I think what this shows is that if student activists make the effort to reach out to student athletes, to reach out to [those in] the revenue-producing sports — if they don’t just speak to them about what is happening on campus, but also listen to their grievances, which are very real, then they have a different kind of power on the campus and a different kind of leverage. The more non-isolated the athletes become, the more powerful movements for change can be.