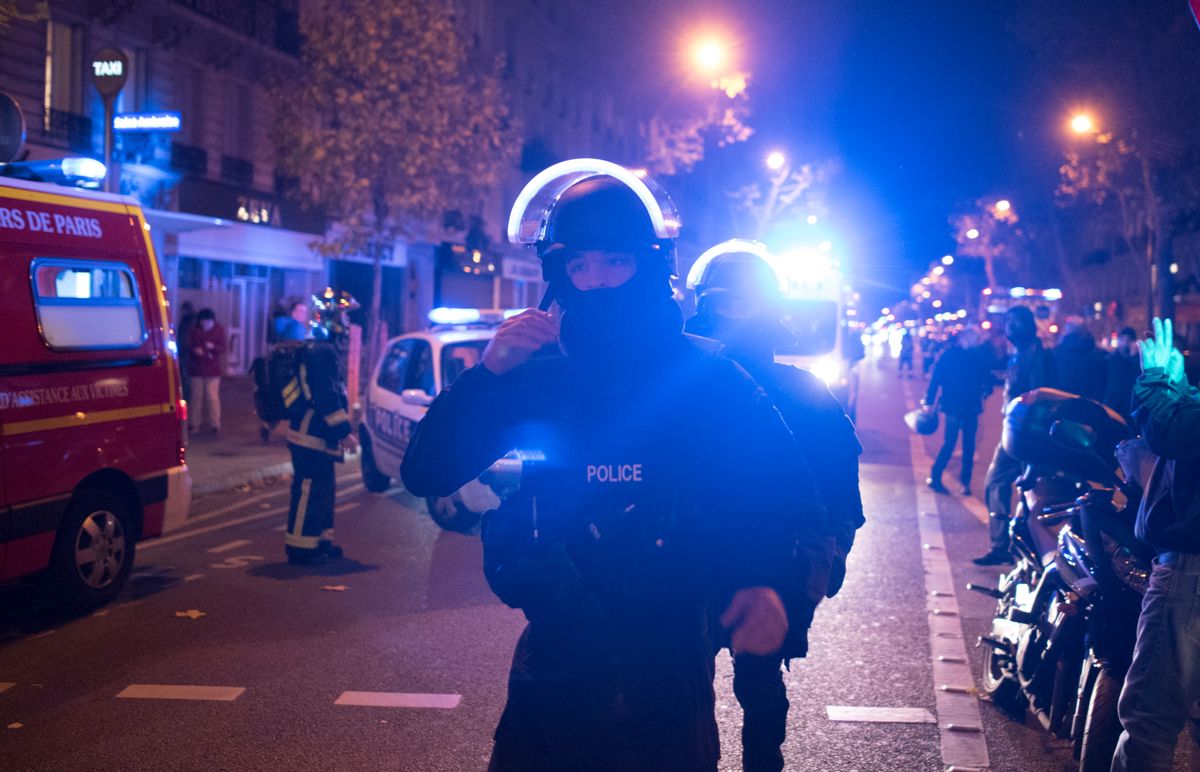 PARIS (AP) — The latest on shootings and explosions in Paris. (all times local):

Two Paris police officials say security forces have ended their assault on a concert hall filled with hostages, killing at least two attackers. Neither official could be named, citing ongoing operations throughout the city.

One official described "carnage" inside the building, saying the attackers had tossed explosives at the hostages. Both officials said they expected the toll of victims to rise.

World leaders have expressed shock at the violence in Paris.

German Chancellor Angela Merkel says she is "deeply shaken by the news and pictures that are reaching us from Paris." The German leader issued a statement saying her thoughts were with the victims "of the apparent terrorist attack."

The Secretary-General of the NATO alliance says he is "deeply shocked by horrific Paris attacks."

Jens Stoltenberg said in a Twitter message that "We stand together with the people of #France. Terrorism will never defeat democracy."

U.N. Secretary-General Ban Ki-moon is condemning "the despicable terrorist attacks" in Paris and is demanding the immediate release of numerous hostages being held in the Bataclan theater.

Three police officials confirm that security forces have launched an assault on the Paris concert hall where hostages have been taken.

None of the officials could be named when discussing the ongoing operation, which several officials said involved dozens of hostages.

The Paris police prefecture told resident to remain home and avoid going out unless absolutely necessary.

Automatic gunfire and blasts have rung out from the area of a Paris music hall where police say people are being held hostage.

Scores of police are surrounding the Bataclan concert hall, and sirens are wailing throughout the neighborhood.

The gunfire began soon after French President Francois Hollande said security forces were launching an assault on one of several sites targeted in attacks Friday night around Paris.

A police union official says there were two suicide attacks and a bombing near the national stadium where France and Germany were playing a friendly match.

The official, Gregory Goupil of the Alliance Police Nationale, whose region includes the area of the stadium, said there were at least three dead in the attacks near the stadium, near two of the entrances and a McDonalds restaurant.

He said the explosions went off simultaneously. He did not provide more details.

Although no one has claimed responsibility for the Paris attacks, some terrorism experts say the Islamic State group is likely responsible.

Brian Michael Jenkins, a terrorism expert and senior adviser to the president of RAND Corp., said the extremist group is clearly the name at the top of everyone's list." He said this was because the tactic used — "multiple attackers in coordinated attacks at multiple locations" — echoed recommendations published in extremist group's online magazine,

James Woolsey, a former director of the CIA in 1993-195 and now chancellor at the Institute of World Politics, also told the BBC he suspected the Islamic State because the coordinated nature of the attacks required government-style planning.

President Barack Obama is calling the attacks on Paris "outrageous attempt to terrorize innocent civilians" and is vowing to do whatever it takes to help bring the perpetrators to justice.

Speaking to reporters at the White House, Obama said he would not speculate about who was responsible.

He called the attacks a "heartbreaking situation" and an "attack on all of humanity."

Obama was briefed on the attacks Friday by his counterterrorism adviser Lisa Monaco.

The attacks come as the president is preparing for two trips abroad. He's slated to leave Saturday for a nine-day trip to Turkey, the Philippines and Malaysia. He due to travel to Paris for climate change talks at the end of the month.

French President Francois Hollande says he is closing the country's borders and declaring a state of emergency after several dozen people were killed in a series of unprecedented terrorist attacks.

Hollande, in a televised address to his nation, said the nation would stand firm and united against the attackers.

He said security forces are assaulting one of the sites hit by Friday's attacks, without elaborating.

British Prime Minister David Cameron says he is "shocked" by the Paris attacks and violence.

Cameron said on Twitter "Our thoughts and prayers are with the French people. We will do whatever we can to help."

French police say at least 35 were killed in multiple acts of violence took place in Paris Friday night, including shootings at restaurants and a hostage-taking at a music theater.

A White House official says President Barack Obama has been briefed on the attacks in Paris.

The official says counterterrorism adviser Lisa Monaco briefed the president. The official was not authorized to talk about the private discussion and demanded anonymity.

Obama is slated to travel to Paris at the end of the month to attend a United Nations conference on climate change.

Hundreds of people spilled onto the field of the Stade de France stadium after explosions were heard nearby during a friendly match between the French and German national soccer teams.

A stadium announcer made an announcement over the loudspeaker after the match, telling fans to avoid certain exits "due to events outside," without elaborating.

At first that prompted some panic, but then the crowds just walked dazed, hugging each other and looking at their phones for the latest news of the violence.

Many appeared hesitant to leave amid the uncertainty after France's deadliest attacks in decades.

Former U.S. Secretary of Homeland Security Michael Chertoff says it is too early to know exactly what was happening in Paris.

Social media posts from purported ISIS supporters could indicate that "there was a group waiting for this, but it could be a group watching," Chertoff said in an interview with MSNBC Friday night.

"I don't think we can say this proves anything, but again it supports the idea that it's terrorism," Chertoff said.

John Cohen, a former Homeland Security Department counterterrorism coordinator, say the presence of multiple attack scenes at the same time suggested a coordinated effort to "send a message" and raises immediate terror concerns, including for other cities in Europe and potentially the United States as well. He said both Al Qaida and ISIS have relied on the strategy of coordinated attacks in the past.

A Paris police official said there were at least 100 hostages in a Paris theater following shooting and explosions at two sites in the city.

Multiple officials, including one medical official, put the number of dead at between 35 to 40 people.

All officials spoke on condition of anonymity because they were not authorized to be publicly named according to police policy.

U.S. Homeland Security Department officials monitoring the attacks in Paris say there is no known, credible threat against the United States.

DHS officials are in contact with their foreign counterparts amid reports of multiple shootings and explosions in Paris.

Police officials in France say at least 26 people have been killed and a hostage-taking situation is underway at a theater.

Two police officials say that at least 26 people have been killed in shootings and explosions around Paris, in the deadliest violence in France in decades.

One of the police officials said 11 people were killed in a Paris restaurant in the 10th arrondissement and about 15 killed in the Bataclan theater, where a hostage-taking is under way.

Both officials spoke on condition of anonymity because they were not authorized to be publicly named according to police policy.