Trump is on the warpath: Iowa voters are "stupid" and Ben Carson is "pathological" like a child molester 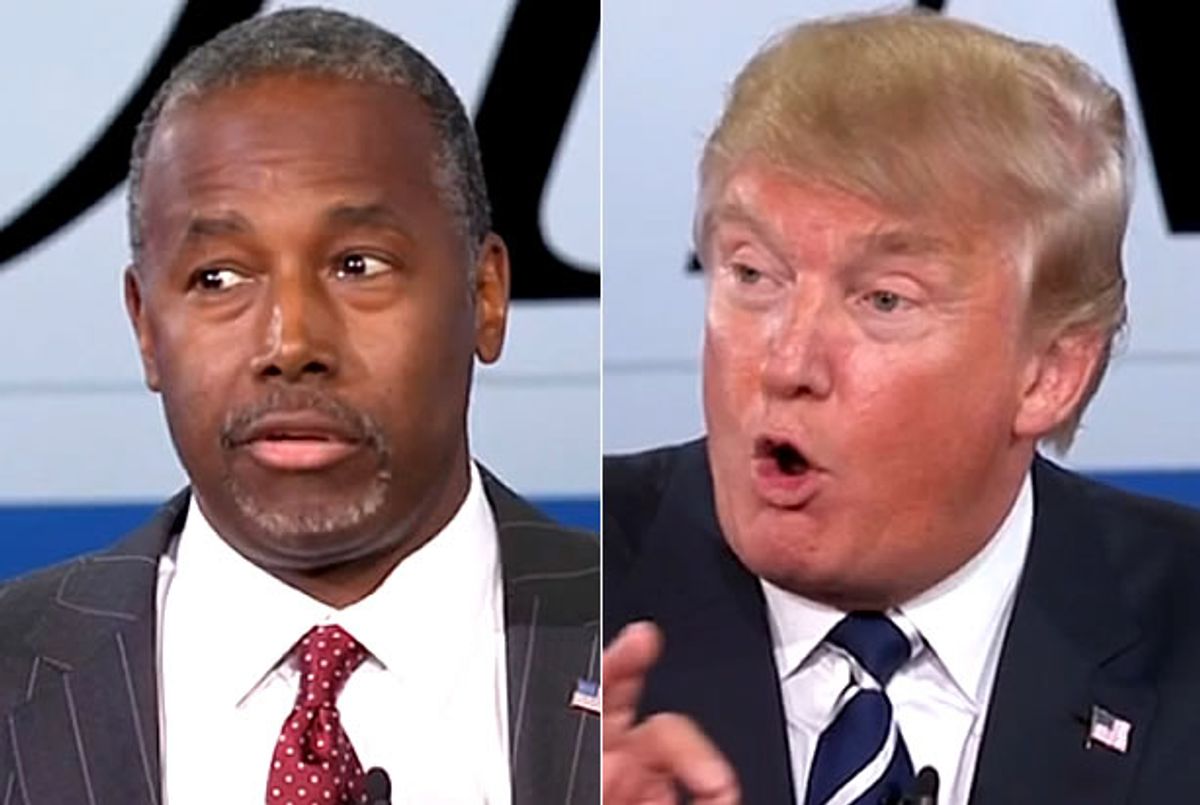 "First of all, I like him," Donald Trump said of Ben Carson before launching into a brutal two-part takedown of the famed neurosurgeon's embellished personal narrative that included a comparison to child molesters and an insult to the "stupid" voters of Iowa for good measure.

A week ago, Carson dominated headlines when major tales in his foundational personal narrative failed to hold up under increased scrutiny. After spending the weekend lashing out at the media and drumming up base support, Carson cruised through the fourth GOP debate without any of his Republican rivals (or the moderators, for that matter) attacking the glaring discrepancies for fear of blowback, and all the while The Donald got lost in the headlines.

Thursday night, the blustery insult machine that propelled the former reality TV star to the top of the crowded Republican pack last summer came roaring back, with its target set firmly on Carson.

Trump referred to a specific passage in Carson's memoir, "Gifted Hands," in which he wrote, "I had what I only can label a pathological temper — a disease — and this sickness controlled me, making me totally irrational."

Trump continued, making a shocking comparison between his neurosurgeon competitor and predators. “I could say they don’t say, as an example, a child molester, you don’t cure these people. You don’t cure a child molester. There’s no cure for it. Pathological, there’s no cure for that. Now, I didn’t say it, he said it in his book. So when I hear somebody’s pathological, when somebody says, I went after my mother with — and he’s saying it about himself with a hammer and hit her in the head, I say, ‘whoa, that’s a big statement.'”

The depiction of a black man as uncontrollably violent and dangerous is an infamous racist trope known as the “brute caricature.” According to the Jim Crow Museum of Racist Memorabilia “[t]he brute caricature portrays black men as innately savage, animalistic, destructive, and criminal — deserving punishment, maybe death. This brute is a fiend, a sociopath, an anti-social menace.”

Trump also shared his complete disinterest in his deeply unpopular standing with Latino voters during the "Outfront" interview. "I'm leading with the Hispanics that are here legally," Trump told Burnett, before pointing to the appointment of an undocumented immigrant to a small California town's parks and recreation committee to falsely claim that undocumented immigrants are allowed to vote.

After the CNN interview, Trump then went on an hour and a half long theatrical rant in Iowa, this time offending the voters of the state to their faces. "How stupid are the people of Iowa?" he asked the gathered crowd in Fort Dodge.

"He goes into the bathroom for a couple of hours and he comes out a Christian. Give me a break," Trump said of Carson before repeating his "pathological" insult.

Trump then bizarrely began to act out some of Carson's most infamous tales of adolescent violence to demonstrate how implausible the good doctor's version of events really looks. Stepping away from the podium, Trump demonstrated how his belt would move upward or downward if it were indeed struck by a knife, reenacting one of Carson's claims of attempting to stab his old friend.

"I never did that!" Trump guaranteed the crowd:

Watch both Trump's CNN interview and over-the-top Iowa speech below: