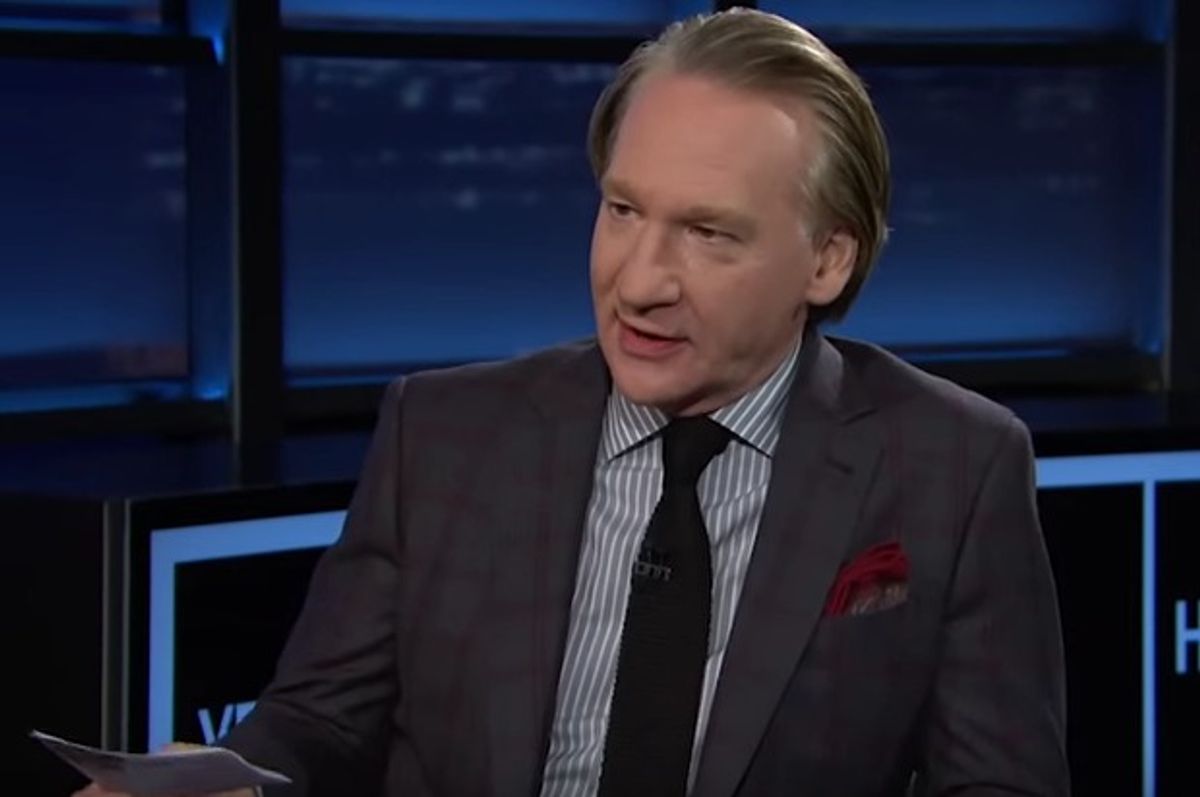 “I’m not demonizing, I’m characterizing,” Bill Maher said of the entire religion of Islam on Friday evening, in what appeared to be complete sincerity. Maher is a professed liberal comedian with a show called “Real Time” on HBO, and yesterday, the first live major political reaction to the coordinate terrorist attacks in Paris was on his show.

At the time "Real Time" was filmed—10 p.m. on the East Coast—the identities or affiliations of the terrorists that killed over 120 civilians in Paris were not known. Rumor had it that they were acting on the behalf of the Islamic State, commonly known as ISIS — Wolf Blitzer was saying "if it's ISIS" early in CNN's breaking news coverage. In spite of chaos and terror, France 24, the primary source of French news for those of us outside of France, was incredibly restrained. Speculation was ruthlessly curtailed; assumptions and confabulations were sidelined. Other discussions may have been happening elsewhere, but the primary feed of French news to English-speaking networks—so primary, indeed, that CNN, CBS, and the BBC were simulcasting from it—was a deliberate and calm livestream of reportage.

Maher nodded to the ambiguity, but added, due to the use of AK-47s and suicide vests, "It's probably not the Amish." Later this morning, it was reported that ISIS claimed responsibility for the attacks. Once again, Bill Maher was right.

It is the rightness of Bill Maher that, to anyone with a more developed sense of compassion, ends up being the most frustrating. Anyone that morally superior should be wrong all the time, just so the wide grin of their unflappable arrogance might be rightfully deflated. But Maher's show—caught up in the semantics between demonizing and characterizing—reflects exactly what is happening in the rest of the world right now. Bill Maher may sound entirely reductive when he dismisses the existence of moderate Muslims, or conflates ISIS and very extreme practices of Islam like female genital mutilation with the entirety of the religion. But he is vocalizing the same dismissal and conflation that has characterized all of Western media since 2001—albeit, not always in quite so many words. His on-going cross-examination of Islam is also the same kind of prolonged trial that the media subjects to Muslims around the world. Within mere minutes of the reported attacks, grandstanding conservatives on Twitter were shouting about refugees, immigration, Hillary Clinton's culpability, and how complaining college students should stop complaining, because the only time anyone is really infringing on your rights is when an Islamic terrorist is wearing a suicide vest. Maher puts Islam on trial because everyone else is doing it. He's right; he's just, in the immortal words of "The Big Lebowski," also an asshole.

The comedian didn’t deviate too much from his pre-written set to address the events in Paris—which were still unfolding as the taping went on, a tricky line to walk for any showman. (He sang a few bars of "La Marseillaise" to open the show.) But in the sit-down interview, with Daily Beast writer Asra Nomani, Paris came up again and again. Nomani is an activist who was raised Muslim and now campaigns for radical reform within the religion; her angle, specifically, is to raise the status of women in Islam. With Maher, Nomani ended up repeating and verifying all of his talking points, in what read like an exercise of ego. Following yesterday's terrorist attacks—in Beirut as well as Paris—it felt painfully insensitive, a dismissal of the real human tragedy of the terrorists' actions in favor of proving to each other who was more right about it.

And being right is a weird and complicated thing to be, in the aftermath of inexplicable, unimaginable horror. There is something laudable, to a degree, about the way that Maher identifies the most corrosive issues in liberal politics and shapes them into some kind of progressive agenda; jokes aside, he manages to identify and confirm the worst fears of the audience, bleeding out the righteous indignation and turning it into some semblance of talking points.

What's scary is that those talking points—that agenda—exist mostly to allow Maher and his audience to be freed from culpability for the ills of the world. Only idiots would take religion so seriously; only idiots would kowtow to political correctness; only idiots would vote Republican. Maher is obsessed with being right, and sure, he often is. Maybe we would all be better off if none of us, for example, believed in a higher power and/or subscribed to organized religion. But here, in this universe, many of us do.

In a line of thinking that, it turns out, dovetails rather well with what ISIS wants to happen, Nomani and Maher repeatedly posited that there are no moderate Muslims. Maher recounted a letter he received from a man in Saudi Arabia, who told him that all moderate Muslims are now in jail. "I don't understand liberals who don't understand this man," he said. Maher's closing statements expressed similar bafflement at his chosen audience. After six minutes of telling white people they have things really good—in terms of incarceration rates, personal wealth, and standard of living—he made a quip about black women, joking that the reason they have less individual savings than white women is because they went and spent it all on a weave. The audience gasped more than laughed. “Fuck you, you politically correct assholes,” Maher said, laughing. “One joke! One joke about the blacks."

I think Maher confuses compassion with idiocy. Compassion is a quality that has nothing to do with how smart or how right you are. It's a quality that is at the root of not wanting to make generalizations, and at the root of wanting to say things that do not horrifically offend other systematically oppressed people. I fully believe that Maher doesn't understand those well-meaning liberals, those politically correct assholes. I would just rather be one of them, I think, than to merely be right; I would like to be able to understand another point of view, from time to time. And especially on a day like yesterday, I would like to be able to feel compassion.