Here's what I've got for you, Kid: Lucky for my daughter, she's half made up of her dad so the bad knees and slow metabolism aren't a sure thing 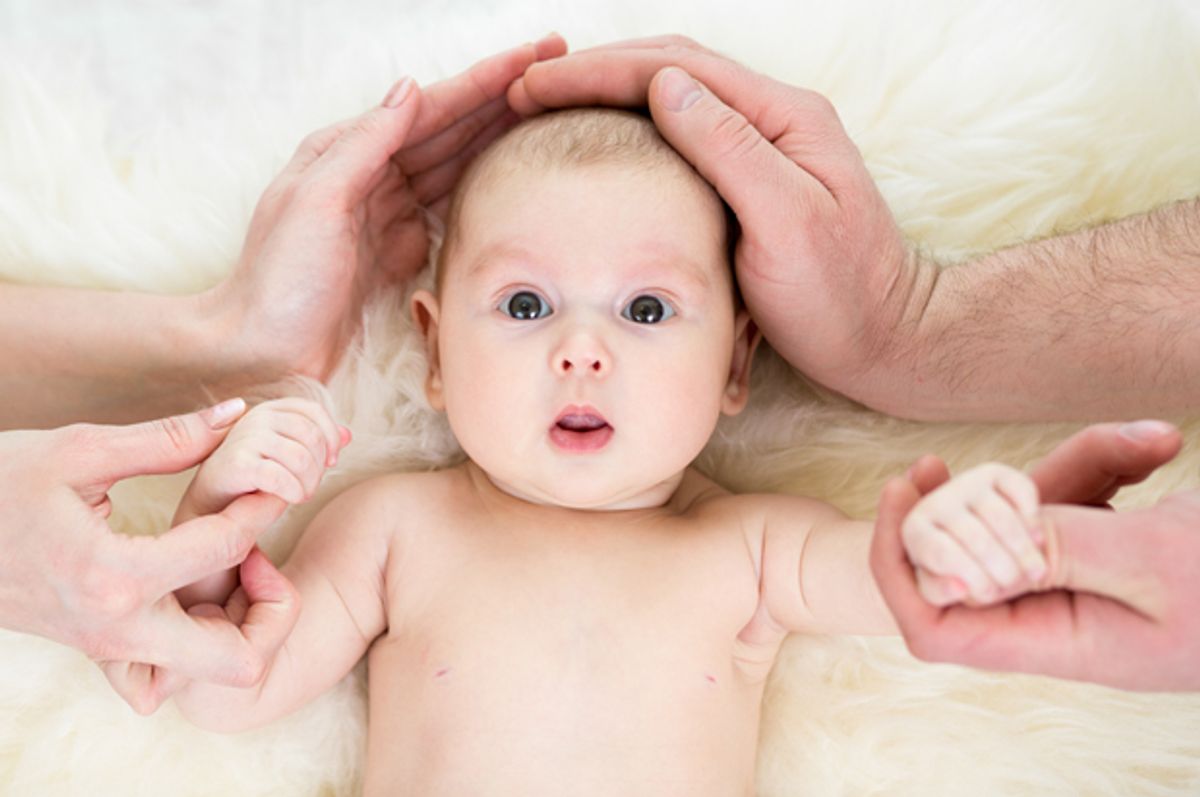 A few months ago I paid $99 to spit into a cup. I sent the cup to a lab, and a few weeks later I got an email detailing my ancestral composition (mostly British, Irish and German. Absolutely no surprises there; I look, much to my dismay, like a less-murderous Ilse Koch).  It was nice, having a tidy chart of my ethnic provenance, a map of my little store of DNA. I mean, it’s a dead boring chart, ethnicity-wise, but still.

I’ve passed this genetic bundle on to a new human. My daughter is, delightfully, a real 50-50 split between her father (Italian, Irish) and myself (Bitch of Buchenwald). She has my hair and eyes, and his full lips and upturned nose. Making a next step in a genetic through-line leads one to meditate on the nature of that through-line – of heritage, heritability, what it means to be of a people or from a place. In other words, what else is in this bundle I’m giving her?

Where I’m from is a non-starter in terms of my own identity, and certainly of hers. I grew up two towns east of Hartford, Connecticut (or, two units of dullness away from Dulltown, USA, if you prefer). I have no familial ties to the area – my parents both hail from Houston, and nobody in my family lives in Connecticut anymore. I left my town as quickly as I could and never looked back. I feel a pang, a sense of having missed out on something, when I hear people describe a sense of being from a place – like, you have a connection to the place where you were born? The sights and smells and rhythms of your home are a part of you, and not something to shed as quickly and ruthlessly as possible? That sounds nice. It is my hope, raising our child in Brooklyn, that she will feel an enthusiasm for her natal lands that I did not. It is entirely possible that she will disappear into the wilds of Montana to live out her days with only a Husky for companionship and curse us for raising her in the mass of humanity that is New York.

And what about ethnicity, anyway? My connections to the Old Countries have long been stretched past the breaking point; both sides of my family have been in Texas so long that, my parents having moved North, Texas itself is the “old country.” Like a lot of suburban white people, my folkways consisted of, more or less, going to the mall and watching television. Go back far enough in parts of my family, and you get into some business I am truly not looking forward to addressing with my daughter.  I do not, in all seriousness, know how to tell her what kind of people she’s from. Boring, shading back into monsters? Will that do?

Other items in the grab bag: Bad knees. Slow metabolism. Stubby hands. Skin problems (already old hat over here; try Vanicream!). If she winds up with my frame, she’ll look pregnant her whole life. Oh and a funhouse’s worth of mental disorders from schizophrenia to psychotic breaks to plain ol’ depression, BUT EVERYTHING IS GOING TO BE JUST FINE DON’T YOU WORRY. I mean, it skipped me, so far, but the game’s not over quite yet – there’s still time for me to be bundled off to the cuckoo’s nest. I hope if it happens when she’s an adult, she puts me somewhere nice.

What’s not in the bag? I recently bought Martha Stewart’s handbook of how to do all the things around one’s house.  I bought this book because I know how to do none of the things. This is not because we had any kind of housekeeper (we did not), but because things were more or less left undone or done wrong – not in a hoarders-level kind of wrong, mind you, but with the exception of my father showing me how to sew on a button, the level of Important Life Skills being passed along was minimal at best. As a result I admire – worship, maybe – competence and skill in others; nothing pleases me more than watching somebody who knows what the hell they’re doing do a thing, whether it’s fixing a leak, hanging wallpaper or just playing pool. I crave this competence; I lack it sorely. But then, I’m only about a quarter of the way through the Martha book.

My daughter is, as I write this, only 3 – certainly nowhere near formed, but aspects of who she might be as a person are shining through. She loves arranging things in tidy rows, a neatnik (or possibly OCD) thing she definitely didn’t get from me – but I see the pride shining in her neatnik (OCD?) father’s eyes. We brought her recently to a book event I did at a bookstore that has a bar in it, and she was gloriously in her element. Hugging strangers at a bar? That’s my kid, all right.

I’m trying to up my game in hopes of having some skills – besides dumb arts-related stuff – to pass on to my daughter. We’re unlikely to become Doomsday Prepper-level DIYers, but I can make sure she has as full a complement of Basic Grown-up Life Skills as possible.  We have a whole big beautiful city and a whole big beautiful world to give her, and my hope for her is that she will navigate it with grace and aplomb – especially the ugly parts. I can’t do much about the past, but I can raise her to be a kind and conscious person, aware of her privilege in the world and her duty to refit society in a way that levels the playing field. I can and will teach her to sew on a button. And lucky for her, she’s half made-up of her daddy. I mean, he’s Canadian, after all.

Emily Flake is the author of "Mama Tried: Dispatches From the Seamy Underbelly of Modern Parenting."