The Democrats face off: A good, substantive debate that put Hillary's weaknesses on display

The second Democratic debate saw Hillary stumble a bit on national security and Wall St., but to no great effect 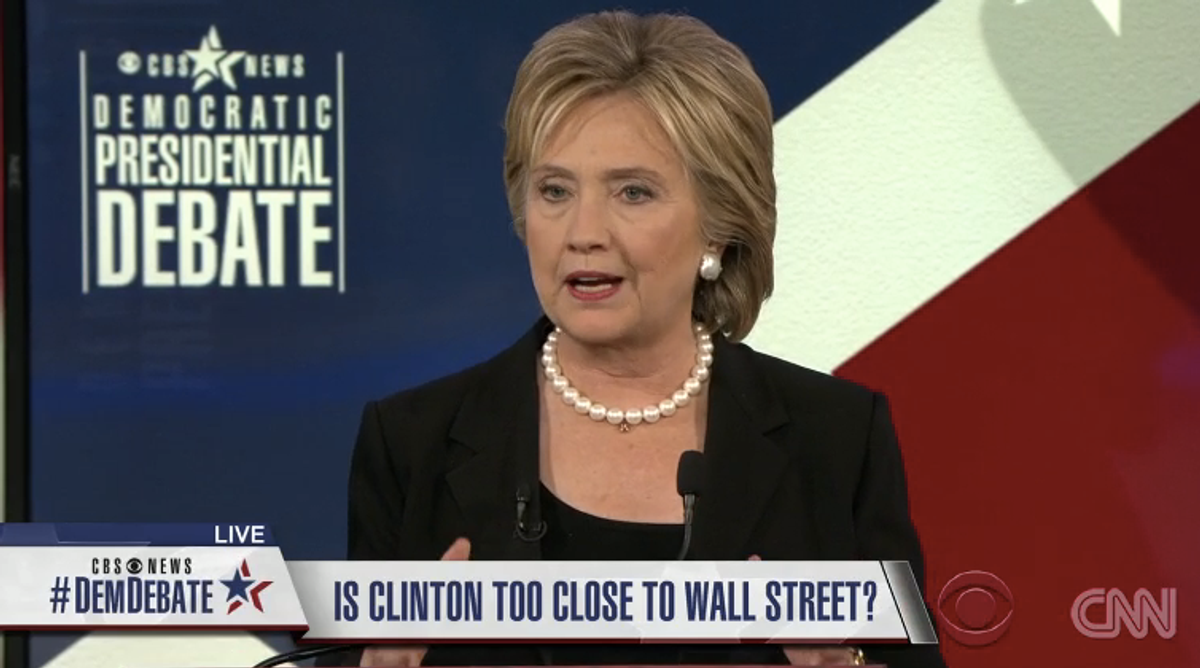 The second Democratic 2016 presidential debate just wrapped up, much to the delight of journalists and other social pariahs who spent their Saturday night listening to three people snipe at each other over Depression-era bank legislation. It was actually a pretty good debate, with the moderators tossing out mainly substantive questions with good follow-ups, and the candidates picking away at each other on the areas where they actually disagree.

On the political front, this debate laid out many of the weaknesses that Hillary Clinton brings to the race as the frontrunner and heavy favorite, and she didn’t do the greatest job in neutralizing them. The gruesome terrorist attacks in Paris on Friday night shifted the debate’s early focus to national security, which, for reasons that aren’t entirely clear, people tend to view as one of Clinton’s inarguable strengths.

As the candidates dug into the broader issue of terrorism and the specific problem of what to do with the Islamic State, the discussion invariably turned back to the invasion of Iraq, the event that precipitated all the current chaos and slaughter. The growth of the Islamic State in Libya led to questions from CBS’s John Dickerson about the wisdom of the Obama administration’s Libya intervention. Hillary voted for the Iraq invasion (which she now says was a mistake) and she backed the Libya intervention (which she still defends). Dickerson drew a line between the two and asked “how did you get it wrong with Libya if the key lesson of the Iraq war is have a plan for after?” Clinton’s answer was that they did have a plan, but it’s been beset by “turmoil and trouble” as a part of a broader “arc of instability” in the Middle East. True enough! But that gets us right back to the question of whether the more aggressive interventionism favored by Clinton is actually a good idea.

She was able to wriggle out of this to some degree by making a show of the fact that she was the only person on the stage with any foreign policy experience to speak of. Clinton has a firmer command of and greater interest in national security issues than Bernie Sanders, and it shows. And while Bernie is quick to point out that he opposed the Iraq war, he's reticent to use the war as a means to attack Clinton’s judgment in the way that Barack Obama did. Hillary’s much better able to clean up her messes when there’s no one pressing her to take ownership of them.

When the discussion turned to a topic Sanders really cares about – money in politics – more interesting things happened. Bernie lashed into Clinton for her ties to the financial sector and the huge campaign donations she receives from Wall Street. “Let's not be naive about it,” he said, “Why do -- why, over her political career has Wall Street been a major -- the major campaign contributor to Hillary Clinton? You know, maybe they're dumb and they don't know what they're going to get, but I don't think so.” That led to the strangest moment of the night: Hillary invoking 9/11 as a justification for Wall Street’s generosity towards her:

Neither Sanders nor Martin O’Malley pressed her on this flagrant bit of pandering, and she would have ducked it entirely had the moderators not read a tweet from a viewer who had a “wait… what?” reaction to what she said.

But if I’m Hillary Clinton, I’m probably happy with how that debate shook out. She had her stumbles, but nobody was able to really make her pay for them, and overall performance was strong enough to keep the race pretty much where it is right now. And O’Malley actually had a surprisingly good night – he was more focused than the last debate, he stood by his position to have the U.S. accept 65,000 Syrian refugees, and had a great riff on the moral imperative of enacting immigration reform.

Speaking of immigration, the contrast between the Democratic debate and what we saw this week from the Republican candidates was stark. O’Malley and Clinton made clear, coherent pitches for reforming the immigration system and implementing a path to citizenship as necessary measures that are consistent with American values. On the Republican side, Ted Cruz and Marco Rubio are fighting to win over conservatives with increasingly punitive and hardline measures while Donald Trump and his draconian “deport ‘em all” policy hovers over everything. That difference between the parties on this issue could not be any clearer than it is right now, and that couldn’t have been lost on the people who watched this debate – assuming the audience wasn’t just sad, lonely journalists.