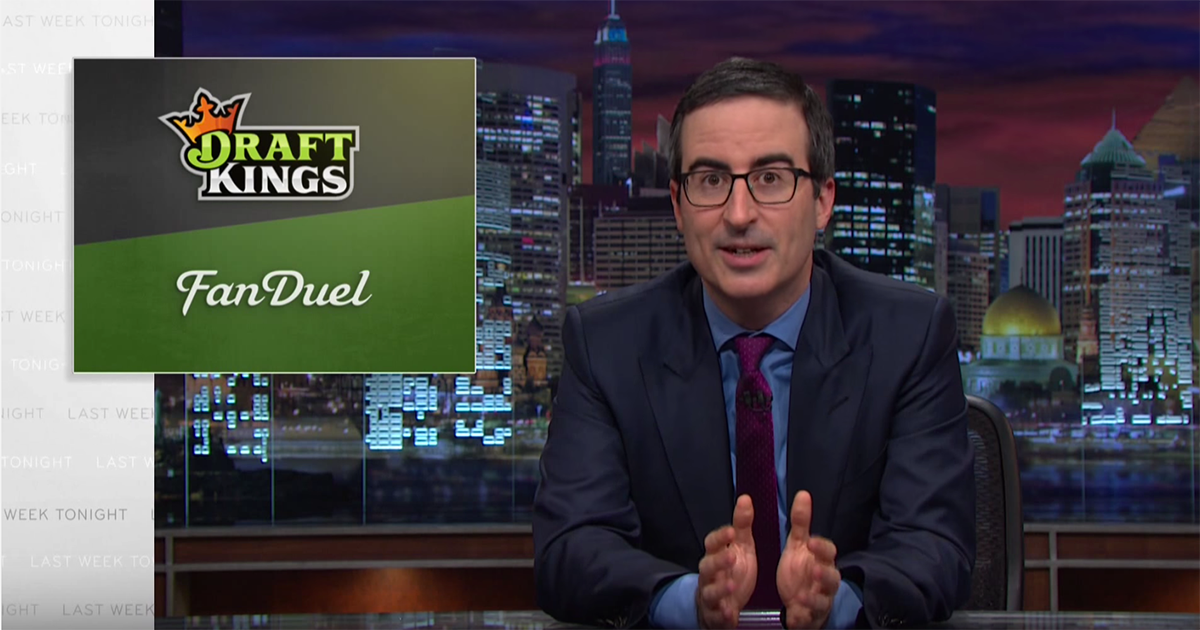 Fantasy sports were once nothing more than a weekly office pool, Sunday's "Last Week Tonight with John Oliver" preached. But now they're the addictive way that many are satisfying a sports fix.

"You can go online and typically pay an entry fee of anything from 25 cents to thousands of dollars, picketing for a week or just a day and compete against total strangers," Oliver said. "It's the same as seasonal fantasy the way a nice mug of tea is the same as a nice baggy of heroin."

Oliver says ads for things like DraftKings and FanDuel are all over radio and TV, particularly channels like the 50 or so ESPN channels there seems to be, and they're all encouraging another "hit."

"At this point," Oliver said, "there is almost no show that isn’t financially compromised by a relationship with daily fantasy. In fact, HBO is a subsidiary of Time Warner, which means that this joke about being compromised is, in a sense, being brought to you by FanDuel… Thanks, guys!"

Ads for these people purport to have tons of fans who "win big" but Oliver says that 85 percent of players don’t actually get anything in the end. "Fantasy sports are effectively dominated by numbers nerds with sophisticated algorithms," he explained. "Which is great news for anyone who wished 'Moneyball' could be a bit more boring. But it’s not great news for a casual player, and it somewhat undercuts the key selling point in their ads." Hey, it's a metaphor, right?

It turns out, the pool of data sharks is made up of former Wall Street banksters and the occasional professional poker player. "If it attracts the same people and requires the same sort of skills, it’s safe to say it’s somewhat similar," Oliver said about DraftKings overtly trying to advertise to online gambling fanatics. "They’re basically saying, ‘If you love gambling, you’ll love DraftKings… for completely unrelated reasons.'"

The interesting thing Oliver tells us is that high-stakes poker is illegal in most states, and the Unlawful Internet Gambling Enforcement Act of 2006 prohibited banks and other financial institutions from doing any kind of business with illegal online gambling operations. However, that law carved out a convenient loophole for fantasy sports. A loophole so big you can drive an entire half-time show through it.

So, winning a DraftKings or FanDuel tournament takes a near impossible amount of skill, which Oliver says helps these companies with the legal argument. But he hopes that the more the public becomes aware of just how impossible it can be to win on these fantasy sites, "the less appealing they become to the average player."

That's why Oliver teamed up with Seth Rogen, Mike Birbiglia, Jerrod Carmichael, Kathryn Hahn, and Martin Starr to talk about the lack of transparency in daily fantasy ads: