Our frustrated emoji year: A laughing-through-tears smiley face is the Oxford dictionary "word" of 2015 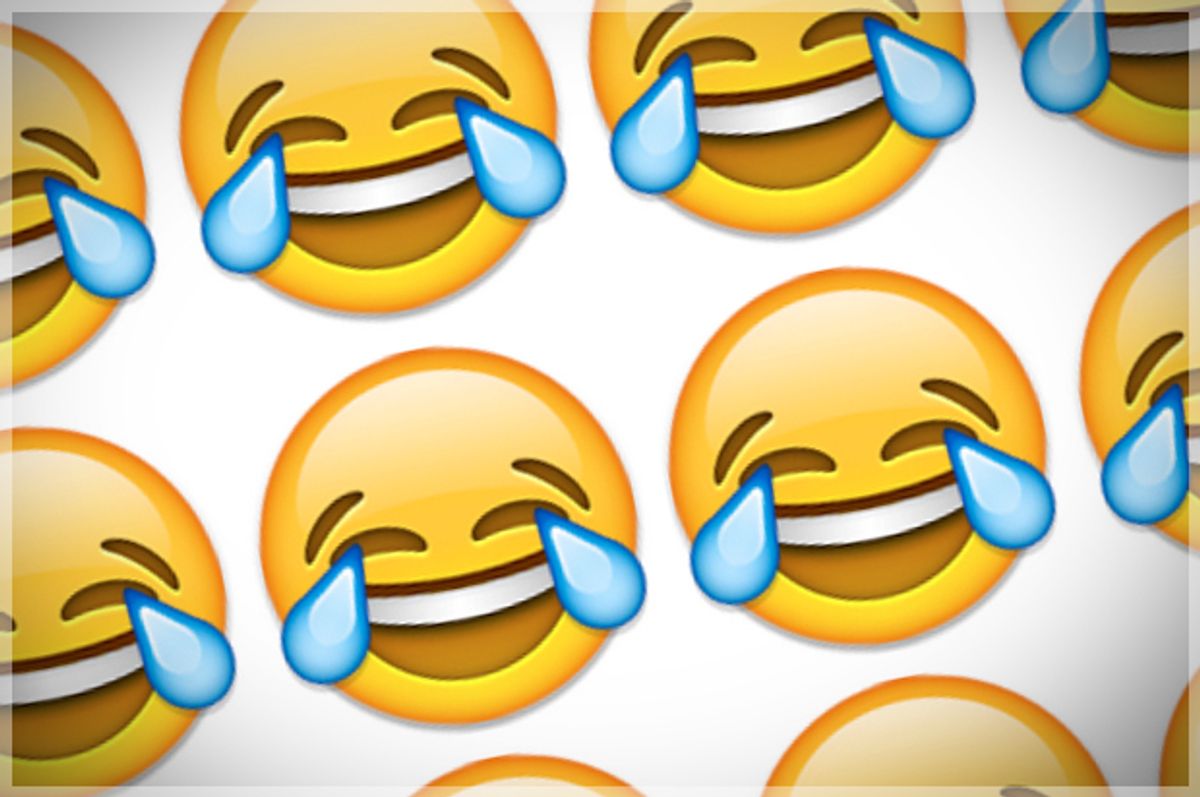 It’s been a big year for our culture. A huge year, one might say. Within the course of less than twelve months, we’ve witnessed history-making steps in the name of civil rights and social progress in both forward and backwards directions. We’ve become increasingly accepting of expressing sexual fluidity, and champion those willing to advocate for individual rights and question the norm.

Yes, it’s been a big year -- quite possibly indescribable in some cases. As it turns out, the Oxford Dictionaries agree.

This year’s Oxford Dictionaries Word of the Year isn’t a word at all. (A brief pause while you re-read that sentence, I couldn’t believe it either. Okay, let’s pick up.) The “word” best reflecting the cultural year in language is the “face with tears of joy” emoji. Seriously.

Other contenders on the short list of potential winners included “Brexit,” a term for the hypothetical departure of the United Kingdom from the European Union; the phrase “on fleek,” used as an adjective to describe something extremely attractive or stylish; and “refugee,” used in the standard sense to describe a person who has been forced to leave their country to escape war, persecution or natural disaster. These candidates ultimately missed the mark in being named the top word of 2015, which says a lot about our culture’s current emojinal state.

“You can see how traditional alphabet scripts have been struggling to meet the rapid-fire, visually focused demands of 21st century communication,” says Casper Grathwohl, President of Oxford Dictionaries in a release. “It’s not surprising that a pictographic script like emoji has stepped in to fill those gaps—it’s flexible, immediate, and infuses tone beautifully.”

One of the major draws of utilizing emoji is the adaptability of the symbol. It can be used to soften blows of sarcasm, as a more aesthetically-pleasing expression of “LOL”, and also to express frustration.

There’ve been many times when girlfriends recount text exchanges with would-be suitors over brunch or cocktails, and follow up describing a particularly sarcastic statement with “Well, I sent the crying while laughing emoji, so he knew I was kidding.”

In other situations, the emoji reflects situations that are a bit more grim.

“Laughing through tears” is frequently used as a buffer to express frustration at social injustices, a form of humor to deflect from the stark reality that we’re faced with situations so dire our language fails to accurately articulate the emotional implications.

The 2014 word of the year was “vape,” based on the rising popularity of electronic cigarettes. The top word of 2013 was “selfie,” which continues to dominate both our lexicon and Instagram feeds.

It’s not surprising that we’ve reached the cultural moment where an emoji most accurately captures the values of our culture. Utilizing the cutesy symbols used to be exclusive to teenage girls, but linguistic shifts now have emoji being used in meaningful ways by the likes of potential presidential candidates such as Hilary Clinton.

This year saw a solution to the backlash against light-skinned emoji bias, when the standard set was replaced by a broad spectrum of skin tones we can now choose from. This update not only reflected company’s receptivity to feedback from users, but showcased what seems to now be universal use of emoji based on multiple demographics. Emoji are so popular that it’s now possible to use them for weblinks.

I wonder about the future of emoji. Given the ubiquity of “selfie” and “vape,” it’s possible that in a few years we’ll see a movement away from the myriad tiny faces and objects currently used to express our emotional complexities. For many reasons I hope we do. While I enjoy the convenience and colorful display of emoji, there’s something derivative about it, limiting the value of a statement’s or expression’s potential impact.

I was at a party this weekend where a friend of mine read a poem that I’m still processing because of the way he pieced together his words and images. It made me realize how much I miss being gutted by language. Other listeners were similarly affected, reaffirming the power of words to take our breath away.

So while the “face with tears of joy” emoji may be the most common expression in our language, I’m willing to hold out for those rare moments that elicit actual tears of joy. I’d rather be written a love letter than sent a heart eyes emoji any day.