Birds of a wingnut feather flock together! 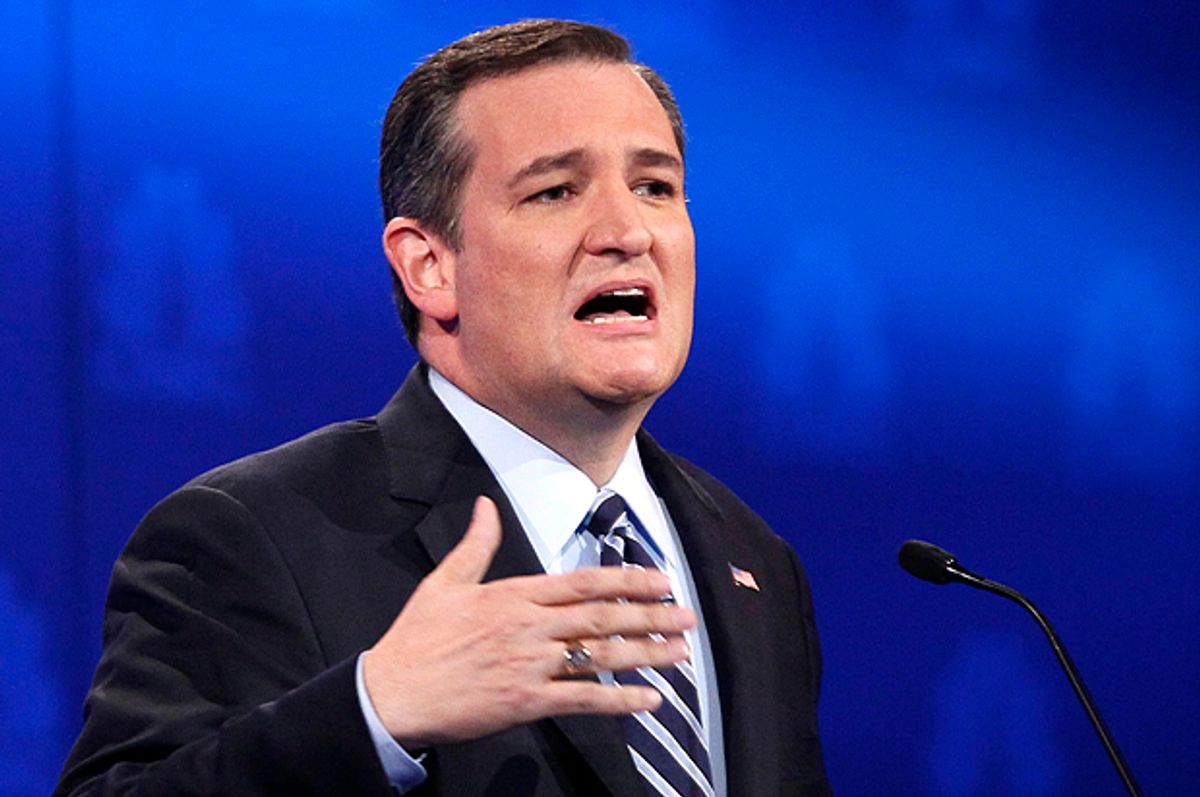 The Iowa Republican said that he had been praying for Cruz's presidential run for almost a year, calling the Texas senator "the candidate who God will use to restore the soul of America."

“I believe that Ted Cruz is the answer to my prayers," King said in a campaign ad announcing his endorsement.

King, who proclaimed Sarah Palin correct in describing parts of Obamacare as "death panels," said that Cruz had “unmatched intellect grounded in constitutionalism":

We need a president who is pro-life, pro-marriage, a constitutional originalist, who will make judicial appointments of judges to the Supreme Court and all federal courts who believe the Constitution means what is says and means what it was understood to mean when ratified

King's endorsement doesn't exactly come as a surprise, as the two share more than just a passion for extreme right-wing rhetoric, they're also friends. King explained his bond with the Tea Party Texan during a Sioux city rally last month, telling the crowd that he and Cruz had "went five hours digging into our constitution, our history, our faith, our religion." The pair also went pheasant together in late October.

King told reporters on Monday that he hoped his endorsement would spur a flood of evangelical support for the candidate whose father, Rafael, has also helped aggressively court evangelicals in the state. "Victory requires that he energize Christian conservatives for large turnout," King said. "Some said that didn't happen four years ago ... we can't have that again. [The candidate has] got to be able to inspire Christian conservatives." In 2012, King declined to endorse a Republican challenger to President Obama ahead of the caucuses. Rick Santorum eventually went on to win the Iowa caucuses.

For his part, Cruz thanked King for his endorsement in a statement on Monday and called his friend "a courageous conservative who stands up for our values and refuses to back down."

King, of course, infamously faced down a young woman who confronted him to protest his denunciation of all DREAMers as drug mules. "For every one who’s a valedictorian, there’s another hundred out there who they weigh 130 pounds and they’ve got calves the size of cantaloupes because they’ve been hauling 75 pounds of marijuana across the desert,” the influential Iowa Republican said in 2013.

King's conservative stamp of approval may just be the bump Cruz needs to propel him from a fourth place standing in Iowa to overcome less evangelical-friendly candidates like current frontrunner Donald Trump.