CNN reporter grills Ted Cruz over his anti-refugee stance: What would have happened to your father?

Cruz's father, Rafael, fled from Castro's Cuba but now the son of an immigrant wants to close the door behind him 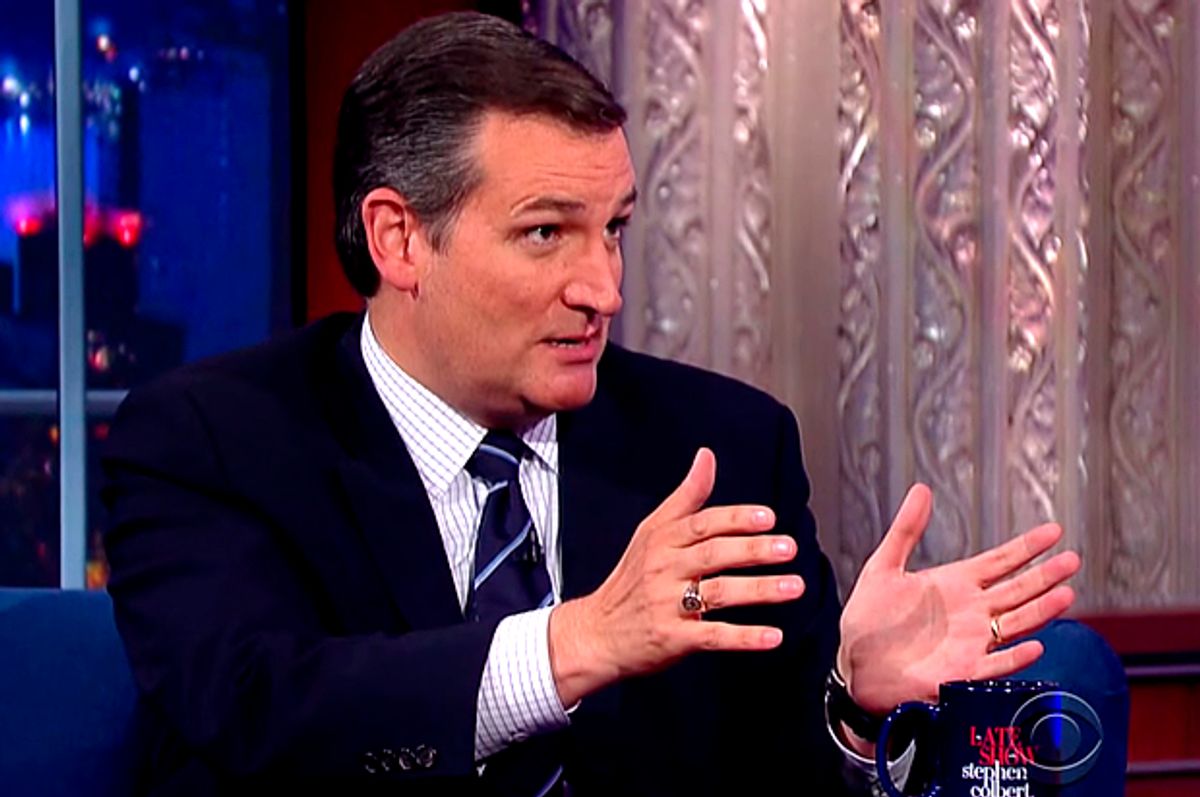 "When I hear political leaders suggesting that there would be a religious test for which a person who is fleeing from a war-torn country is admitted, when some of those folks themselves come from families who benefited from protection when they were fleeing political persecution, that’s shameful, that’s not American, that’s not who we are” Obama said during a G20 press conference, making a not-so-thinly veiled reference to the reckless rhetoric of GOP presidential candidates Ted Cruz and Marco Rubio, whose parents fled to the United States from Cuba.

“There is no meaningful risk of Christians committing acts of terror," Cruz said after Friday's terror attack, offering a religious test exemption for his proposed ban on Syrian refugees to the U.S.

On Tuesday, Cruz was pressed about his callous and apparently historically clueless response to to clampdown on refugees out of fear and for political posturing. Just last week, the Cruz campaign was forced to respond to charges this his father, Rafael, embellished his past as part of Castro's revolution. Despite that early support for a U.S. enemy, Rafael Cruz was eventually allowed to immigrate to the U.S.

“What would have happened if your father, who was trying to get from Cuba to the United States, and the political leaders said, ‘Nope, we don’t think so, because who knows? Maybe you could be somebody who could, you know, commit crimes against Americans,'” CNN's Dana Bash asked the Texas senator during an interview on Monday, pointing out Cruz's apparent hypocrisy.

“See, that’s why it’s important to define what it is we’re fighting,” Cruz said. “If my father were part of a theocratic and political movement like radical Islamism that promotes murdering anyone who doesn’t share your extreme faith or forcibly converting them, then it would have made perfect sense,” Cruz said.

Sure, waves of Cubans fleeing Castro's regime presented precisely no risks to the U.S. at a time of heightened Cold War fears and international spy games. Not. In fact, as Stephen A. Nuno explains at NBC News, no other single immigrant group may have been more feared as posing a threat to the U.S. than Cuban exiles:

As Cuban refugees flooded Miami after the Castro regime took over in 1959, the potential for insurgents was not far from the minds of Americans. It was not long before that the American press had zealously misquoted the Soviet Union's Nikita Khrushchev infamous boast to the West, "We will bury you".

Given the context of the threat of the Soviet Union, the potential for Cuban insurgents being inserted into the flow of refugees was not unreasonable. Thania Sanchez, Assistant Professor of Political Science at Yale University, points out, "There was certainly legitimate concern about how communist regimes would sneak in spies through refugees." Sanchez points out newspaper articles with titles such as, "Some Cuban Spies in Refugee Clothing", which talked about Castro's plans to insert "Red agents" among the refugees and how it was partly being coordinated with the Kremlin.

Sanchez points out that a report by the New York Times in 1960 noted that, "With few exceptions, those who have fled Cuba in 1960, for instance, could not be labeled as 'criminals' by any legitimate concept of justice. Many thousands among the refugees - doubtless a majority- are women and children who are simply tragic victims of a political convulsion with which they had nothing to do."

Cruz, apparently proud of his exchange with Bash, and ignorant of history, posted the interview to his site under the headline, "Ted Cruz Discusses Defeating Radical Islamic Terrorism":