"Fish don't like oil spills and neither do I": Finally, something environmentalists and conservatives can agree on 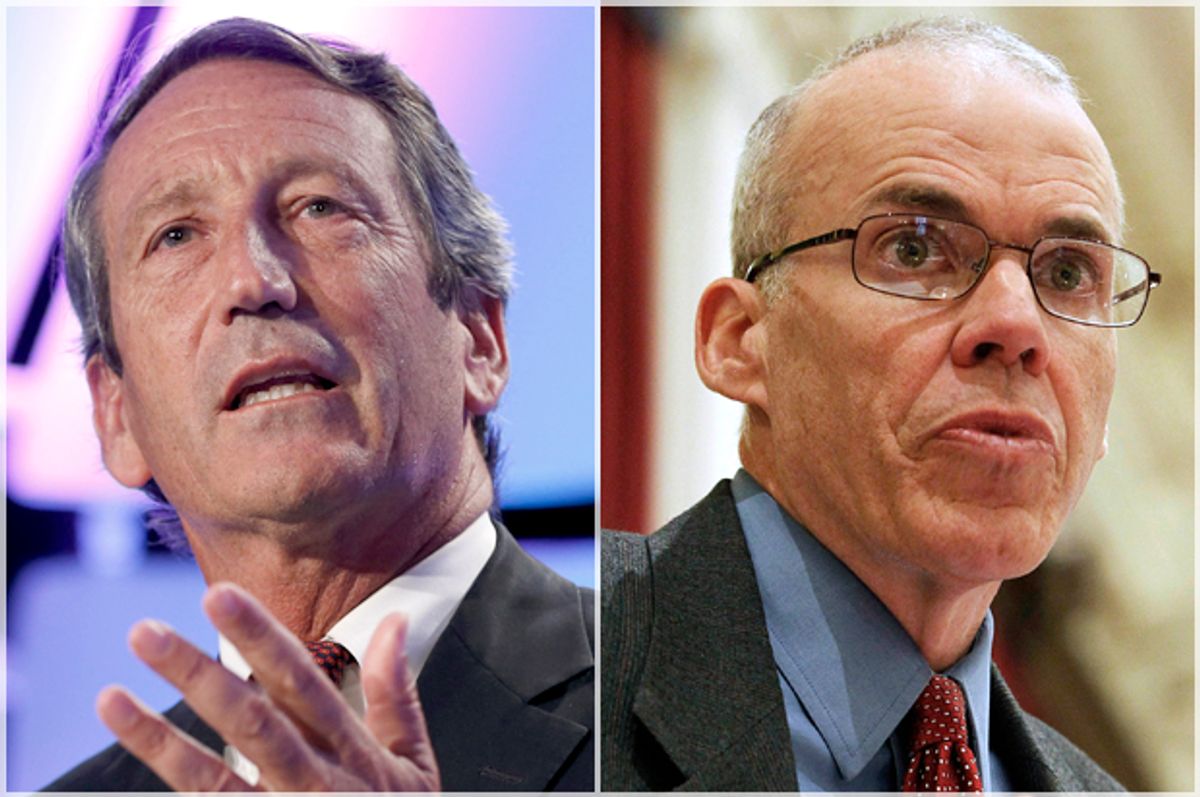 So what do conservative Reps. Curt Clawson of Florida and Mark Sanford of South Carolina, liberal Rep. Sam Farr of California, climate activist Bill McKibben, a former petroleum engineer, an evangelical minister and a surfer all have in common? No, it’s not a joke.  They all spoke out against offshore oil and gas drilling at a press conference earlier this month for the newly formed Sea Party Coalition.  The Sea Party aims to make opposition to proposed offshore drilling a major issue in 2016.

President Obama’s decision two days later to cancel the Keystone XL pipeline after seven years of polarized debate, and the pushback it received, increases the likelihood that energy and the environment will play a prominent role in the upcoming election.

The president made his Keystone decision on a fossil-fuel project he inherited from his predecessor. It will likely be up to the next president to decide if the U.S. continues expanding the offshore oil and gas exploration that the Obama administration has proposed for both the Arctic Ocean (now on hold) and along the Atlantic coast.

Interestingly, the opposition to offshore drilling has a very different makeup than many past environmental battles. It’s as much about business, place and faith as it is traditional political alignments.

"I am proud to be a part of the growing Sea Party. As an Evangelical Christian my biblical faith teaches me that God cares for his creation, so we should too,” said Virginia’s Rev. Richard Cizik, president of the New Evangelical Partnership for the Common Good. “I urge all candidates, from both sides of the aisle, to take a position on offshore drilling. It is a compelling challenge to the protection of our state's coastline.”

The Sea Party’s press conference took place outside the U.S. Capitol next to an 85-foot life-size blue whale representing seas free of oil spills. To date the Sea Party includes some 65 organizations ranging from environmental groups like the Sierra Club and Greenpeace to commercial fishing groups, aquaculture, surfers and small businesses.

The nature of the movement -- coastal versus statehouse, Republicans and Democrats aligned on both sides -- may also have unpredictable impacts on states slated for offshore drilling such as Florida, Virginia and South Carolina, increasing the likelihood that the presidential candidates will have to take a position in 2016.

Every coastal town and city in South Carolina, for example, arguably one of the most conservative states in the union, has passed resolutions against offshore oil surveying and drilling.

Rep. Mark Sanford, whose district includes much of South Carolina’s coast, told the Sea Party gathering, “It’s important that people get their voices heard. Think about all the towns and hamlets in South Carolina coming together as communities to say this is not a good idea. What we’re really talking about is upholding the democratic tradition our founding fathers gave us 200 years ago.” After the press conference South Carolina’s largest newspaper, Charleston’s Courier and Post, ran a column titled "Mark Sanford From Tea Party to Sea Party," noting how elements of the left and right are working together to stop the drilling.

Sanford complimented Peg Howell of Pawleys Island, South Carolina, at the press conference. Howell is a former petroleum engineer who was once a supervising  “Company Man” on Chevron rigs in the Gulf of Mexico.  “Working on a drilling rig is one of the riskiest things I’ve done in my life and drilling is done by some of the most highly trained personnel in the world,” she explained. “But people make mistakes and spills happen -- not only on the rigs, but also from on-shore processing facilities, pipelines, tankers and rail cars.”  She went on to warn that the economic benefits of drilling being promoted by the oil industry are vastly overrated, especially given the risk drilling poses to existing coastal businesses.

“People come to Monterey to see whales, not oil rigs,” Rep. Sam Farr of Monterey, California, agreed.  “We’re the whale-watching capital of the world. People are making billions of dollars [in tourism] and the tourist dollar is a sustainable dollar, where the high-risk low gain oil dollar is not.  Now we’re here in Washington, D.C., starting this new movement, the Sea Party. I’m a member and I say expanding offshore drilling will only increase the number of spills and increase our dependence on fossil fuels. We can’t drill and spill our way to a healthy ocean and the blue economy that it supports.”

From across the aisle Rep. Curt Clawson, who represents another coastal district on Florida’s Gulf of Mexico, sounded a similar refrain, “I love the ocean, I love the Gulf and I want to conserve it ... which includes stopping drilling in the Gulf.  Fish don’t like oil spills and neither do I.”

Clawson, one of the most conservative members of the House, then told a reporter from the News Press, a newspaper covering Southwest Florida, that, “There’s an intersection with economic health and growth. It’s an ecology issue, a lifestyle issue and an economic issue.  Destroying the Gulf is not good on any level.”

Others among the Sea Party speakers included Bill McKibben, a key leader in the battle against the Keystone pipeline, a sea turtle rehabilitator from North Carolina, a spokesman from the Great Whale Conservancy, an acoustics expert from California who played whale vocalizations while explaining the risk to marine wildlife from loud and repetitive noise generated by oil industry acoustic survey ships, and environmental and ocean directors for Greenpeace, the Surfrider Foundation and the Ocean Foundation.

In 2016 the Sea Party plans to focus its attention on southeastern states between Delaware and Florida where new federal oil leases have been proposed while also taking its message national. Its aim will be to grow the anti-offshore oil drilling opposition, promote clean renewable energy and do voter education on ocean conservation, “to restore the blue in our red, white and blue.”

David Helvarg is an author and executive director of Blue Frontier (www.bluefront.org), an ocean conservation and policy group and member of the Sea Party Coalition.