Obama sees himself as a "Tyrion," even if the GOP considers him a "Littlefinger" 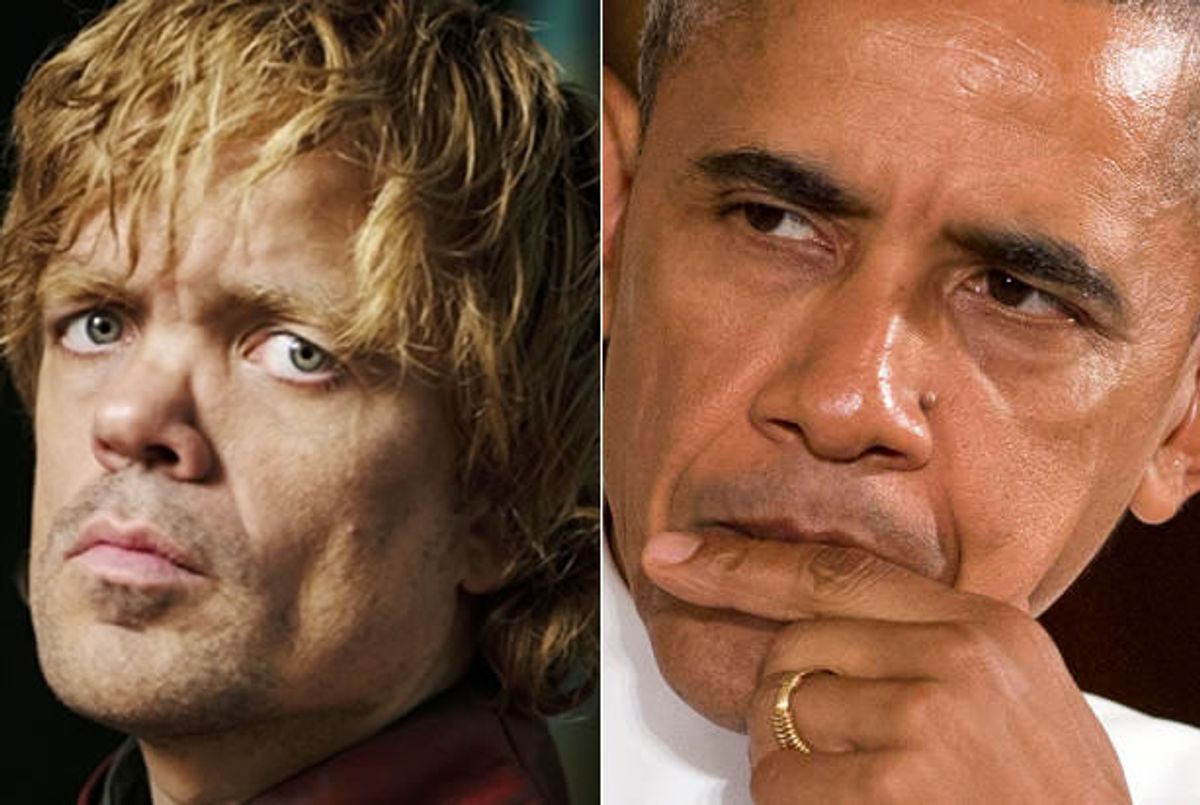 In a wide-ranging interview with Bill Simmons -- founder of the late, lamented "Grantland" -- President Barack Obama admitted, among other things, that while those on the right see him as a consummate "Littlefinger," when he watches "Game of Thrones," he identifies with "Tyrion Lannister." (Even if he can't remember the character's name.)

"My favorite character is probably the dwarf, what’s his name?" the president said, before noting that the "problem with 'Game of Thrones,' though, is that I don’t remember the names of any of the characters."

"I remember the characters, so when I watch it, I know exactly what’s going on. But if you read a review of the show afterwards and they’re mentioning such and such, the only one I remember is Jon Snow, because I can pronounce Jon Snow."

Simmons asked "which 'Game of Thrones' character is Donald Trump," to which Obama replied "I don't think any of them rise to that level." Given the ambiguity of that response, it would have been nice if Simmons had asked a follow-up along the lines of "that level of what," but alas, they moved back into the real world, in which the president confessed that he "would've enjoyed campaigning against Trump."

The president also discussed his legacy on issues like immigration reform and gun control, noting that after his re-election in 2012, he wanted to focus on the former, but the tragedy of Sandy Hook forced him to redirect his attentions to the latter.

"Our goal was to lead with a big push on immigration reform," Obama said. "And then, before the second inauguration has even happened, Sandy Hook happens. Which remains, by the way, the worst few days of my presidency."

"Right away, our focus had to shift to 'Is there a way for us to capture this moment to see if we can get over this incredible hump to try to put in place some common-sense gun-safety rules?' And we knew it was a stretch, just because of the politics of Congress and the NRA. But we had to try."

Obama also discussed how little appreciation he had for just "how decentralized power is in this system." He told Simmons that "[w]hen you’re in the seat and you’re seeing the housing market collapse and you are seeing unemployment skyrocketing and you have a sense of what the right thing to do is, then you realize, 'Okay, not only do I have to persuade my own party, not only do I have to prevent the other party from blocking what the right thing to do is, but now I can anticipate this lawsuit, this lobbying taking place, and this federal agency that technically is independent, so I can’t tell them what to do. I’ve got the Federal Reserve, and I’m hoping that they do the right thing—and by the way, since the economy now is global, I’ve got to make sure that the Europeans, the Asians, the Chinese, everybody is on board.'"

Read the entire interview with Bill Simmons at GQ...