The selective outrage over a dead French dog, but not people, is yet another sign that we have lost our humanity 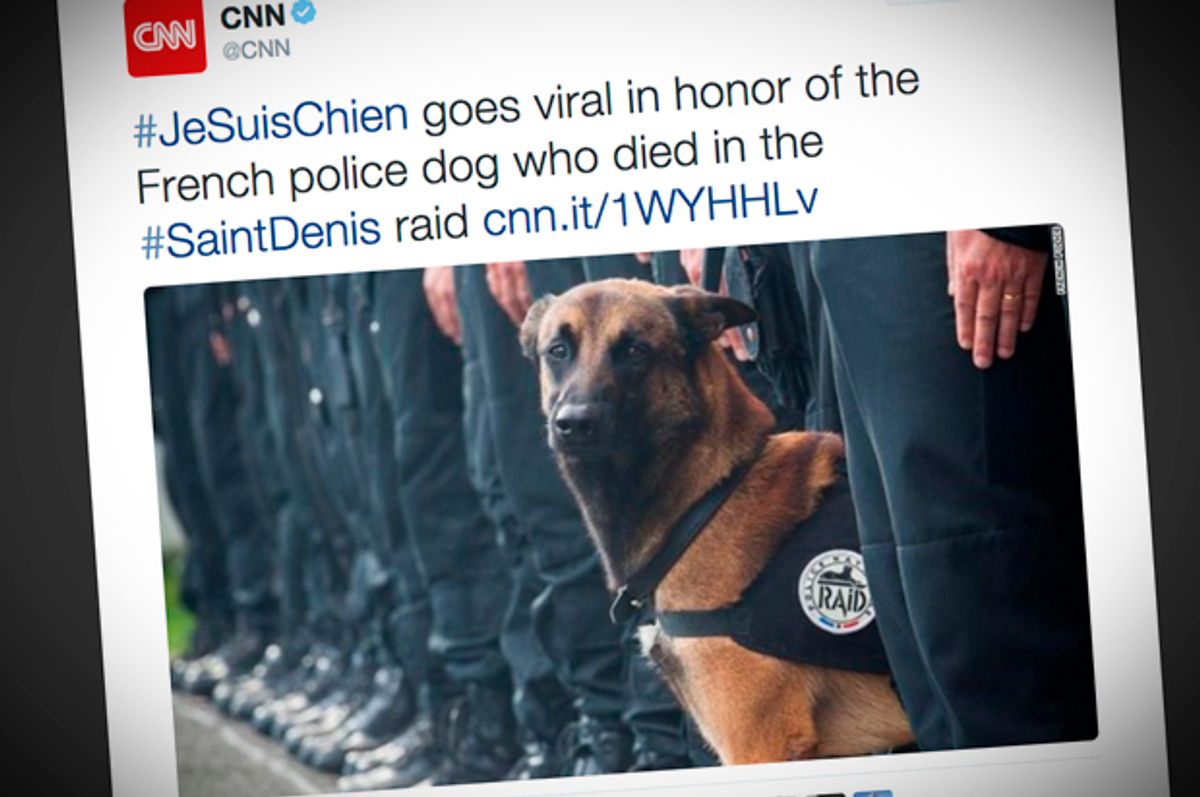 I can think of no symbol of the West's obscene moral depravity more troubling than #JeSuisChien.

A French police dog died in a raid on an apartment of extremists in Saint-Denis, a Paris suburb. Messages of sympathy for the deceased canine flooded social media. "Je suis chien" (which means "I am dog" in French) went viral -- a play off of the "Je suis Charlie" slogan that went viral in the wake of the January Paris attacks.

Western outrage is entirely selective. Westerners only mourn certain victims -- the white ones, the rich ones, the ones who don't have "funny-sounding" names or long beards or too much melanin in their skin.

More press coverage has been given to a dead French police dog than to many thousands of dead humans around the world.

We now even know the name of the dog, Diesel, but not the names of the people who once had families, and friends, and lives.

Just in the past few months, numerous horrific massacres were glossed over by Western audiences. I addressed the West's terrorism double standards in the wake of the Friday, November 13 terrorist attacks, detailing several other massacres that did not get hip hashtags or trendy social media campaigns.

24/7 news coverage was not devoted to these horrific tragedies. The White House did not interrupt every news broadcast to publicly condemn these heinous attacks. These victims' deaths did not go viral on social media.

Where is the solidarity with these unjustly murdered fellow human beings? There is none, because solidarity is reserved solely for white Westerners -- and their dead dogs.

And it's not even just victims abroad. Many of the same white Americans going berserk over a dead dog say nothing when their government's racist police harass, imprison, and gun down innocent black citizens.

The U.S.'s own white supremacist institutions place greater value on dogs than they place on black lives. Black football player Michael Vick served more time in prison (21 months) for killing dogs than white cop Johannes Mehserle served (11 months) for shooting innocent unarmed black 22-year-old Oscar Grant to death while he was handcuffed and lying face down on the ground in 2009. #JeSuisChien is just another sign of how the West's sadistic racism has become a twisted mockery of itself. A few months ago, we saw another, similar sign.

In July, when an American dentist and hunting aficionado killed "Cecil the Lion," it was all over the news, everywhere, in every headline. I criticized the reaction of the media and public at the time. "U.S. citizens and the U.S. corporate media absolutely freak out over the death of a lion, but barely blink when their government massacres civilians in war," I said.

Where was the public outrage over the one million Iraqis killed in Iraq in the first 12 years of U.S.-led "War on Terror"? I asked. Where was the public lamentation for the quarter of a million Afghans who lost their lives? Or for the thousands killed in the brutal U.S.-backed, Saudi-led bombing of Yemen? Or for the slaughter of more than 2,200 Palestinians, the vast majority of whom were civilians, in Israel's summer 2014 war on Gaza, which the U.S. wholeheartedly backed?

"The U.S. corporate media and American culture anthropomorphize animals killed by dentists and dehumanize humans killed by empire," I wrote in July. Change a few words in the line, and the same holds true today.

"Most Americans did not even know Cecil the Lion existed during its life, but they now mourn it in its death," I added. I was lambasted by the outraged, told that the enormous public backlash was based on the fact that a rich white Westerner paid tens of thousands of dollars to travel to Africa to destroy a rare animal for fun, not based on the fact that a lion was killed.

Yet #JeSuisChien proves my point. At the end of the day, Westerners do care more about dead dogs than dead humans from the "wrong" part of the planet. They have come to no longer see the victims of terror outside of the West (and especially the victims of their own governments' terror) as fully human -- and, in doing so, they have lost their humanity.

In an interview with Al Jazeera in February 2014, Cornel West declared:

"It's always worthwhile to engage in the quest for truth, understanding, that the condition of truth is to allow suffering to speak, that a baby in every corner of the globe — be it in Tel Aviv or be it on the West Bank, a baby in Yemen, Somalia, Pakistan or Newtown, Conn., or a baby in South Side Chicago, Koreatown, brown barrio, Indian reservation — they all have the same value. And that's not just empty rhetoric. It means that you're fundamentally committed to the decency and the humanity of each and every person, at least potentially. Each human being has a potential to be decent, has a potential to have integrity, has a potential to be honest. And it means you cut radically against the grain, because we live in an age of monstrous mendacity."

Prof. West's words may sound elementary and commonsensical, yet today -- in a world in which U.S. presidential candidates, with rhetoric that might as well have been directly lifted from Nazi demagogues in the 1930s, say they will only allow in refugees of certain religions, and will turn away orphans -- they are increasingly radical.

We live in a world in which the idea that human beings, regardless of where they are born, are equally valuable is truly believed only be few in the West -- and actually acted upon by even fewer.

#JeSuisChien is yet another sign that we have lost, or rather forfeited, our humanity.