The GOP's magnificent post-Paris breakdown: Guns, religion & an ideology that has completely gone off the rails

Conservatives have gone nuclear in the days since the Paris attacks, doubling down on their incoherent agenda 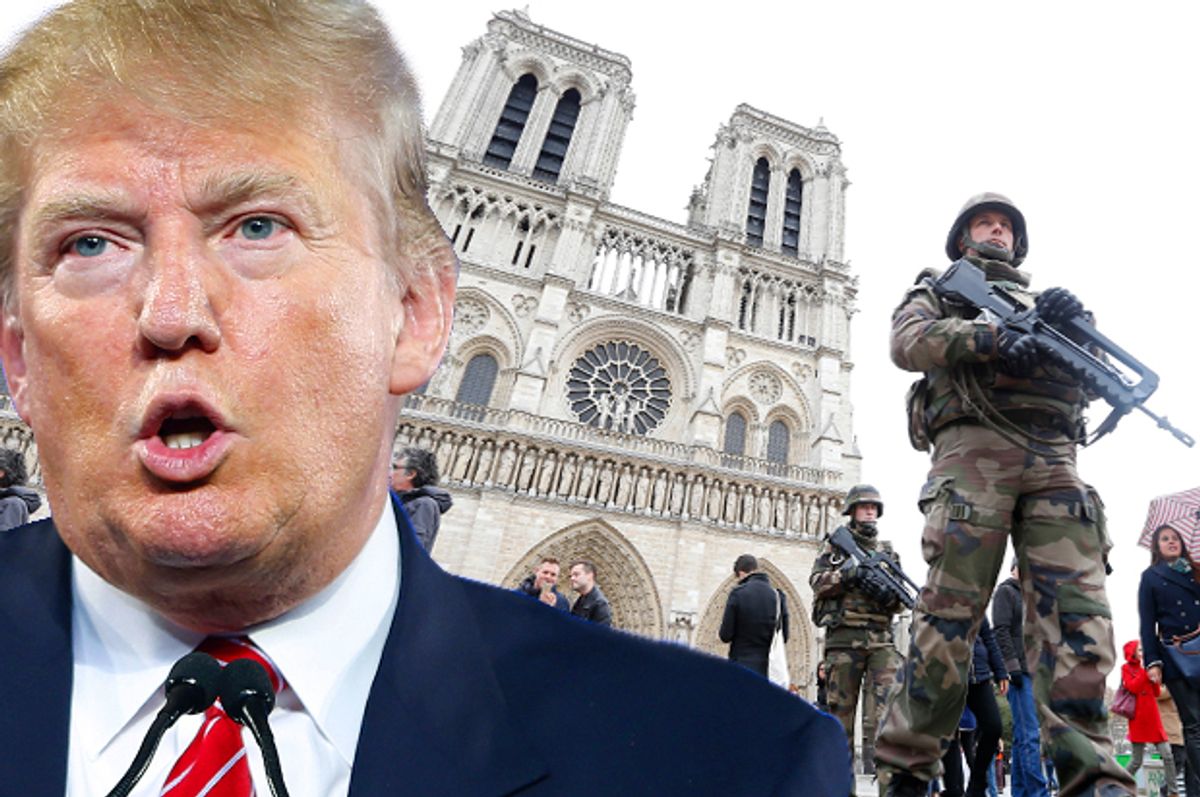 Last week, the biggest story in conservative circles had to do with Starbucks' decision to issue coffee cups in plain red and green holiday colors rather than festooning them with Christmas-based imagery. This week, conservatives are howling over the potential for Syrian refugees to be granted entry into the United States.

There's an idea floating around social media that perfectly illustrates how these two stories correlate: Odd how the GOP was so enraged by Starbucks cups that excluded the religious significance of Christmas -- a holiday founded on the story of refugees looking for shelter -- and yet they don't mind denying a "room at the inn" for countless other Middle East families. So much for the religious significance of Christmas when there's inchoate fear to indulge!

The story of Mary, Joseph and the birth of Jesus aside, there are at least seven biblical verses that implore Christians to accept refugees with open arms. (Not for nothing, but that'd be more verses than the ones forbidding gay sex.)

In no particular order (via):

• Luke 3:11. John the Baptist: “Anyone who has two shirts should share with the one who has none, and anyone who has food should do the same.”

• Matthew 25:35-40. "35: For I was hungry and you gave me something to eat, I was thirsty and you gave me something to drink, I was a stranger and you invited me in. 36: I needed clothes and you clothed me, I was sick and you looked after me, I was in prison and you came to visit me. 37: Then the righteous will answer him, ‘Lord, when did we see you hungry and feed you, or thirsty and give you something to drink? 38: When did we see you a stranger and invite you in, or needing clothes and clothe you? 39 When did we see you sick or in prison and go to visit you? [...] 40: The King will reply, ‘Truly I tell you, whatever you did for one of the least of these brothers and sisters of mine, you did for me."

• James 2:14-17. "14: What good is it, my brothers and sisters, if someone claims to have faith but has no deeds? Can such faith save them? 15 Suppose a brother or a sister is without clothes and daily food. 16: If one of you says to them, “Go in peace; keep warm and well fed,” but does nothing about their physical needs, what good is it? 17: In the same way, faith by itself, if it is not accompanied by action, is dead."

• 1 John 3:17. "If anyone has material possessions and sees a brother or sister in need but has no pity on them, how can the love of God be in that person?"

• Philippians 2:3-4. "3: Do nothing out of selfish ambition or vain conceit. Rather, in humility value others above yourselves, 4: not looking to your own interests but each of you to the interests of the others."

But Starbucks is evil and must be punished for not being biblical enough? That's rich.

So, yes, in the wake of the terrorist attacks in Paris, Republicans are further entrenching against admitting refugees into the U.S. because there might -- might! -- be an ISIS terrorist disguising himself as a Syrian escaping his nation's civil war.

It's yet another example of how the GOP almost always drops the ball when it comes to serious solutions to complicated problems. Let's review:

• Spectacular al-Qaida attacks using airplanes crashing into buildings? Invade and occupy Iraq, even though al-Qaida didn't operate there -- although they sure have done so since the invasion -- postwar -- and even though Saddam Hussein had nothing to do with 9/11.

Of course we learned that governors don't have the authority to ban refugees from their states. In other words, states have no authority over the federal government when it comes to immigration policy. The Supreme Court ruled in Hines v. Davidowitz: “The supremacy of the national power in the general field of foreign affairs, including power over immigration, naturalization and deportation, is made clear by the Constitution.” Also, according to ThinkProgress, the Refugee Act of 1980 grants President Obama the authority to admit refugees who face “persecution or a well-founded fear of persecution on account of race, religion, nationality, membership in a particular social group, or political opinion.”

Then again, the GOP is increasingly ruled by states' rights zealots who routinely posture about ignoring Supreme Court rulings such as the one legalizing same-sex marriage, so it'll come as no surprise to see Bobby Jindal and Greg Abbott inveighing against admitting refugees, given the opportunity.

It clearly doesn't matter to the GOP that most if not all of the ISIS terrorists who attacked Paris were European nationals and not Syrian refugees.

The GOP is obviously pandering to the racist tendencies of its base. Like always. And those tendencies demand validation. If the yokels believe the Syrian refugees are harboring ISIS sleeper cells, then they clearly are. Facts be damned.

And while Republicans from Donald Trump to AM radio screechers market in the specious connection between incidents of gun violence or terrorism and locations with strict gun laws, it's worth noting that between 2004 and 2014, 2,000 terrorists from the FBI's watch list were able to successfully purchase firearms in the United States, thanks to the GOP and its salacious love affair with the National Rifle Association.

However, a Republican lawmaker from Texas brought us perhaps the most twisted bastardization of reality. Rep. Tony Dale (R) strongly opposes allowing refugees into his state. Why? Because it's too easy to buy guns there.

“While the Paris attackers used suicide vests and grenades,” Dale wrote, “it is clear that firearms also killed a large number of innocent victims. Can you imagine a scenario were [sic] a refugees [sic] is admitted to the United States, is provided with federal cash payments and other assistance, obtains a drivers license and purchases a weapon and executes an attack?” He urged the lawmakers to “do whatever you can to stop the [Syrian refugee] program.”

Dale plainly didn't think this one through. So, fine, the refugees can't settle in Texas and potentially buy guns to attack U.S. targets. Fine. But what about any other would-be terrorists? Texas welcomes you. Thanks, Rep. Dale, for telegraphing Texas' easy availability of firearms to any terrorist who wants them. Smart. By the way, according to a study by the New America Foundation, most terrorists inside the U.S. are white Americans.

Thanks to Dale's state of Texas, those white Americans have access to all the guns they want.

None of this is to suggest the threat from ISIS should be taken lightly. I tend to agree with Bernie Sanders, who opened his remarks in the most recent Democratic debate by pledging, "Together, leading the world, this country will rid our planet of this barbarous organization called ISIS." Naturally, there's a smart way to pursue this goal, and there's a really dumb, scattershot way of doing it. The GOP is busily showing us the latter by randomly demonizing innocent Syrian refugees, even though 51 percent are children under 17. Someone should find out how many unborn Syrians are among the refugees. Surely if most of the refugees were fetuses under the age of 17 weeks, the GOP would stumble over its own feet to rescue them. The birthed ones are, sadly, on their own.

If the circumstances surrounding Paris weren't so utterly tragic, the GOP's flailing, nonsensical reaction to the attack and to the ongoing refugee crisis would be almost as hilarious as its reaction to the stupid Starbucks cup design.