Stop mocking "safe spaces": What the Mizzou & Yale backlash is really about

People who mock "p.c. culture" are ignoring the racial recklessness—and lack of safety—suffered by people of color 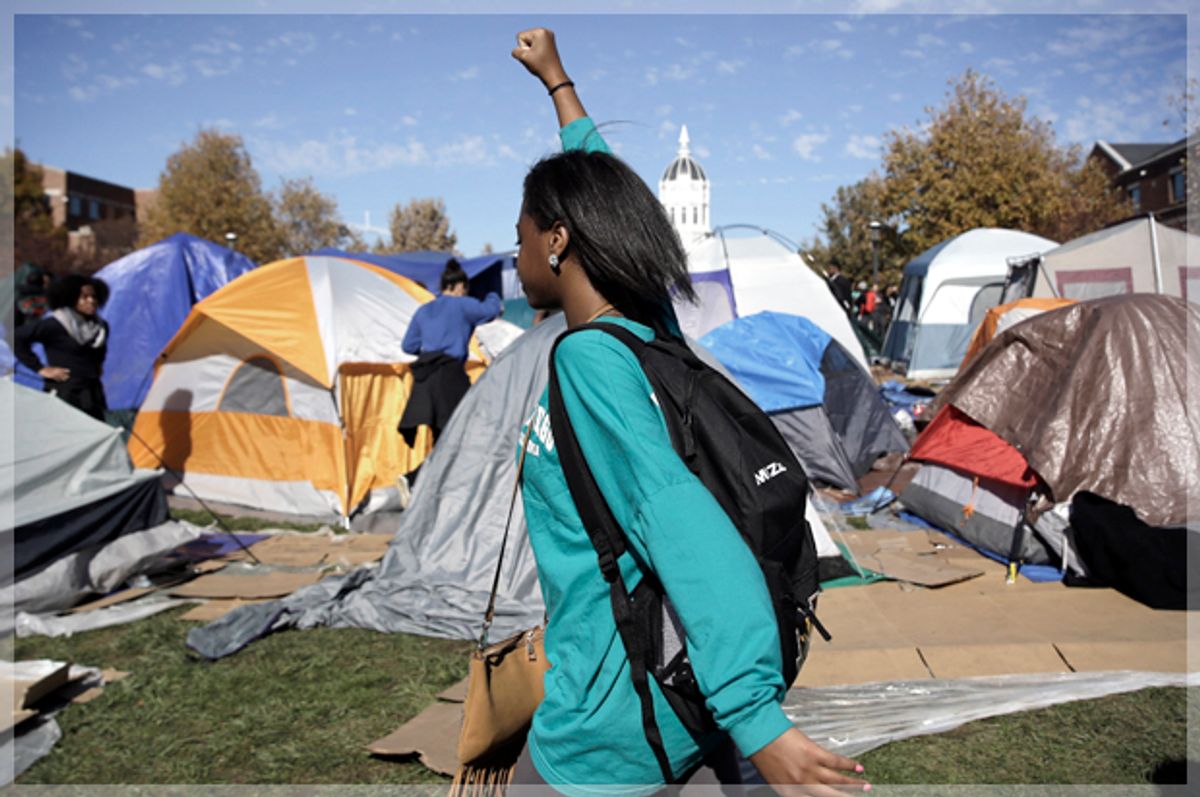 Recent student protests at Mizzou, Georgetown, Yale and other campuses across the country have reignited national conversations about whether the right to freedom of speech should be defended more than the right of students of color not to endure racially charged verbal harassment on college campuses. At Yale, much of this debate has pivoted around an administrative suggestion that students be mindful of the potential racial and cultural insensitivity of their choice in Halloween costumes. After Black students demanded that administrators be more responsive to their concerns, a group of people identifying themselves as “students, faculty, alumni, and other concerned citizens” formed a group called “The Committee for the Defense of Freedom at Yale.”

In an open letter to Yale University President Peter Salovey, the group argues that “speech panels that seek to punish, police, or preempt expression have no place at a university like Yale.” They also express great disdain for the audacity of students to make “demands,” writing that “ ‘Demands’ made of our president, in any case, are inappropriate and offensive.” (The writers of this petition clearly don’t see just how much they sound like their ancestors who balked at “uppity” Negroes who demanded to be treated with dignity.) Finally, they take great issue with the possibility that being forced to do any kind of diversity training “will force students into an environment where they are presumed to be ‘microaggressors’ and where those who hold different opinions will automatically be delegitimized as racist…”

The ability to fight for a more racially just society is predicated on the ability to name and confront the continued presence of racial injustice through public speech acts that bring attention to these issues. To suggest that the call for a limit to racially harassing language is an attempt to curtail freedom of speech is to grant legitimacy to a deliberate mischaracterization of the issue. Black students exercise their freedom of speech every time they call attention to the racially hostile conditions they face. I exercise my freedom of speech, the linchpin of what universities call “academic freedom,” every time I express unpopular racial opinions in the pages of this magazine. We all hold dear the freedom of expression.

The integrity of the U.S. Constitution, the very document that emboldens these anonymous defenders of “freedom,” has been secured through the bloodshed of enslaved and lynched Black people. There is no softer way to put it. We fought an entire war so that Black people could access the protections of the constitution. If the Constitution cannot guarantee the right of Black people to move through the world unharassed on the basis of skin color, then it is not worth the paper it was written on.

The suggestion that Black college students who ask not to be confronted with Blackface on Halloween or not to be called “nigger” as they walk through campus are somehow seeking to undercut the power and importance of the Bill of Rights evinces a poor understanding of American History. If the defense of freedom means always defending the right of white people to engage in racial recklessness at the expense of racial minorities, then perhaps we should consider whether freedom is the thing for which we are really fighting.

So these battles on college campuses remind us that white freedom is always prior to Black safety. When administrators use their considerable power on campus as Nicholas and Erika Christakis did at Yale to fight for the right of students to engage in racially offensive costumes, they did so strictly from the vantage point of making the campus hospitable to white students. These conversations about freedom of expression always take white students’ experiences as the zero-point of conversation. University policy and advocacy always begins by seeking to secure conditions that make white students feel most safe.

When the experiences of students of color drive discussions of safety, the conversation changes dramatically. Suddenly, considerations of faculty diversity, questions of policing tactics and approaches, and conversations about racial and cultural sensitivity begin to matter. And addressing these matters not only cost money but time and a commitment to vigilance against racism. Such questions and concerns force a confrontation yet again with a Constitution that was never written with the rights of Black people in mind. The securing of rights for Black people has always been a begrudging addendum to the American freedom project.

Those fraught histories show up in stark relief in these conversations about freedom. Most of us are not conceptually equipped to think about what it means to be vigorous defenders of free speech while also acknowledging how hate speech has done and continues to do untold amounts of harm and damage to people of color, especially Black people in the U.S.

Many who defend the right of white students to be racially offensive mistake the problem for one of discomfort. Discomfort, in most cases, does not in fact equate to encroaching on another person’s rights. By not being precise in our language, we open ourselves to defining the problem the wrong way. Moreover, in a world where discomfort is the benchmark for administrative or state-based intervention, then privileged students who are discomfited by discussions of their privilege falsely equate their discomfort with the actual unsafety of students who have endured homophobic, anti-Semitic, or antiblack slurs on campus.

I don’t have easy answers to these questions. America does not have a one-size-fits-all definition of freedom. Many of us ally ourselves under the banner of constitutional promise, but these schisms remind us just how tortured these solidarities are. The Constitution doesn’t love all of us. Black people are a constitutional afterthought, an unplanned birth in a nation without the resources or wherewithal to welcome us into the fold. I know for the liberal-minded this is a hard truth to stomach. But justice, as opposed to liberalism, demands a distinction. I do know that the right of Black students to move around on campuses free of hate speech and overt racial antagonism has to matter as much as everyone’s right to freedom of expression. I do know that discomfort and unsafety are not the same thing.

Thus as I have grappled this week with what freedom means to Black people, I return to one of the theorists who has been most influential to my own thinking. Anna Julia Cooper famously wrote in 1892, “When and where I enter in the quiet, undisputed dignity of my womanhood, without violence and without suing or special patronage, then and there the whole Negro race enters with me.” These conditions marked Black freedom in Cooper’s estimation: moving through the world with undisputed dignity, without violence enacted upon one’s person, and without needing to sue for inclusion or know somebody with power to be treated like a person who matters. When students at Mizzou demanded “safe space,” on campus, this is what they meant. This is what they demanded. Yes, many white people perceived these “demands,” as the Yale committee said, to be “inappropriate” and “offensive.” But dignity, by its very nature, is always a demand, never a request.

The Constitution has enshrined within American democracy the foundational principle that white freedom is always prior to black safety and white rights are always prior to black freedom. To defend freedom of expression without thinking through these histories, and to accuse Black students of attempting to take rights from white students as though they actually have the institutional power to do such a thing, is a gross distortion of the facts.

It is incumbent upon us to reject these facile conversations about freedom and do the hard work of figuring out how we can secure a robust democracy with lively public discourse without endangering and harming students of color on predominantly white campuses. But to do so, we would have to acknowledge that words and language have power. In my faith tradition, our creation myth pivots on the notion that words create worlds. We frequently say to each other, “life and death is in the power of the tongue.” Words, like Black lives, matter.