"What's next? Hotties of the Holocaust?": Even Daily Caller's own readers agree the "Syria-sly hot" refugee list is disgusting

The right-wing site trivializes the danger and trauma refugees endure 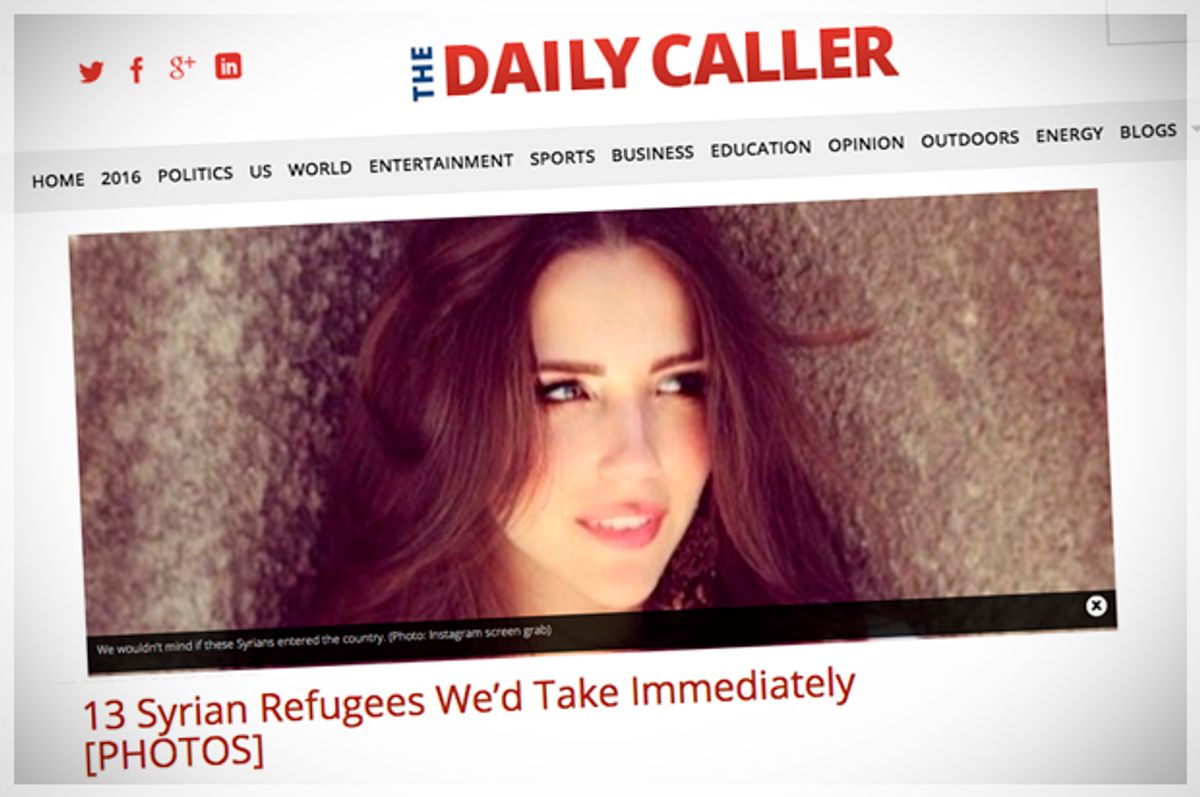 For those of us who spend a probably unhealthy amount of time consuming news and social media, the time prior to an election, the days during a congressional hearing and aftermath of an act of mass violence are always fraught with awful, awful commentary. And some days, you'd like to just get the facts of a developing situation without the wading through the inevitable "worst possible reaction" angle. But it's there anyway. So on Wednesday,  just as quickly a brief spark of humanity dignity flickered across social media with the news that French President Francois Hollande reiterated his nation's commitment to accept 30,000 refugees over the next two years, citing "humanitarian duty," elsewhere, the Daily Caller was finding new depths to sink.

In the Tucker Carlson-led site's ongoing bid not to just be a repugnant parody of a news site but a gross parody of Maxim, the Caller somehow decided it'd be a good idea to run a slideshow of "13 Syrian Refugees We’d Take Immediately." And the rest of us all have to live in a world where crap like this exists. "Written" by entertainment editor Kaitlan Collins and hot on the heels of her big "Emily Ratajkowski’s Underwear Doesn’t Match [PHOTOS]" scoop and "These 8 Celebrities Had Sex Romps With Their Nannies [SLIDESHOW]," Collins noted that "While a growing list of governors are claiming they won’t allow Syrian refugees to enter their states, we think these women might make them change their minds." She even managed to throw in a pun, saying, "They are Syria-sly hot." Way to go, there, pulling one- and two year-old images from a "Syrian Girls Got Beauty" Instagram account intended "to show the rest of world the beauty of our queens" and turning it into a bizarre commentary on the refugee crisis.

How ill-conceived was this apparent NO FAT CHICKS plea for a U.S. response to the crisis of Syria's people? I could tell you what I think, but hey, I'm just a shrill, pro-abortion feminist who believes that a vast number of people living in America today got here because they or their ancestors were trying to get away from someplace else. What do I know? I could cite Ana Marie Cox's astute observation that "Haha: female refugees are at high risk of sexual assault! Funny because it’s true!" But she's just a lady too.

Instead, why don't I tell you what some of the commenters — that's right, Internet commenters, on the Daily Caller, no less — thought. "What's next? Hotties of the Holocaust?" asked one reader, while another wondered, "HOLY **** - are there no editors at the Daily Caller? Who thought this was a good idea???" Another wrote, "Congratulations on turning world turmoil and suffering in to a punchline. Maybe you can dig back to genocidal moments throughout modern history and find archived pictures of hot people we wouldn't have kicked out of bed for eating crackers. Or better yet, maybe we can replace the poem on the Statue of Liberty to simply read, 'If you're ugly...Don't bother.'" Let's put it this way, a user who goes by the nickname StampOutLiberals opined, "Not really a joking matter. I am getting less and less enthused with The Daily Caller." Thanks, StampOutLiberals.

Naturally there was plenty of racist commentary as well, but I've got to say, way to alienate even Daily Caller readers, there. It's so pathetic that I'm going to perform a public service and make this easy, so easy even someone who covers the Emily Ratajkowski underwear beat can understand. First, just because a woman is Syrian does not mean she is need of asylum. You don't get to call these women "refugees" when all you know about them is their heritage. Second, turning a crisis of global proportions into a lesson in objectification is not just offensive it's actually dumb. And finally, the Daily Caller is a bottomless toilet full of flaming garbage that makes the world a worse place merely by existing. I think that about covers it. Srsly.