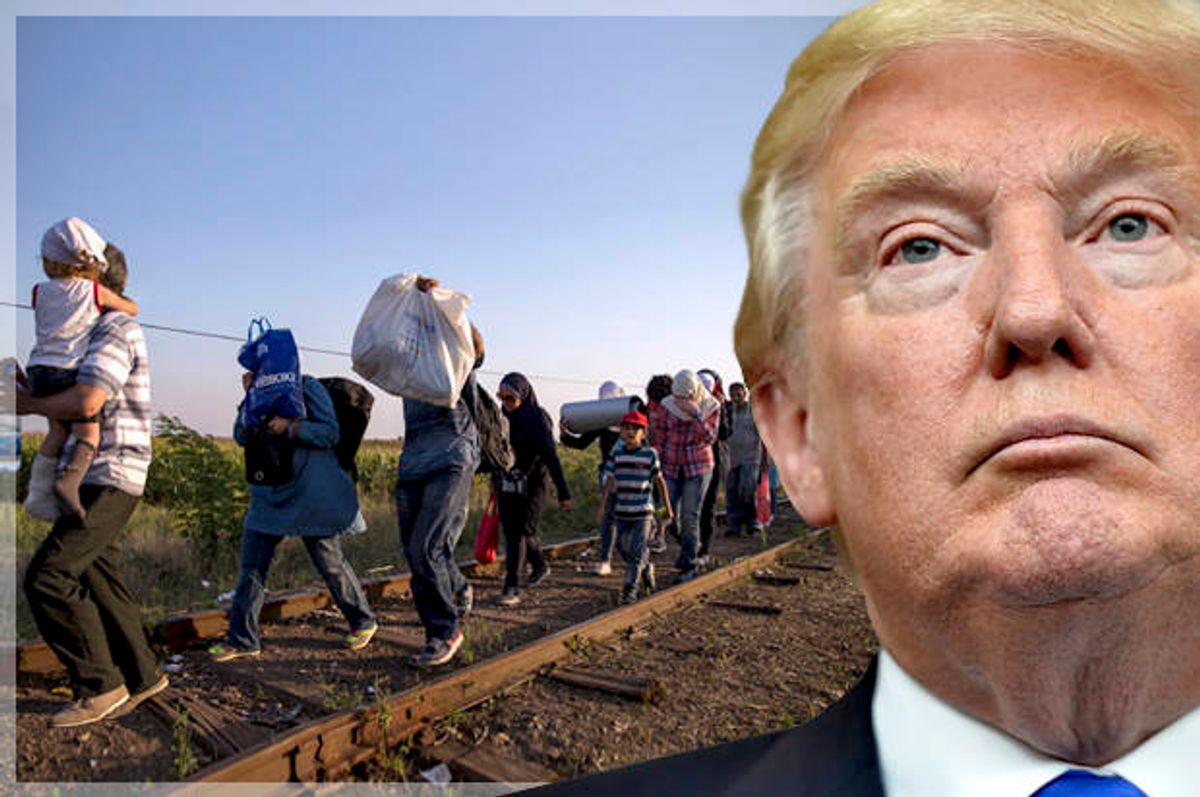 Dangerous times always favor the demagogues. People are worried, legitimately, about the very real threats we’re facing. And their anxiety and angst is easily exploited by fear-mongering politicians. Which is why we need adults in positions of responsibility, people who can talk honestly but soberly about our circumstances.

But Republican voters aren’t interested in adults right now, and a glance at the polls proves it.

Donald Trump may not be a fascist, but he’s pretending to be one on T.V. His nativist shtick was already working, but after the Paris attacks, it’s becoming more alarming and, sadly, more effective.

A post-Paris poll of GOP voters in New Hampshire shows that Trump’s support has increased by 4 points in the last three weeks. And a broader Reuters poll conducted on Tuesday asked voters which candidate was best-suited to deal with the problem of terrorism, and 36 percent answered Trump. (The second most popular response was “none,” at 17 percent).

These numbers are troubling. Trump has starting ratcheting up his rhetoric, and even by Trump’s standards, it’s frightening. He released an ad this week in Iowa, which used the Paris attacks as campaign fodder. “The tragic attacks prove once again that America needs to get tough on radical Islamic terrorism,” the ad begins. “Obama has no strategy to defeat ISIS, and now he’s prepared to let hundreds of thousands of refugees from Syria into the United States…I’ll stop illegal immigration, we’ll build a wall on the Southern border, and yes, I’ll also quickly and decisively bomb the hell out of ISIS.”

There’s nothing outrageously offensive or new here, apart from the implication that Syrian refugees and ISIS terrorists are indistinguishable. Otherwise this is more or less the kind of nationalist garbage you hear from Trump all the time – we’ll build a wall, we’ll keep the brown people out, and we’ll bomb our enemies into nonexistence. (Bombing the hell out of ISIS isn’t a strategy either, but strategic thought isn’t Trump’s forte.)

But Trump has taken it to a new and dangerous level. In a recent interview with Yahoo, he goes full fascist in his response to the terror threat. “We’re going to have to do things that we never did before…Some people are going to be upset about it, but I think that now everybody is feeling that security is going to rule,” Trump said.

The ambiguity of this language should give everyone pause. What “things” have we never done before that we now have to do? We’ve done some pretty heinous things in the name of security before, like torturing innocents and interning Japanese Americans during WWII – what lies beyond that?

A lot of us, myself included, have enjoyed the spectacle that is Donald Trump. He’s a blowhard and an entitled infant, and his blend of ignorance and confidence is never short of entertaining, but initially no one thought he could be president. He was supposed to dominate headlines for a month or two, and then moonwalk into his next reality TV show.

But things changed. Trump has tapped into a latent but powerful fascist streak in the American psyche, and what he says now matters a great deal. To the extent that people take him seriously (and, regrettably, many do), his words have real power. Whatever game he’s playing, whatever he means by his inane “Make America Great Again” slogan, his stunt has taken on a new meaning, and it’s led us to a dark place.

Trump’s latest comments are just vague enough to mean anything to anyone. To a xenophobic base already primed to fear Muslims, his remarks sound like a blank check, an open invitation to intern and surveil and punish Muslim Americans. And you can be sure that’s how his core constituency will interpret them.

I don’t believe for a second that Trump has thought any of this through. He hasn’t considered that we have a war of ideas to win, or that most Muslims are our allies. He hasn’t considered how counterproductive it is to alienate the entire Muslim community, whose support we need now more than ever. He doesn’t care about the constitution or religious freedom (most conservatives only care about the religious freedom of Christians) or about the need to resist retaliatory violence against innocent Muslim Americans.

Trump cares about Trump. He’s saying what’s easy right now, what plays well with a scared base. And he can do that because he’s not responsible for solving any of our problems. But this kind of rhetoric borders on criminally reckless, and it’s likely to whip people into a further frenzy, which is the last thing we need.