Your #OscarsSoWhite preview: What the blindingly-white Hollywood Reporter actress roundtable says about the 2016 Academy Awards 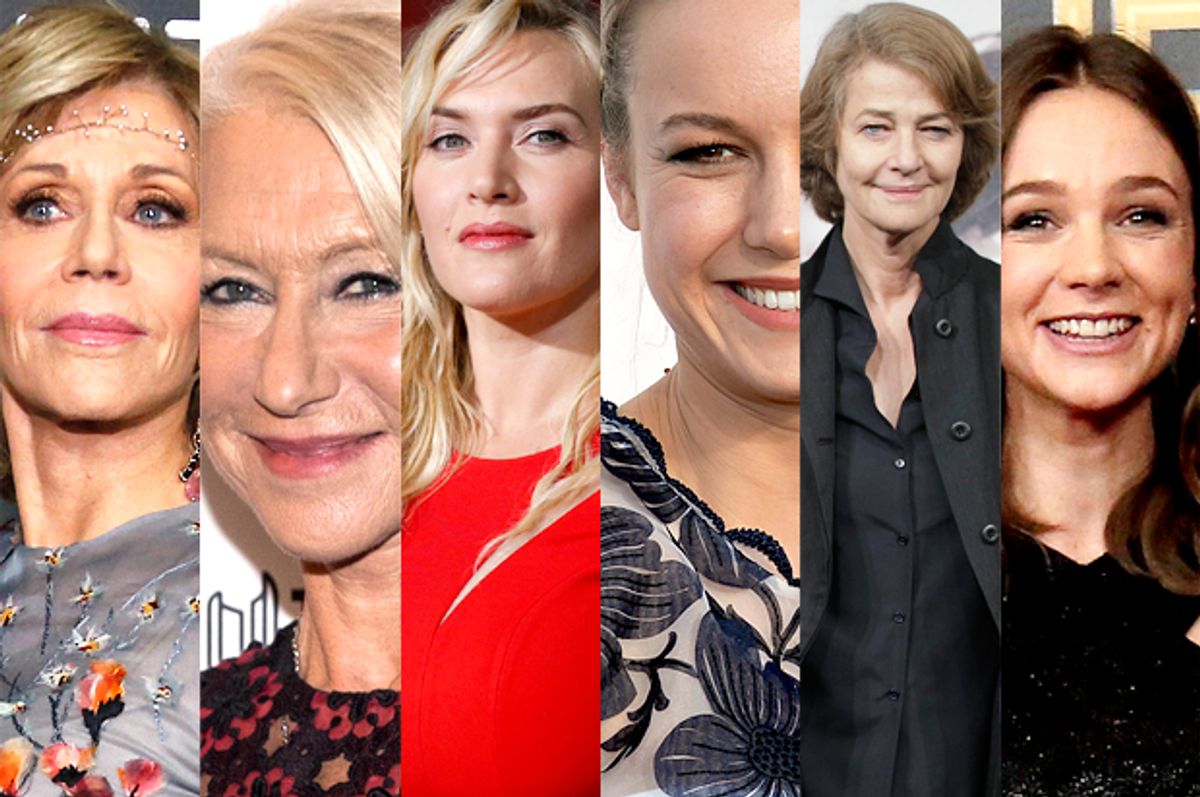 Twitter was having none of it, and neither was writer/editor Ijeoma Oluo. In a withering, hilarious response for The Establishment, she called out Galloway's posture for exactly what it was: the public performance of white guilt, a performance he hoped would be convincing enough to absolve him of blame. Skeptically, Oluo points out the obvious flaws in his very good plan:

"Galloway isn’t going to, say, fix the situation by including brown actresses in the roundtable. He can’t, see—because this year, there just aren’t any. Poof—they vanished. Now, two years ago, there were brown actresses—THREE OF THEM! Nobody knows where they went, but The Hollywood Reporter’s brave decision to include these three brown actresses in the past should be noted and applauded before we get upset about this year’s complete absence of color. And remember, we shouldn’t get upset anyway, because The Hollywood Reporter is already upset for us. So very upset."

There are two separate issues at play here. The first is Galloway's weak attempt to wash his own hands of responsibility, while mumbling on about being just a mirror of the industry. He insists that he does not determine who makes the cover. No, the selections are made as a result of an amorphous collective group determining who is in contention for the big film awards this season.

Which brings us to the second issue: "Hollywood" understood not as a place but a film system producing mass-marketed artifacts valued as entertainment, a system ever more clearly working more to sustain itself as an institution than to stay culturally relevant.

In an attempt to position himself as a small cog driving a very large engine, he points to conversations and screenings producing  "buzz" that coalesces and swirls and eventually solidifies into names deemed worthy of awarding. And so we get to the nut of the matter. The Hollywood Reporter cover isn't about getting together an octavo of actresses for a girl talk. It's a preview of who's in contention for the big awards. Since all these stars are white...err, well. Galloway finally comes out and says the "awful truth":  it means "that there are no minority actresses in genuine contention for an Oscar this year."

He's hand-wringing in advance of the future storm coming, which will not be over his magazine's cover but the nominees for the Oscars. It takes no gifts of Cassandra to predict that it's headed for a repeat of last year's fiasco, which produced the hashtag #OscarsSoWhite and generated an avalanche of criticism, much of which focused on the snubbing of Ava DuVernay's "Selma."  This latest example of institutional whitewashing  also comes sharp on the heels of the "Gods of Egypt" casting outrage that recently flared up via social media. Despite ostensibly being about Ra, Horus, Set and other gods of ancient Egypt, the actors cast to play them were Gerard Butler, Geoffrey Rush and Jamie Lannister. In other words, not Egyptians. Not even brown-ish.

Yet on television there is not only "Black-ish" but "Fresh off the Boat," "Dr. Ken," and the most recent breakout hit, "Master of None" (this last being on Netflix, which is rapidly becoming the master of all media), not to mention dramas such as "Empire," and "Quantico." Heck, even "Fargo" has people of color and it's set in '70s Minnesota and North Dakota.

Shonda Rhimes (creator of "Grey's Anatomy," "Scandal," "How to Get Away With Murder") is one of the most powerful people in television, and she is the Goddess because she not only writes characters of color but then casts actors of color to play those roles. Which should not seem amazing, but given the strength of the whitewashing reflex in Hollywood, it apparently takes stones to make that happen. Frankly, she'd make a better Ra than Geoffrey Rush. I'd believe her in that role.

The success of "diverse" shows gives the lie to any claim that American audiences just don't want to see brown people in leading roles. To the contrary, America seems to be craving it, just as long as the stories are well told.  In place of apologizing for the lack of diversity on its cover, maybe the Hollywood Reporter can interrogate its role in perpetuating that system. And maybe, instead of just feeling really, really bad, they can use their words to do something for good.