Close the mosques, lock up the immigrants and pass the "Liberty cabbage": A brief history of our bigotry and ignorance, from John Adams to Donald Trump 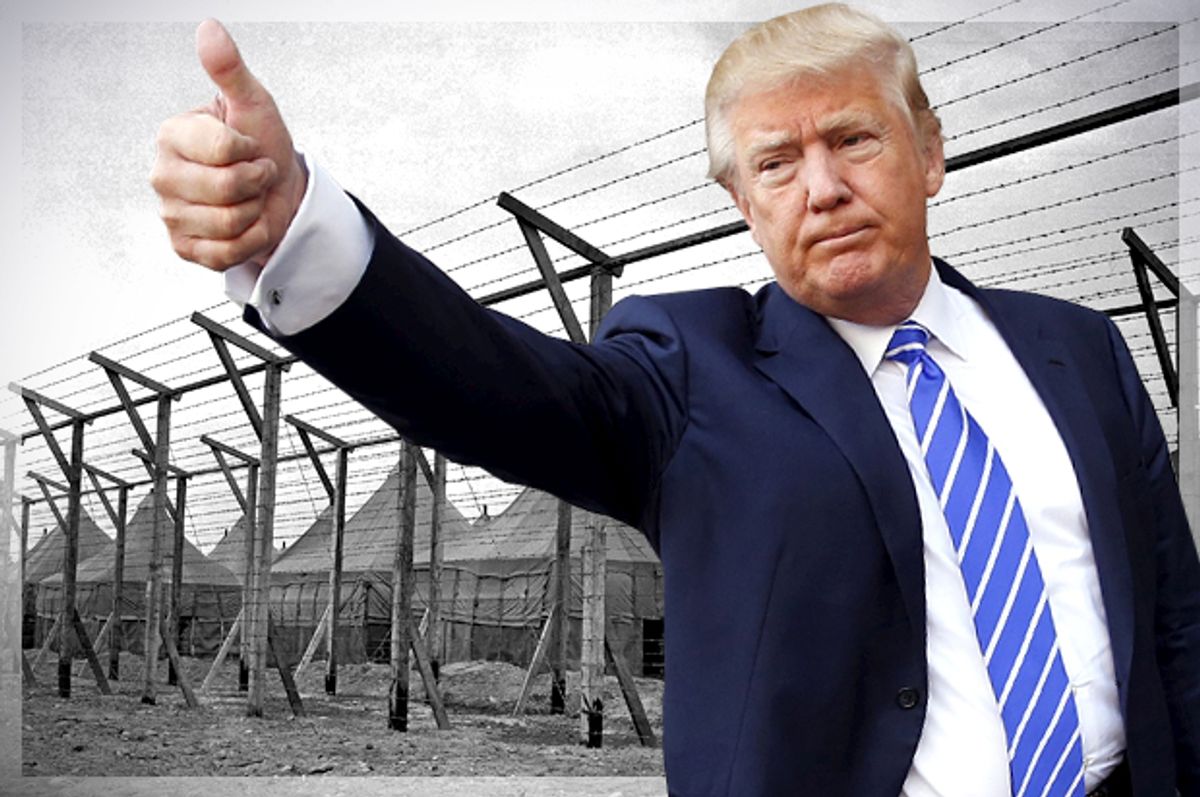 Know what it says on the pedestal of the Statue of Liberty? Along with hundreds of thousands of other New Yorkers, I see her almost every day during my daily commute, while the Q train crosses the Manhattan Bridge. If I remember to look up from my phone, that is. She looks a little marooned out there in the middle of the harbor, even amid the swarms of tourists, as if inside her renovated copper-clad head the Roman goddess Libertas (that’s who she’s supposed to be) is all, WTF happened and where am I? So the other week I decided to go out and have a look at her. Some people say that in the middle of the night, when everyone in New York is drunk or asleep, she puts down that torch and makes ironic air-quotes around herself instead: Here I am, the Statue of “Liberty,” ha ha.

Anyway. The famous sonnet by Emma Lazarus, which is engraved on a bronze plaque inside the statue’s pedestal, concludes with Lady Liberty (or the “Mother of Exiles,” as Lazarus calls her), telling us: “Give me your tired, your poor,/ Your huddled masses yearning to breathe free,/ The wretched refuse of your teeming shore./ Send these, the homeless, tempest-tost to me,/ But the moment anything goes wrong, feel free to kick their ass.” That last line doesn’t scan correctly, and it also isn’t technically included as, like, actual words. But I think we all know it’s there.

The Islamic State’s murderous attacks in Paris, combined with the Syrian refugee crisis, have produced a familiar reaction and galvanized one of the oldest and ugliest currents in American political life: Blame the newcomers and the outsiders and the “tempest-tost” for everything, especially for really scary stuff that hasn’t actually happened. Donald Trump made headlines on Monday by suggesting that the United States should “strongly consider” shutting down certain mosques, to which the constitutional guarantees of free speech and religious freedom evidently do not apply. You could say that’s just another endearing instance of Trump being Trump, except that a great many citizens clearly agree with him. He defended that idea as “common sense” later in the week, during a press conference where he also claimed that the U.S. is “not bombing” ISIS territory. (If you don’t count the 6,353 air strikes the Pentagon says we have conducted in Iraq and Syria since August 2014.)

David Bowers, who is the Democratic mayor of Roanoke, Virginia, claimed his split-second in the annals of American history not merely by doing everything possible to keep Syrian refugees out of his pleasant river-valley metropolis, formerly known as Big Lick. Everybody’s doing that, but Bowers went above and beyond, drawing a parallel with Franklin D. Roosevelt’s infamous decision to send Japanese-Americans to internment camps during World War II. That was a good thing, you see: FDR “felt compelled to sequester Japanese foreign nationals” after Pearl Harbor, and “the threat of harm to America from Isis now [sic] is just as real and serious as that from our enemies then.”

Bowers has been subjected to widespread derision, not least from “Star Trek” actor and activist George Takei, who spent four years of his childhood in internment camps. The mayor of southwestern Virginia’s largest city was apparently unaware that most of the internees were not “foreign nationals” but U.S. citizens or legal residents, and that the government has officially apologized for the internment policy and paid reparations to survivors and their families. But I’m not sure any of that matters. Pronouncements from liberal celebrities and ACLU chapters do absolutely nothing, and perhaps less than nothing, to address the underlying American problem. There’s something wondrous and horrible about the fact that someone so prodigiously ignorant about recent history, and so clearly inflamed by unreasoning bigotry, can be elected to public office in the United States in the 21st century. But if you think that kind of willful blindness is limited to one Podunk mayor in the “Star City of the South,” you’re kidding yourself.

Neither the Paris attacks nor the migrant crisis in Europe has had any material impact on the United States, and even though this is basically irrelevant, let’s throw in that any connection between those things remains somewhere between speculative and imaginary. Yes, one of the Paris attackers apparently entered Greece earlier this year with a fake Syrian passport, but we still don’t know who that guy was or where he came from. It’s also possible that the French and Belgian citizens apparently involved in the attack took advantage of the chaos along the Eurasian frontier to travel back and forth between Western Europe and ISIS territory without being noticed. But we don't know whether that happened, and if it did there's no obvious way to prevent it short of dividing the world into opposing armed camps under permanent military rule. Which is, to be fair, a massive turn-on for many people on the fanatic fringes of both the Islamic world and the Western right.

Perhaps I am defining “material impact” too narrowly. In an environment of anti-immigrant hysteria and anti-Muslim paranoia, Paris has released powerful American fears and fantasies that were never far below the surface, and that threaten to upend the topsy-turvy 2016 campaign one more time. As my colleague Elias Isquith has noted, this is a moment of grave electoral danger for the Democrats, who risk being perceived by the left as unwilling to stand up for essential principles and by the right as being too wimpy to fight terrorism. It has put the “mainstream” Republicans back on the defensive against Trump’s all-purpose xenophobia, after an interlude when they thought they were wearing him down. Ted Cruz and Marco Rubio and Jeb Bush are all striving to declare themselves at least as enamored with endless war in the Middle East as Trump is. (I’ve lost track of all the different things Jeb! has said about his brother’s Iraq invasion, but I’m pretty sure he’s for it again.)

There is nothing redeeming about this moment of national cruelty and cowardice, and at least in the short term none of its outcomes are likely to be good. But there’s also nothing new or especially surprising about it: This current goes back well before 9/11 or the presence of any measurable Muslim population, and well before Pearl Harbor and the racist travesty of Japanese internment. In the late 1930s, after the anti-Semitic character of Hitler’s government was beyond dispute and even after the pogroms of Kristallnacht, Americans overwhelmingly opposed allowing Jewish children to enter the country as refugees. Go back to World War I and German immigrants (a group that had been widely tolerated) became the targets of numerous vigilante groups and volunteer spy organizations. Thousands were interned, many were tarred and feathered, and a few were lynched. German-language newspapers were required to publish translations of all political articles, and South Dakota actually banned telephone conversations in German. Restaurants sold sauerkraut as “Liberty cabbage” and hamburger as “Liberty steak.” (No, I’m serious.)

In fact, the Espionage Act of 1917, enacted to crack down on supporters of the Kaiser’s empire, is still on the books. To the everlasting shame of the Obama administration, it was hauled out and dusted off after decades of disuse in order to prosecute government whistle-blowers, including Chelsea Manning and Edward Snowden. That law’s more far-reaching successor, the Sedition Act of 1918 (which was later repealed), deliberately recalled the Alien and Sedition Acts of 1798, which could be perceived as the American original sin in this regard. President John Adams and the Federalist Party put those laws forward as essential to national security (because that’s what you always say), but historians almost unanimously agree that their real purpose was to suppress or expel newly arrived radicals from France and England, who overwhelmingly supported Thomas Jefferson and the Democratic-Republicans.

There’s much more history behind the current and deeply shameful panic over Syrian refugees than I can possibly cover here, and to some extent this crisis speaks to our profound ambivalence about what democracy means and how it’s supposed to work. The Trump-Bowers moment reflects both specific contemporary concerns about Islam and terrorism and also the paradoxical nature of an immigrant nation subject to recurring waves of anti-immigrant fever. Isn’t the Statue of Liberty, by her very nature, a work of alien sedition, designed and built by Frenchmen and engineered by a Norwegian? Emma Lazarus came from an affluent New York Jewish family, and her florid sonnet is entirely of a piece with her activist work helping Jewish refugees resettle on the Lower East Side. No wonder Lady Liberty feels lonely out there -- she's not a true American. Ann Coulter should launch a campaign to have her torn down.

Abraham Lincoln, with his peculiar ability to see far beyond his personal confusion, perceived all this coming, or rather perceived that it was already here. Five years before he was elected president, when he was still a long way from an abolitionist position, let alone the belief that black people might be entitled to equal rights of citizenship, Lincoln wrote a memorable letter to his slave-owning friend Joshua Speed. His subject was both the Kansas-Nebraska Act, which promised to open up the American West to slavery (and led directly to the Civil War), and the rise of the anti-immigrant Know-Nothing Party, pretty much the direct ancestors of Donald Trump. Lincoln had begun to grasp at the great rhetorical theme of his presidency, the idea that the Declaration of Independence held a great, unfulfilled promise that must not be relinquished. Alter a word in this passage, here or there – substitute another denomination for Catholics, perhaps -- and I submit that it describes our situation 160 years later with eerie precision.