Free Kesha now: Sony is forcing her to work with her alleged abuser — or she doesn't work at all

Kesha's safety and career are still at risk in the fight against her producer and alleged sexual abuser Dr. Luke 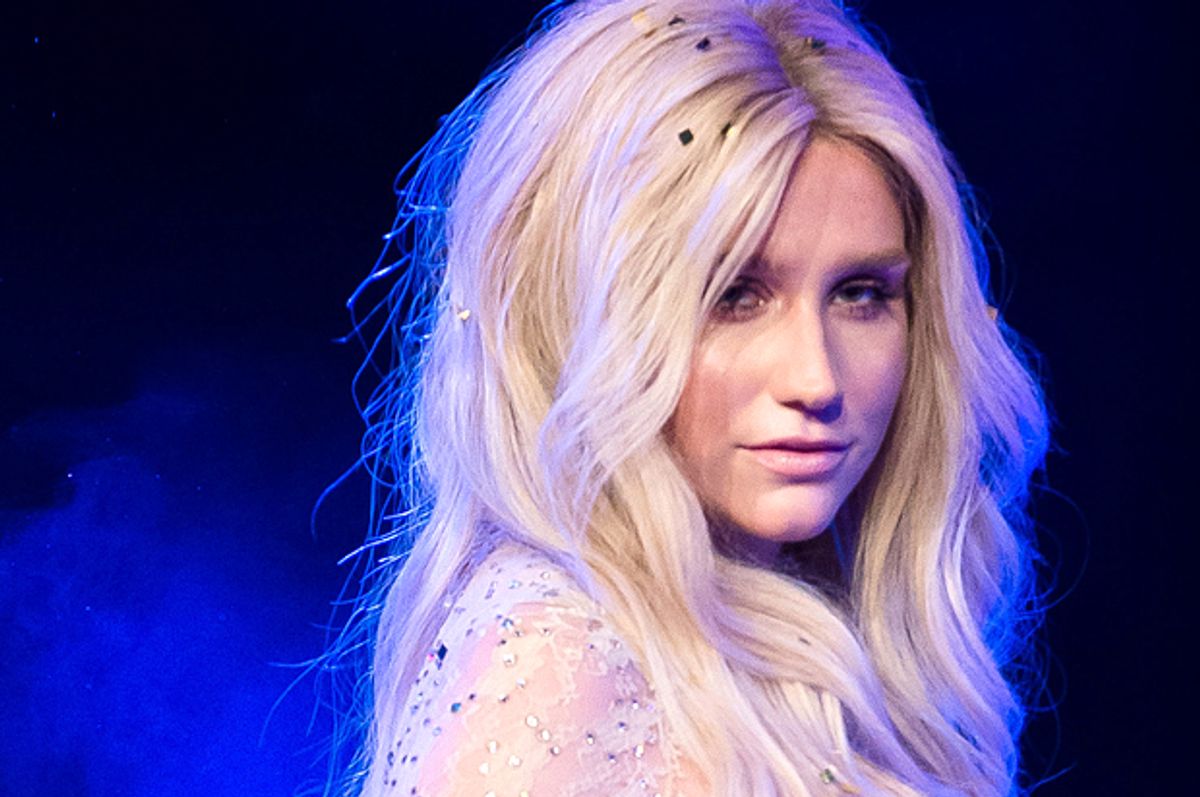 As Salon reported back in September, the pop star Kesha is currently embroiled in a contentious civil lawsuit with both her longtime producer Dr. Luke (aka Lukasz Gottwald), and the record label Sony. (Kesha’s signed to Gottwald’s Kemosabe Records, which is an imprint of Sony, as well as his publishing company, Prescription Songs.) In the suit, she alleges years of physical, sexual and emotional abuse from Dr. Luke, and asks to be freed from these record and publishing contracts. Gottwald, in turn, summarily sued her for (among other things) defamation, and accused her of using legal action to try to get out of her deals.

Also back in September, the Twitter hashtag #FreedomForKesha trended on Twitter, in a show of solidarity for the singer-songwriter. The outpouring of support came on the heels of a Hollywood Reporter article that revealed Kesha’s legal team had called for a preliminary injunction to expedite court proceedings, after claiming the current legal action means she’s at “an impasse. She cannot work with music producers, publishers, or record labels to release new music. With no new music to perform, Kesha cannot tour. Off the radio and stage and out of the spotlight, Kesha cannot sell merchandise, receive sponsorships, or get media attention.”

To punctuate the dire nature of this situation, the brief went on to say, “Her brand value has fallen, and unless the Court issues this injunction, Kesha will suffer irreparable harm, plummeting her career past the point of no return." Sadly, it appears that this pleading hasn’t done much good: At the end of October, the Hollywood Reporter revealed that Kesha told Sony she’d record an album for them, as long as Dr. Luke and Kemosabe weren’t part of the equation. The article noted Sony rejected this deal on Oct. 13; in fact, Kesha’s attorney, Mark Geragos, stated in court filings, "The letters in response indicated both Sony and Dr. Luke believe the exclusivity clauses remain in effect, they will not agree to refrain from enforcement, and Sony specifically will not work with Kesha unless she agrees to work with Kemosabe and Dr. Luke’s company, KMI.”

As in 2013—when an online petition called “Let Ke$ha have creative freedom” circulated—Kesha’s fans aren’t taking these setbacks quietly. A new petition titled “Tell Sony Not to Force Her to Work With Her Alleged Abuser” currently has more than 56,000 signatures and is being promoted on Twitter with the hashtag #FreeKesha and via the influential activist social network Care2. The media is also keeping the court fight visible in the news cycle: Earlier this week, writer Haley Potiker at the website Passion of the Weiss delineated Kesha and Dr. Luke’s decade-long professional association and the ongoing legal maneuvers in a meticulously researched post, “What Happened to Kesha? A Timeline.”

Seeing the scope of the accusations and allegations spelled out so clearly was heartbreaking and horrifying, especially since the alleged abuse appeared to start very soon after Kesha dropped out of high school and moved from Nashville to Los Angeles to pursue music. As this article points out, her lawsuit’s initial complaint stated Dr. Luke “forced [her] to take drugs and alcohol in order to take advantage of her sexually while she was intoxicated.” At another point, the lawsuit alleges that he raped her after giving her the date-rape drug GHB—which the suit says he called “sober pills”—and then “threatened that if she ever mentioned the rape to anyone, he would shut her career down, take away all her publishing and recording rights, and otherwise destroy not only her life but her entire family’s lives as well.”

After taking readers through the timeline of events, Potiker turns to analysis of the legal situation, writing that the Kesha vs. Dr. Luke case represents “much more than freedom of expression, much more than financial opportunity. What a judge will have to decide, in what will likely be a precedent-setting decision, is whether Dr. Luke’s alleged crimes against Kesha are reasonable grounds for her to break her contract with him.”

Indeed, what makes this case so complex is that the business and personal aspects of the accusations are inextricably linked. In fact, it’s a case of workplace harassment—a man in power allegedly using his position to subdue and exploit a subordinate.

As has been pointed out in many pieces this year, such discrimination, sexism and abuse plagues the music industry. Kesha’s lawsuit just so happens to contain the most high-profile allegations to date of what so many other young female musicians face when starting their career. The risks involved with speaking out against these ingrained issues are huge; in fact, it’s incredibly brave of Kesha to risk her career by embarking on this suit, as she has plenty to lose.

“All Kesha has is her word against Luke’s–a man who happens to be one of the most sought-after super-producers in the industry,” Potiker writes. “In this case, if Dr. Luke emerges the victor it will mean he will maintain his contractual control over Kesha, and with it a green light for continued abuse. Kesha’s fight is one for bodily autonomy as well as her livelihood–one that she can’t afford to lose.”

Indeed, the lawsuit is also bittersweet, because it has silenced Kesha’s musical momentum. And while plenty of talented, smart pop ladies have risen to prominence in recent years, her absence is deeply felt on the radio and the charts. Her songs occupy a distinctive, glittery space in the nexus of new wave- and hip-hop-inspired electro and rock. In fact, her hits have always been playful, lighthearted and even humorous—notably, the indelible “Dinosaur” disses the phenomenon where older guys hit on younger women—without feeling dumbed-down. (Although the debauched “Tik Tok” may seem to be a party girl novelty, the song is too well-crafted to be a brainless fluke.) Kesha was and is a beacon for misfits and weirdos.

But until there’s a legal resolution one way or the other, she’s stuck in this painful career limbo where her freak flag is flying at half-mast. As attorney Geragos put it in a court filing, "Kesha now faces an abysmal decision: work with her alleged abuser...or idly and passively wait as her career tick-tocks away," he wrote in a court filing. "She is precluded from working in perpetuity because the term of her contract can only be satisfied if she records three more albums. Kesha needs the Court’s assistance."

As Potiker points out, the urgency of this decision stems from the fact that its ramifications are deeply personal. “Kesha’s claims against Luke and Sony have broad implications for women who are under the contractual control of abusive men. At a key moment when women in music are coming forward with their horror stories of industry sexism, it is time to rally around–and believe–Kesha.”