Jeb Bush adviser just comes out and says it: Donald Trump looks like a fascist

#TeamJeb won't let The Donald walk this one back 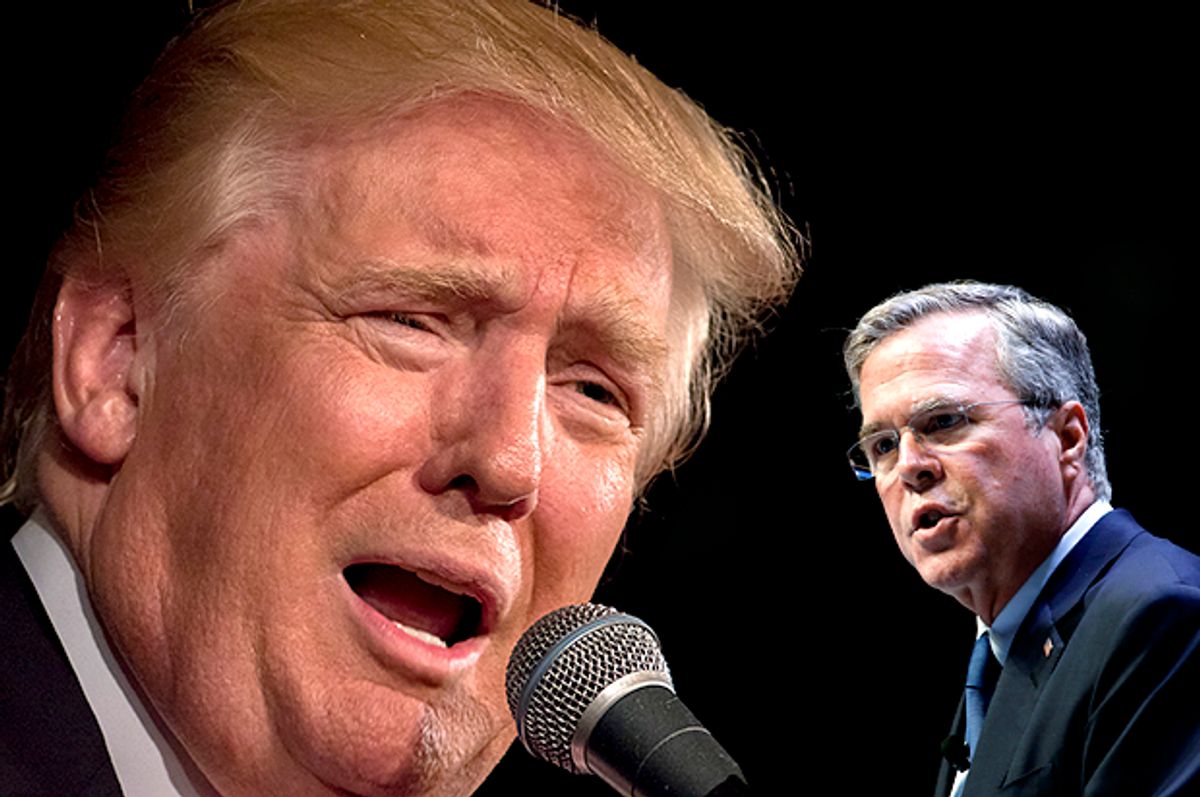 Jeb Bush is not joining his fellow Republican, Donald Trump, in arms in the age-old tradition of conservative combat against biased media reporting, and instead, Jeb and his campaign team are piling on The Donald's latest absurd suggestion that there should be a database to track and monitor Muslims in the U.S.

A bit of a mini-media controversy erupted Thursday afternoon when headlines blasted news of Trump suggesting the mandatory registration of Muslim Americans: "Trump won't rule out database, special ID for Muslims in US."

But, Mother Jones' Kevin Drum quickly pointed out the flaw in the rush to report the latest Trump absurdity during a week of ugly xenophobic one-upmanship:

It would be one thing if Trump floated the idea himself of warrantless searches and special IDs. It's quite another if a reporter brings them up and Trump tap dances a little bit. Needless to say, in a better world Trump would have explicitly denounced all these ideas. Obviously we don't live in that world. Still, the only thing Trump actually said here is that we're going to have to look at a lot of things very closely. The rest was just a reporter fishing for a headline.

Although on Thursday morning, Trump was merely responding to a series of hypotheticals laid out by Yahoo's Hunter Walker, that evening, the GOP presidential frontrunner had already jumped to expounding on how his "good management" would help pull off such an audaciously unconstitutional feat.

“For Muslims specifically, how would you get them registered into a database?” NBC reporter Vaughn Hillyard asked.

“It would just be good management,” Trump said.

Faced with the worst poll numbers of his whole campaign this week, a 3 percent polling Jeb Bush was quick to put his gloves back on and, once again, pounce on an opportunity to punch Trump.

"We’re electing a president," Jeb explained this morning on CNBC's "Squawk Box." "There are things that are important as it relates to the values that we have as a country that make us special and unique, and we should not and we will never abandon them in the pursuit of this fight. We don’t have to. We can protect our freedoms here.”

His campaign was also quick to go after Trump's comments, with one national security adviser calling Trump's suggestion fascist:

This afternoon, Trump attempted to walk-back his comments: