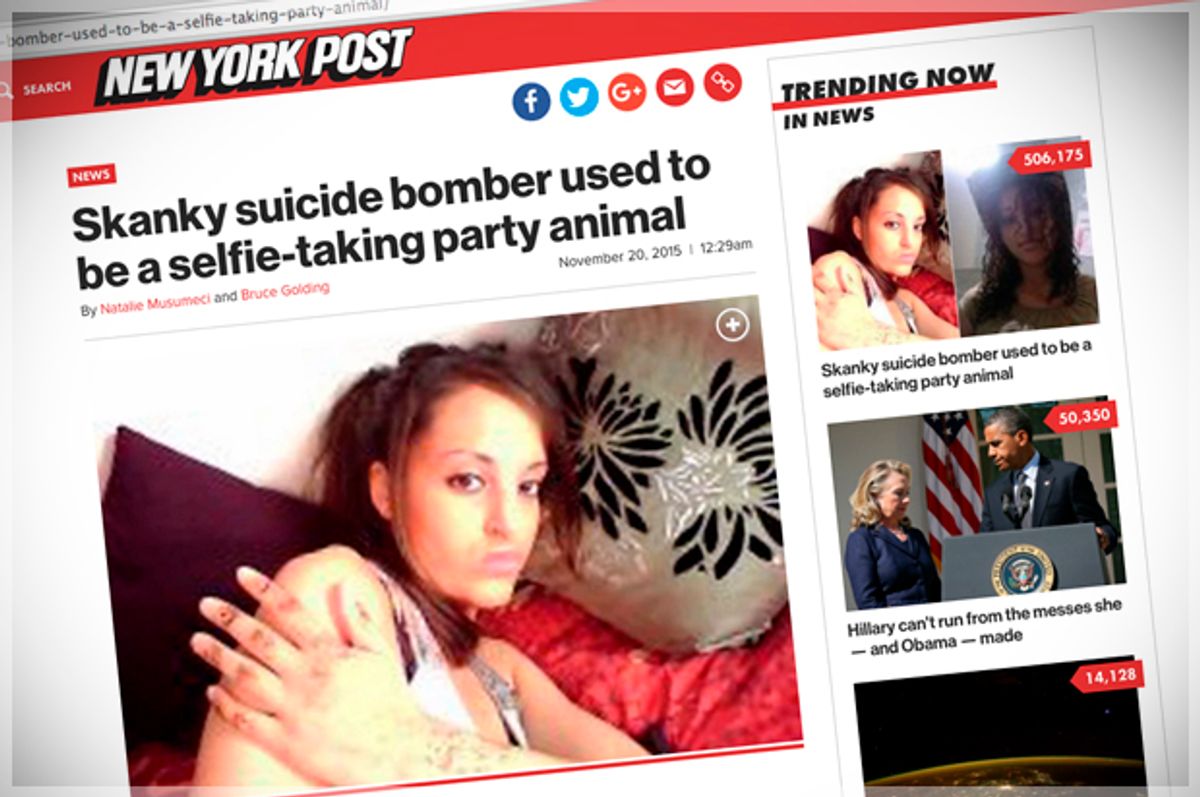 Few things give us a better snapshot of our times than the press reaction to the female suicide bomber, a 26-year-old woman named Hasna Ait Boulahcen, who died in Wednesday's raid on an apartment in Saint-Denis, a Parisian suburb where the suspected ringleader of Friday's attacks was hiding out. Boulahcen's story shouldn't be surprising to those who have been following the growth of ISIS. The story of the normal-seeming, if lost, young person who gets caught up in the fundamentalist cult teachings of ISIS is a standard tale. But Boulahcen was female, and so the forces of sexual objectification are kicking in, creating a grotesque display.

"Skanky suicide bomber used to be a selfie-taking party animal," reads the headline at the New York Post, whose front cover is a bathtub selfie Boulahcen took of herself, presumably before her cousin, Abdelhamid Abaaoud, converted her to ISIS's radically fundamentalist version of Islam.

"EXCLUSIVE: Extraordinary selfie of Europe's first female suicide bomber shows the jihadi who never read the Koran, liked to drink and smoke and had a reputation for having lots of boyfriends," screams a similar headline at the Daily Mail.

Both articles obsessively comb over every detail of Boulahcen's pre-conversion life: Her partying, her drinking, the amount of sex they suspect she had, her clothes and even her "heavy makeup", which both articles take pains to point out. It's the same kind of thing you see these right wing rags doing day in and out, simultaneously inviting their audiences to leer at and sit in judgment of young women for their clothes, their sexual choices, even their propensity to take selfies (which is assumed to be motivated by base narcissism, unlike reading articles assuring you that your generation is superior to the kids these days). It's a weird display, considering that the reason Boulahcen is in the news has nothing to do with her sex life or vodka consumption. It's really the mass murder that is the reason we know her name at all, I'd say.

Mainstream coverage of Boulahcen's role in all this has been more restrained, but still, there's a lack of skepticism of the good-girl/bad-girl dichotomy that is so explicit in the tabloid coverage. ABC News spoke to terrorism expert Mia Bloom about this, and she zeroed right in on the the way the virgin/whore dichotomy shapes female initiation into ISIS.

“You know this is really consistent with a lot of women who join the jihadi groups they live this very licentious lifestyle and then they become a jihadi they completely reinvent themselves. It's a way of becoming a completely new person,” Bloom said. “There are two kinds of women that ISIS is going after. They go after very young Muslim girls who are straight-A students and very high-achieving, but they also go after much older women who have a past, that by joining the group, they can reinvent themselves and be a good girl now. And they really do over-compensate.”

If you want to know where a woman like Boulahcen got the notion that the difference between "good" and "bad" is not in how you treat others (starting with not killing people), but how much of your body you cover up in public, well, look no further than the Post and Mail coverage of this story. If fundamentalists, even radical fundamentalists like ISIS are able to convince women that their morality lies not in their heart or their brain but in what they do with their vagina, that's because the entire culture around them is saying the exact same thing.

Obviously, the reason that people, both men and women, join ISIS  is complex: Feelings of alienation, mental health issues, and sadism all play a role, in different degrees with different people. But the reason the women draw so much attention is it's hard to fathom why women would align themselves with such a misogynist ideology. The men get promised the perks of patriarchy, particularly the sense of being little kings of their little hills. But the women just get to be relegated to a subservient role, putting their lives on the line without the reward of being told they're the best just because of the gender they were born into.

But really, the answer to that question isn't that hard to understand, because women align themselves with misogynist ideologies every day, around the world. Every strain of fundamentalism is misogynist---in some cases, that seems to be the driving motivation behind its existence---and yet, you see women lining up. And this virgin/whore crap is the reason why. What fundamentalist religions tell women is that while they'll never get to be men, at least they can get to be better than other women, simply by virtue of having more cloth on their bodies and submitting to heavy controls on their sex lives.

If the rest of the world didn't constantly drum home the message that you're a "slut" or "skanky" because you have sex or wear make-up or wear tank tops, then this fundamentalist message would lose a lot of its allure. But since women are going to be judged for their sexuality no matter what they do, it's easy to see why a lot of women are going to decide it's easier to be on the side passing out judgments rather than being called a slut.

As for Hasna Ait Boulahcen, the reason she was a bad person is that she seemed to have helped kill people and, even in her death, she was trying to kill more people. Her drinking, her sex life, her clothes, and for God's sake, her selfies, have no bearing on her morality. That this is hard for so many people to see shows we have a long way to go on this issue.