Springsteen's "Ties That Bind": The new documentary goes deep into the "adult concerns" that fueled "The River" 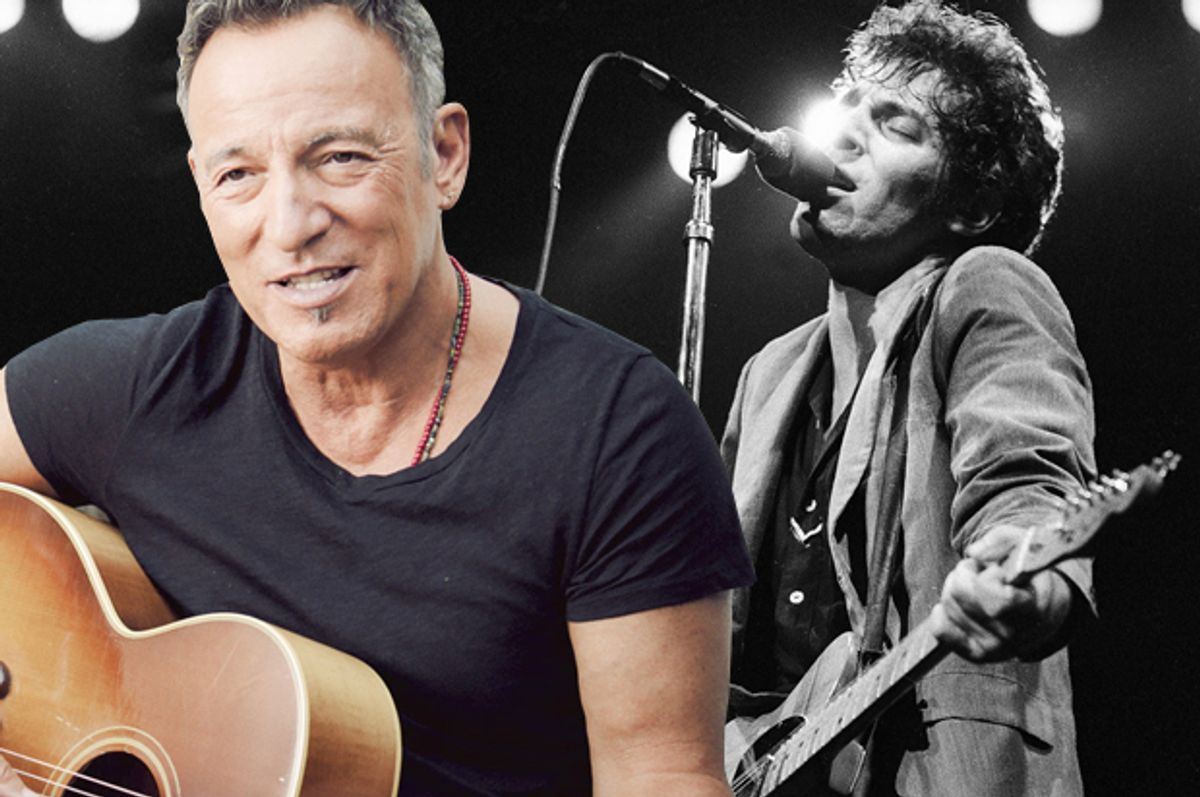 "The Ties That Bind," the new Bruce Springsteen documentary about the recording of his 1980 album "The River," had its world premiere Saturday night in New York City as part of the NYC DOC documentary film festival. The 60-minute film is one of the central elements included in the upcoming retrospective box set around the record, "The Ties That Bind: The River Collection" (Columbia Records), to be released Dec. 4.

The documentary, which will air on HBO on Nov. 27, is the latest from director Thom Zimny, who has established himself as Springsteen’s main cinematic go-to guy since his work on "Live in New York City" back in 2001. Zimny also directed "The Promise: The Making of Darkness on the Edge of Town," which accompanied the 2010 box set of the seminal 1978 release, and won a Grammy for his work on "Wings for Wheels: The Making of Born to Run," from that record’s 30th anniversary box set.

Unlike "The Promise," whose central element was a treasure trove of archival footage of the band in rehearsals and in the studio, and "Wings for Wheels," which focused around a full concert film of the band in that time period, "The Ties That Bind’s" primary narrative element is recent interviews with Springsteen, interspersed with intimate acoustic performances. Zimny then weaves archival images--still photographs and video footage--in, around and over the newly created material. The end result is a tight, compact narrative that still provides a fascinating view into the frustrating 18-month process of recording the album, as well as sharp insight into Springsteen’s thought process behind writing the songs and his personal touchstones and motivations at the time.

Despite the focus on Springsteen as the main subject, make no mistake: This isn’t a puff piece or a victory lap: the end product is compelling because Springsteen’s memory for detail is remarkably deep, and he is more than willing to be both reflective and critical of himself.

A healthy percentage of the interview shots are in tight focus on the man’s now 65-year-old face; he’s gone grayer than he was when you last saw him, and the crows’ feet around his eyes are a little deeper. The tightly framed close-ups create an intimacy that brings the viewer into the conversation; they also allow you to feel both Springsteen’s exasperation with the recording process--he will actually later use that word--and his emotional frustration at his younger self. These are the moments where Zimny then wisely cuts to archival photographs or video footage of Springsteen and the members of the E Street Band on the stage or in the studio, to remind the audience of that particular band of brothers at that particular time, before coming back to the present day.

"The River" began as "The Ties That Bind," a 10-song album recorded over the course of a year, and handed into Columbia as finished product. (The film keeps a scoreboard-like tally throughout its duration: in this case, 24 songs were recorded, 13 were rejected, 11 were sequenced.) But, as Springsteen explains, the more he listened to it, the less he thought it accomplished what he had set out to do. He’d had very lofty goals for the record, and what he wanted to write about. “I wanted to write for my age,” he says in the film. “I was inspired by things older than rock music.” He was listening to classic country--Johnny Cash, Roy Acuff--and wanting to bring some of that to what he was doing. “It had adult concerns,” Springsteen says, “and I was interested in going there.”

The film then cuts to amazing private footage of E Street Band drummer Max Weinberg’s 1981 wedding to his wife, Becky, where the E Street Band were the wedding band (and appear to have all enjoyed some adult beverages before getting onstage). “We used to sit on the tour bus and bet who would get married first,” Springsteen announces to the wedding guests. He then polls the band, who all shake their heads in firm denial; saxophonist Clarence Clemons, wearing a formidable straw hat, adds, “I tried it once.” It is a wonderful moment, and is the kind of footage a fan hopes to find in a documentary.

“The band was not very grown up,” Springsteen adds in the background. “It was still very much the Lost Boys.” Zimny then brings us back to a tight shot of Springsteen’s face: “It was a mystery how people were successful at those things,” he says, cocking an eyebrow and launching half an eye roll at his younger self, as narration and a note of his emotional motivation behind the record.

Springsteen--producing the record alongside manager Jon Landau and E Street Band guitarist Steve Van Zandt--wearily relates that the trio had no idea what they were doing in the studio, to a certain extent. “How do we get that snare drum? I don’t know.” The second time around, the band recorded 28 songs, 18 were rejected, and 10 were sequenced for a single album. But, as he tells us in the film, with visible frustration, “It didn’t feel big enough. It didn’t have the room to let in all the different colors. It wasn’t quite funky enough. 'Darkness' was tight; we wanted to go the other way. The records weren’t as exciting as the live show.”

He also relates how the production ethos was to get away from the trend in '70s recording of compression, of tightly controlling every element of the sound. “The records we liked were noisy records,” Springsteen says, before noting the internal conflict between Steve Van Zandt and Jon Landau when it came to their tastes and what they thought a record album should be--Van Zandt advocating for noise and chaos, Landau for a smooth narrative arc--and how Springsteen mostly got out of the way and let them hash it out. This is the one place where not bringing in other voices to tell the story--as Zimny did most notably in "The Promise"--is unfortunate, because hearing the two men talk about the conflict in their own words would have been illuminating, and also most certainly entertaining.

And yet, the recording sessions continued: “We recorded and recorded and recorded. I worked the hardest on things that ended up as outtakes,” Springsteen says. (He later relates that the omission of the song “Roulette,” a great, frenetic rocker inspired by the Three Mile Island crisis, and the first track recorded by the band for the sessions, but that didn’t make the final cut, was the biggest oversight.) “I was exasperated. How do I make a record? I come out with 10 songs I can stand.” The emotion of the time still colors Springsteen’s voice.

The film takes us through the writing process for the record through an explanation of writing “The River,” how he would sit in his house with an acoustic guitar and a boombox, and write and sing and hit record, and keep that process up until he had something he was happy with. "‘The River’ was the touchstone to all my writing later,” Springsteen relates. “It was a political record about the Carter recession and its effects on working people.” He relates how prior to beginning to write the record, that he had been reading a lot of history: “I wanted to understand where I came from, and what that meant.”

But even with “The River” finally in place, Springsteen still wasn’t satisfied; the latest sequence of the record felt too slow and somber. That was the moment at which the decision was made to go to a double record, and how that finally gave him the room for the quiet songs, the reflective songs, and the loud songs. The final total would be 20 songs, which still wouldn’t encompass every track that had been written and recorded for the record.

“It was big enough to contain an actual hit single,” Springsteen says with wry amusement, as the sounds of “Hungry Heart” come out of the speakers, and live footage of the band in performance appears on the screen. He explains that he wrote the song before he went to bed that night, after seeing the Ramones play a show in Asbury Park at the Fast Lane, and deciding that he needed to write a song for them; he also relates that after writing the song and going into the studio, he sat Danny Federici down at the B3 organ and “it floated out of his fingers.”

Sixty minutes isn’t a lot of time to talk about 20 songs, or almost two years of recording, so the film has to make some choices. Not every track can be discussed in great depth, or even at all; not every song is performed for the 2015 camera. The songs (or verses of songs) that do are the ones that Springsteen considers to be the thematic touchstones of the record: “The Ties That Bind,” “Two Hearts,” “Wreck on the Highway,” “Independence Day,” “The River,” and “Point Blank.” He describes “Independence Day” as “not completely autobiographical, but emotionally autobiographical,” and how he knew that when he had the last verse of “Point Blank,” that he’d nailed the song.

The die-hard fan might want to hear about the thought process that went into sequencing 20 songs into a double album; Zimny does get Springsteen to touch on it briefly as he discusses side four, and how he’d explicitly wanted the four songs on it to be “all summational, all goodbyes: love and death, life and death. I wanted the record to break down to that in the end.”

An hour of film would be insufficient to represent the entirety of the tour and the live show around "The River," so of course the 10 or so minutes represented in "The Ties That Bind" are going to feel sparse in the extreme. Of course, this is why there’s separate "River"-era concert footage included in the box set (from Tempe, Arizona, in 1980), and Zimny said he used every single bit of footage available to him, including professionally shot tour rehearsal film, within the documentary itself.

The detail of Springsteen’s recollections, combined with the emotional tenor of the conversation, and his ability to be a candid and critical observer of his own work, make "The Ties That Bind" a solid and fascinating document of a critical point in Springsteen’s career. Die-hard fans will see, learn and hear things they hadn’t encountered before, and casual fans will gain a new appreciation for the artist and the material. Hopefully, Springsteen will continue to chronicle the rest of his career in a similar fashion.