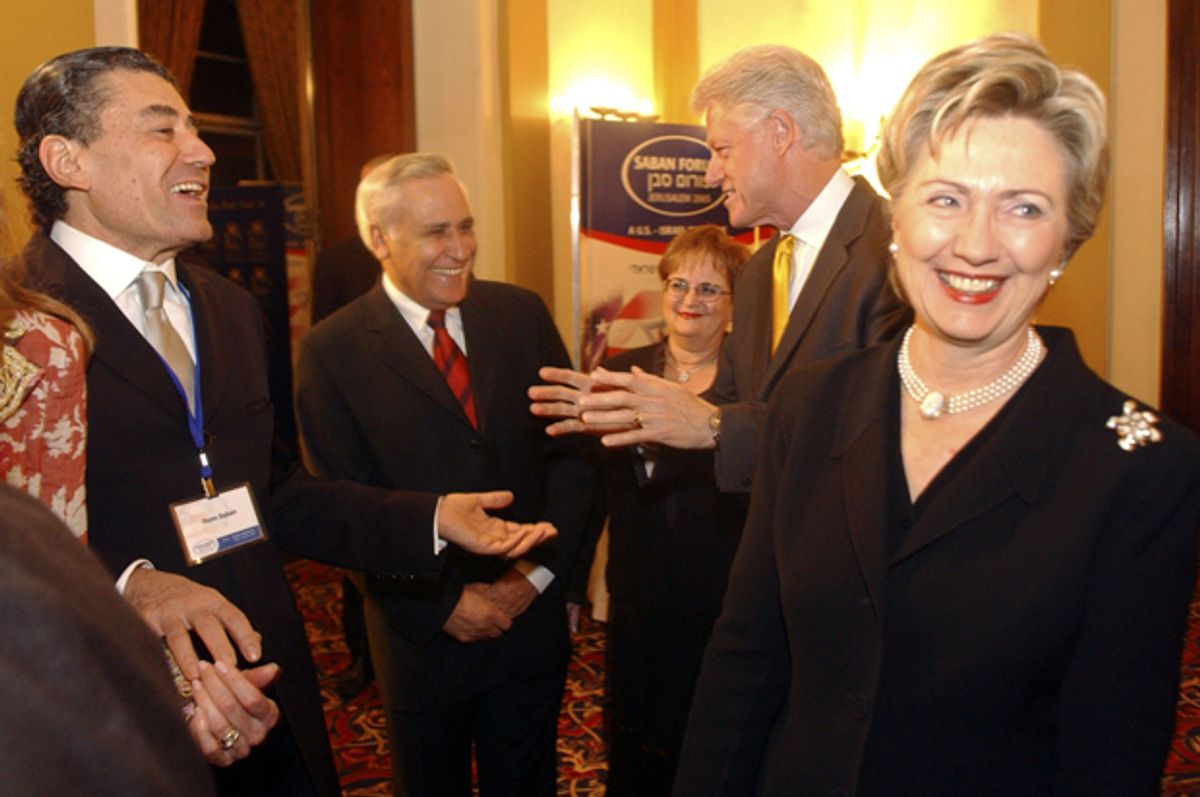 (This article was updated to include a follow-up statement from Saban, in which he clarified that he meant to refer to Syrian refugees, not all Muslims.)

"Profiling, listening in on anyone and everybody who looks suspicious, or interviewing Muslims in a more intense way than interviewing Christian refugees is all acceptable," according to top Hillary Clinton donor and prominent pro-Israel activist Haim Saban. The billionaire entertainment executive and media mogul, who is among the 500 richest people in the world, made these remarks in an interview with The Wrap.

"I’m not suggesting we put Muslims through some kind of a torture room to get them to admit that they are or they’re not terrorists," Saban added. "But I am saying we should have more scrutiny."

After this article was published, Saban's spokesperson contacted Salon with an updated statement, clarifying that Saban misspoke and actually defended harsher vetting practices for Syrian refugees, not all Muslims.

"I misspoke. I believe that all refugees coming from Syria -- a war-torn country that ISIS calls home – regardless of religion require additional scrutiny before entering the United States," Saban said. "I regret making a religious distinction as opposed to a geographical one: it's about scrutinizing every single individual coming from a country with ISIS strongholds."

Saban -- whom Clinton calls "a very good friend, supporter, and adviser" -- and his wife Cheryl have given $2 million to Clinton's Super PAC, Priorities USA Action. In May, he hosted a fundraiser for Clinton, earning her $2 million more. Those who hoped to dine with the Democratic presidential candidate at the event paid a minimum of $2,700 per person just to get in.

The November 13 ISIS attacks on Paris, Saban argued in the interview, will help Hillary Clinton in her presidential campaign. Clinton "has been in the trenches her whole life," Saban said. "She's also made of steel. She's absolutely made of steel and she will take no baloney from no ISIS." He described the Paris attacks as "a wake-up call," adding "I fully believe we're in a different kind of World War III."

In the updated statement, Saban said that, "while in contradiction to our country's principles in time of peace, I'm comfortable with the government taking additional measures, including increased surveillance of individuals they deem suspicious."

He also took several jabs at fellow Democratic presidential candidate Bernie Sanders, criticizing the self-declared democratic socialist for his much less hawkish positions. Saban maintained that Hillary Clinton's support for the illegal Iraq War, which Sanders and most of the American Left strongly opposed, "was the right vote." "She apologized, but I don't think she should have," Saban continued.

"But that's easy for me to say. I'm sitting in Beverly Park," he added, referring to the gated Los Angeles neighborhood Forbes describes as "Beverly Hills' mansion-packed billionaire community."

Haim Saban is known for his diehard pro-Israel stance, and for putting his money where is mouth is. He and leading GOP funder Sheldon Adelson have been described by former AIPAC official M.J. Rosenberg as the Koch Brothers of Israel.

Saban said the breakdown of negotiations between the Israelis and the Palestinians moved him "very far to the right," adding he is "sometimes to the right of [Avigdor] Lieberman," a far-right Israeli politician who called for the beheading of "disloyal" Palestinian citizens of Israel.

Despite his extreme right-wing views, Saban is a leading supporter of the Democratic Party. He has donated many millions of dollars to the Clintons, in particular. In the 2008 presidential election, he also publicly supported Hillary, for whom he raised large sums of money and held fundraisers.

The billionaire has founded several pro-Israel think tanks and organizations. "I'm a one-issue guy, and my issue is Israel," he told the New York Times.

Clinton wrote a letter to Saban in July, in which she smeared and vilified Boycott, Divestment, and Sanctions (BDS), a nonviolent global grassroots movement called for by Palestinian civil society that seeks to pressure Israel, through peaceful economic measures, to comply with international law and end its illegal occupation and oppression of the indigenous Palestinian people. Clinton asked the billionaire for advice on how to undermine the BDS movement, emphasizing "how crucial it is for America to defend Israel at every turn."

In her letter to Saban, Clinton also referred to U.N. resolutions calling on Israel to abide by international law and cease its illegal activity as "anti-Israel resolutions." Salon has exposed how, under Clinton's leadership, the U.S. State Department, in its own words, "deferred" U.N. action on Israeli war crimes, in hopes of "reframing the debate" about the atrocities and "moving away from the U.N."

In an interview with the right-wing Israeli publication the Jerusalem Post, Saban characterized Clinton as the ideal U.S. presidential candidate for Israel.