I left my church for my family

A part of me will always be Mormon, but how can I support an institution that tells me to disavow my brother? 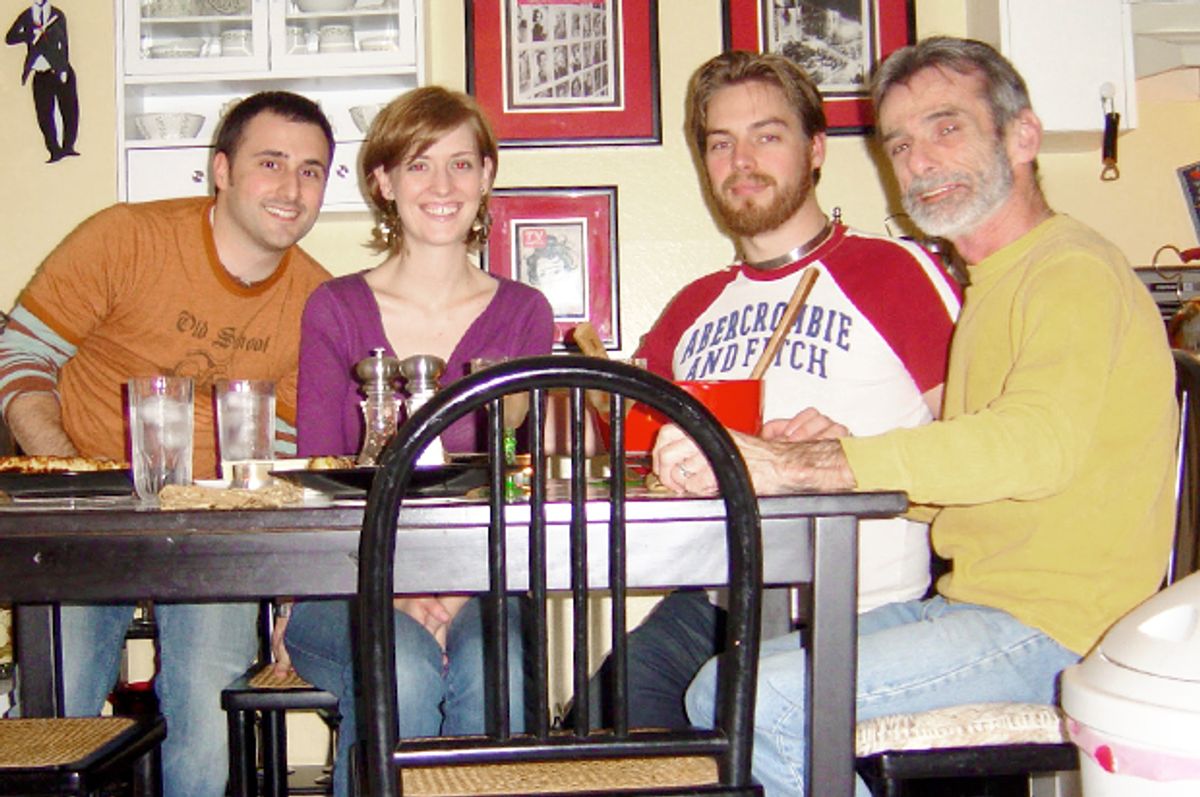 A photo of the author with her family.
--

Last week, my family and I resigned from The Church of Jesus Christ of Latter Day Saints. After the release of their new policy, which declares married gay couples to be apostates and bars their children from baptism until the age of 18 (and further requires them to move out and disavow their parents' marriage), we felt the church forced our hand.

Growing up in Utah, as a devout member of the Mormon church, I loved singing “families are forever” with my brothers and sister, and I took comfort in the doctrine that I would be with my family after I died. My siblings were my best friends. I didn’t think anything would ever come between us.

Then in 2002, a few years after returning from his church mission in the Philippines, my oldest brother announced that he was gay. My parents knew he had struggled with “same-sex attraction” as a teenager and had tried to keep it a secret from the rest of us. After his mission, he went to reparative therapy and Mormon Bishops counseled him to marry a woman. He considered it, but after two years, he felt he couldn’t "fix" himself, and decided to say as much to our family. He was alreading living in California and called us to deliver the news. I remember my sister running downstairs, screaming as if someone had died, “He’s gay!” She was sobbing. I went upstairs to find my mom. She was shouting into the phone with the scriptures open in her lap. Then she paused as she broke down in tears. “It would be easier if you were dead," she screamed.

The whole family was heartbroken, not just because my brother was a sinner, but because he shattered our idea of the perfect eternal family. We were on the phone for hours, quoting scripture, begging him to reconsider. After we hung up, my mom said a family prayer where she asked Heavenly Father to give him AIDS so that he would repent, return to church and restore our eternal family. “Destroy him,” she prayed, “so that you can save him.”

I loved my brother but at the time I saw being gay as a choice; I was angry with him for throwing away his covenants. I wanted to stay close to him, but I didn’t ever try to see things from his perspective. I lectured. I testified. I didn’t ask questions or offer to listen. I chose the church over my brother.

After everyone knew he was gay, my aunt and uncle were afraid to have him in their home.  My brother didn’t think we loved him any more, and I can’t blame him. We never spoke to him without trying to change him. He tried any drugs that people offered him, without asking what they were, just trying to dull the pain. He got hooked on crystal meth and became HIV-positive.

Eventually, he hit rock bottom and, without any help from our family, was able to get clean. He met a man who loved him for exactly who he was, no exceptions, and that turned things around for him. Finally feeling unconditional love gave him a way to heal from the conditional love that had nearly destroyed him. They were married in 2008, in the narrow window when it was legal in California. My parents met his husband and to everyone’s surprise, they liked him. “I can’t deny that he seems to be good for our son,” my mom said. I too adored him. He was gentle, attentive, artistic and brought out the best in my brother. For a brief moment, there was a ceasefire in the family. Then, the Mormon prophet asked all the members in California to canvass for the passage of Prop 8, something that would nullify their son’s happy and stabilizing marriage. My parents didn’t pause for reflection, they did what most faithful Mormons do when the prophet speaks: they obeyed.

I didn’t have to face the same decision as my parents because I lived in New York, but that was a turning point for me. I knew my brother’s marriage was beautiful and good and I could see how it had saved him. I finally realized I could love my brother, or I could support Prop 8 and boycott his “choices." I chose my family over the church.

It was an easier decision in some ways, because by this point, my father-in-law had come out of the closet as well. My husband’s younger sisters were teenagers at the time and were overwhelmed by the loss of their eternal family. On top of dealing with the trauma of divorce, and the shock of a gay parent, they felt spiritually homeless. Their Dad wasn’t going to heaven anymore, and since Mormons believe that families are saved together, they were terrified that they wouldn’t make it there either. One thing in Mormon doctrine was clear: there was no place for Dad in their family anymore.

As I helped my mother-in-law clean the kitchen, she cried and said it would be easier if he were dead. My heart broke for her, but my mind returned to my brother’s coming out, and my mother saying the same words. Suddenly it hit me: was it really better to lose someone forever than to expand our idea of what a family should be? I knew heaven was important, but it started to feel like we were torching all our earthly relationships to get there. I just wanted to open the door, and be a family again. In small ways, we  started to reach out.

My husband and I were the first to march with his father in a gay pride parade. It was not a political statement, but a thing we did because we loved him. The more we came to accept the new boundaries of our family, broken open but not shattered beyond repair, the more we found there was room to love him and his new boyfriend. My husband's sisters started to come around, too. The members of our church didn’t feel the same way, but I grew less tolerant of their judgment, less willing to apologize for loving my family unconditionally.

To be gay, or even to be fully accepting of your gay family member, is to become a second class citizen in the Church, and sometimes in your own family. It ripped mine down the middle. Those standing with the Church said they still loved us, but wouldn’t attend weddings, funerals or baby blessings. But how can you claim to love a person and at the same time refuse to accept the most fundamental aspects of their identity? How can you claim to honor the familial bond and at the same time, exclude a family from the rituals and traditions of family life?

While the Church stopped being a loving and faith-promoting community for me years ago, I doubt I would have removed my name from the rolls without the catalyst of its statement of exclusion. Being a Mormon girl is in my DNA. My ancestors pulled handcarts across the plains. I compulsively bake cookies for my neighbors. I pray with my children every day. I hum pioneer hymns in the shower and my personal motto is "Onward!" I wanted to remain connected to these traditions and beliefs in some way, because letting go completely felt too final, like a death I couldn’t ever prepare for. In leaving the church, I felt as though I'd be losing a part of myself. But with this new statement, they forced my hand; I can’t support or sustain an organization that doesn’t believe in my family. Maybe this prioritizing of family above all else is the way in which I am the most Mormon. I don't want to be a part of a community that is willing to suffer that kind of injustice in the name of God.
Still, it’s difficult to say goodbye and lay that Mormon girl to rest. It brings me comfort, though, to think that a new woman of faith and love is rising up in her place. I want to thank the Mormons for all the good I’ve learned from them: they taught me the value of getting your hands dirty serving others, that a little bit of optimism goes a long way and a casserole can save a new parent’s life. They taught me about family, and in our parting, exactly what I believe about it. The Church taught me that we are all part of the same big family, that there really is no such thing as other people’s children, that discriminating against any of them should hurt like it’s happening to yours, that “inasmuch as ye have done it unto one of the least of these, ye have done it unto me.” I believe families are forever, that love is what binds us, that everyone deserves to participate. No exceptions.

Joy Gabriel is a writer living in New York with her husband and children.