The influential film's original stock is deteriorating, right when it should be poised for a revival [UPDATED] 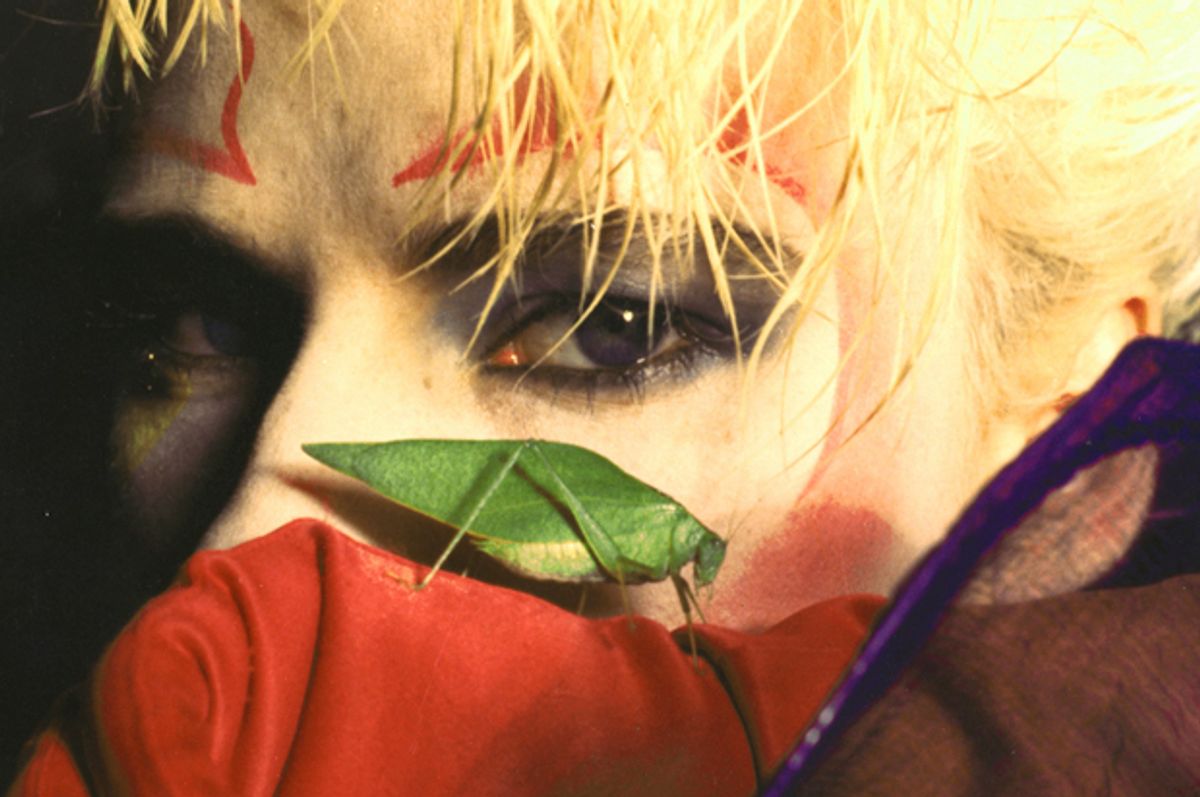 A glowing spaceship appears over the New York City skyline as dissonant New Wave music fills the multiple ears with their dangling rings. Junkies, models, poseurs and performance artists feed off each other in a battle to be the most fierce, all the while unaware that tiny aliens are harnessing their ecstasy. Most visitors to New York go to Serendipity for a frozen hot chocolate — these buggers are literally fueling their space ship with the power of the human orgasm, which turns the screen electric blue and red and green and purple.

"Liquid Sky" is set in New York City in the few years between disco and AIDS when young denizens indulged in exhibitionistic sex and hard drugs and took their fashion cues from the gleefully androgynous English New Romantic movement (big hair, frills, ruffles, theatrical make up). They danced like rusty robots in neon lit nightclubs. Within this odd demimonde Margaret (Anne Carlisle) lives and works as a successful model. She has the perfect life, with one exception: she kills everyone she has sex with, whether that sex is loving, non-consensual or even with her male doppelganger “Jimmy” (also played by Anne Carlisle, then a face at the Mudd Club, a key hangout of the period). Margaret is high maintenance (“You know this bitch takes two hours to go get ready to go anywhere,” says girlfriend Adrian, who nearly steals the film with her performance of “Me and My Rhythm Box”).

Shot in Ed Koch’s crumbling New York on a tiny budget, "Liquid Sky"’s now highly-influential look, which has informed the costumes of everyone from Karen O to Lady Gaga and Sia, came largely from Carlisle’s closet or thrift shop shopping bags. Carlisle, director Slava Tsukerman and co-producer Nina Kerova created a new kind of glamor queen who, Bowie-like, quite easily stokes the desire of the men and women — before leaving a crystal spike in the back of their brain. “I kill people that fuck me,” the character confesses. Is it worth it? Almost. Is it almost ghoulishly predictive? Absolutely. This was 1982.

“They already had AIDS, but it wasn’t that publicized,” says Tsukerman, who swears the film was conceived as science fiction. Tsukerman, who traveled from Moscow to Hollywood and then found himself in Carlisle's fast-fashion world, where it seemed that everyone was a dancer, painter, band member, filmmaker or actor, adds, “The information about AIDS came after Liquid Sky.”

Carlisle was equally aghast when her real life friends began dying of this new sexually transmitted disease. “It was so amazing, because the film is really about dying from sex and then everyone started dropping. It was really, really eerie. That happens sometimes in creative life. You do something and it’s an accident that it actually comes true. It’s mystical.”

The two were already well established in the world of downtown film before "Liquid Sky" was co-conceived. Tsukerman had a film called “Sweeet Sixteen” which was nearly financed. “It was about a girl who was killed in a car accident in 1935 and her father, a crazy scientist, saves her head and makes a mechanical body,” he says. Andy Warhol was supposedly committed make an appearance. Carlisle had a film called "The Fish" which she was showing around the clubs. When the pair met, it was clear that Tsukerman found his muse — but he had reservations, once "Liquid Sky" began pre-production, that Carlisle, primarily a painter, model and self described “nihilist” who attended the School of Visual Arts, could handle the role of both Margaret and Jimmy, even though, as she recalls, "I had a boy’s haircut and a mini skirt. No one else was doing that.” Carlisle convinced him one day. “We were scouting locations and I dressed as a man and I picked up a girl in front of him and that was my audition,” she says. “She thought I was a boy. I admitted I was a girl and she said she was still into it.”

"Liquid Sky" has a pre-apocalyptic feel of the Cold War sci-fi with the slickness of much more expensive films like its contemporary "Blade Runner," but the budget (about a half-million) nearly sparked a mutiny. “The crew was paid very little and they did revolt at one point over the food,” Carlisle says. “They were worked day and night. We worked terrible hours. That the film got made at all was a miracle. It was really — at one point, I was arguing with them, we're making art here and you're worried about food. And he said you’re making art here. We want pizza!”

Unlike Ridley Scott’s film, "Liquid Sky" was shot through with a kind of self-deprecating, New York Jewish humor. A rumpled, hapless professor (the lanky Otto von Wehnherr) is on the trail of the alien spacecraft and bumbles his way through the jaded world, where few believe or even care that there might be visitors feeding on the heat of human sexual climax. They're fixated on their next score, or on Chinese take out.

The film, released in the summer of ’82 at media-heavy film festivals, beginning in Montreal, quickly became a minor sensation. This was the height of the second British cultural invasion (Culture Club, Spandau Ballet, Duran Duran) which was of a piece with Carlilse’s androgyny and gear. It played at the Waverly Theater in New York City for about four years and Carlisle became a star, posing in and out of male drag for (warning: link NSFW) one of Playboy's strangest photo shoots.

Carlisle briefly moved to Hollywood and got an agent, but was confused that the only parts offered to her were supporting roles in films like "Crocodile Dundee." She returned to New York somewhat broken. “I went into psychoanalysis.” By then, Rock Hudson had announced he had AIDS and the disease was soon a household world. Carlisle didn’t feel responsible for her and Tsukerman’s vision, but it haunted her nonetheless.

“I went to school to become an art therapist to help people who were dying,” she said. “I actually was so moved by it I changed my life. I said, I have to do something other than pursue acting.”

However, neither Carlisle nor Tsukerman let go of Margaret. Carlisle wrote a novel based on her character and Tsukerman began piecing together material designed to document the making of the film, whose status as both a prescient New York story and a fashion touchstone has grown over the years (a Liquid Sky boutique on Manhattan’s Lafayette Street operated for a while). The soundtrack by the un-trained Tsukerman — loud, atonal but funky — inspired the more abrasive elements of the Electroclash movement of the late '90s.

Innovative and influential as it is, one would assume that Liquid Sky is in the queue to become part of the permanent collection of the Criterion Editions or even MOMA, but in reality the original 35 mm film stock is decaying. “We need money,” Carlisle says. Tsukerman is racing time to raise the funds to restore the film, planning both a crowdfunding endeavor and completion on the documentary. Meanwhile there’s a sequel in the works — its working title is  "Vagina Warriors."

“We’re writing the script,” says Tsukerman. “We’ve stayed friends.” Carlisle is guarded about the story, but will say, “Margaret comes back and she changes other women.”

Meanwhile, in an age where society is exploring the nature of gender more rapidly than ever in history, a film like "Liquid Sky" certainly deserves a second life. “I hear it a lot,” says Carlisle. “People say that it changed their life. Especially people who were marginalized. They felt like they were not understood by anyone and then they saw this film and said. ‘Oh, no, there’s more like me out there.”

Post Script: The feature on Liquid Sky didn't mean to suggest that Carlisle invented her iconic look without any outside contributions — all films are collaborative and often multiple creative people do not receive the credit they deserve. After publication, Tsukerman reflected: "All the Anne’s and fashion show costumes were created by Production and Costume Designer Marina Levikova, as well as the interior of the main location and many other things. Her impact into creation of the film’s look is tremendous. So is the impact of the film’s DP and Special Effects Supervisor Yuri Neyman.  So is the impact of the make up artist and hear dresser Marcel Fieve, who created Anne’s face look."